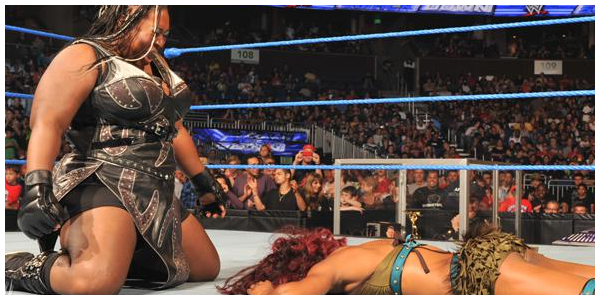 The title ‘What A Difference A Week Makes’ is basically the gist of this entire Redux. Think about what you were doing at this time last week and take a look at how far we have come in just seven days. Last week, Layla and Michelle were brawling inside the ring with one another until Layla (wo)manned up and challenged her former best friend to a match at Extreme Rules. Michelle accepted and added a stipulation that the loser would have to leave the WWE. At this time last week, all of us were still sitting on her hands wondering when the artist formerly known as Awesome Kong would debut in the WWE. I was a proud worshiper of Randygod. Christian had never touched main event championship gold. And as far as we knew it, Osama Bin Laden was still living large somewhere in the Middle East.

The decorated career of Michelle McCool is nothing more than another chapter in the history books. Layla is/should be the top face on SmackDown. Kharma is running rampant on both brands (as we will see later). I no longer support Randy Orton title reigns because it prematurely ended the first ever, and well deserved reign of Christian.

Oh yeah, that Bin Laden guy is dead, too.

So yeah, what a difference a week makes, right?

SmackDown opens up for the Divas by showing a highlights from the Layla/Michelle Extreme Rules match. The match itself still gives me chills for the sheer emotion it brought to the table. They leave out Kharma’s debut and when the show returns, the Lay-Cool theme song begins to play. I suppose we have to call it Layla’s song now, but anyway, the feisty little spitfire makes her way to the ring. She’s still sporting the word “Flawless” on her gear, which I love, and she plays to the crowd once she enters. After a second, her music fades out and is replaced by the sassy little beat belonging to new SmackDown Diva, Alicia Fox. Foxy sashays her way out to the ring dripping with attitude and beaming with confidence. She enters the ring, plays to the crowd as well, and gets settled for her first match on the blue brand in awhile. Once Fox’s music fades, the referee calls for the bell.

Layla and Alicia lock up with Alicia getting the early advantage and shoving Layla away. Layla seems game and nods, then goes back for more. Again it’s Alicia who takes control and she ends up muscling Layla into the corner of the ring after a nice uppercut to the jaw. She punches and kicks Layla until the smaller woman goes down, then she sloppily begins to choke Layla with her boot. The referee forces Fox to break the “choke” and Layla seizes the chance to catch her breath. When Alicia goes back for her, Layla smartly moves, and Alicia finds herself on the receiving end of Layla’s crisp offense.

Oh, the match is over.

Layla nails Alicia with her cute little spinning heel kick and an orthodox reverse neckbreaker. Alica goes down like she just got shot and is bleeding out, and Layla goes for the pin. She gets the three count and her first victory in the Post-McCool Era. Layla climbs to her feet and celebrates, and rightfully so. Alicia just withers around on the mat in pain. The referee bends down to check on Alicia and Layla goes to get out of the ring. Before she can leave, the music of Kharma hits. Layla’s jubilant facial expression turns to one of sheer terror and she wisely leaves the ring as Kharma ceremoniously takes off her jacket and walks down the ramp. A hurting Alicia winces as she gets to her feet with the help of the ropes. She doesn’t run but she never takes her eyes off Kharma. Layla backs up against the Cole Mine as Kharma gets in the ring. Not wanting any piece of the monster who’s destroyed Michelle and Maryse, Layla runs. She pauses half-way up the ramp because Kharma is watching her like a hawk.

With Kharma’s back turned, Alicia walks up behind her and kicks in the back. Kharma doesn’t flinch. But what she does do is slowly turn around and give Alicia the most menacing look I’ve ever seen. Foxy doesn’t back down but as we can all predict it doesn’t end well for her. Kharma literally separates Alicia’s shoulder with her fist and kills her with an Implant Buster. It’s a horrific scene that sends Layla fleeing to the back and it gives us all just another taste of what Kharma is going to bring to the table.

Kharma scares me. What I like most about tonight is that Layla used her head and got out of the ring. And that Alicia stood there and was ready to fight. Yes it ended horribly for Alicia Fierce but at least she didn’t cower in fear like Michelle and Kelly. Something tells me that Alicia would be the character that lasts for awhile in a horror movie, and Layla could very well end up being the heroine that makes it to the end, but enough with the horrible analogies.

The little match between Alicia and Layla was kind of sloppy when Fox was on offense. I wish I didn’t have to say that but it’s true. I still love her though, and it’s good that she’s on SmackDown. Layla got a surprising mixed reaction which bothered me a bit. She should go into the role of top face, so hopefully in the coming weeks she can get over as just that. What else can I say about Kharma that hasn’t been said? We’re going to see more of this until someone steps up and challenges her. Which Diva will that be? My money is Beth Phoenix and/or Natalya. It could very well take both Sisters of Destruction to subdue Kharma, and it’s not to far-fetched to think that it may happen. Kharma is after all the girls and she proved tonight she’s not biased towards Raw or SmackDown. I can’t wait to see how this story develops. It’s actually the only thing worth watching on WWE programming right now.

The words of a bitter fan…