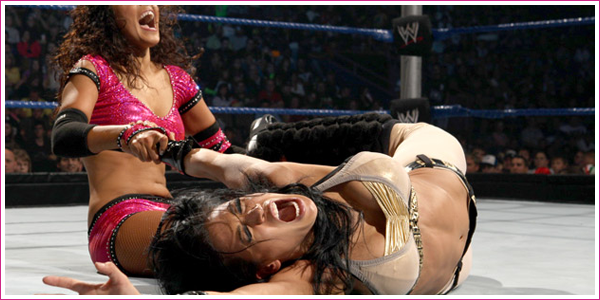 You might have noticed that I decided to forgo a Redux last week, as there was no match on the show, and analyzing a mere backstage segment with no real bearing on the women’s division would be akin to giving G.I. Joe a thorough character analysis–there just ain’t no point. However, this week’s SmackDown started off quite inauspiciously with what else but another MARIA-CENTERED BACKSTAGE SEGMENT!!!! *cue Psycho theme* Jump to the 1:00 mark to watch:

I feel silly for really “reviewing” this, but I figure it might lead to something eventually, so I’ll just go for it. Maria‘s gushing about Dolph, and Melina smiles, playing the supportive friend. It feels so strange to see her even care, since I’m so conditioned to her nasty heel attitude. At this point, I’d kill for her bitch side to take over–it’d keep segments like these to a minimum.

And just as I pray for daylight, Layla comes in to save the day. She plays the catty heel pretty well (“YAYYYYY FOR LOVE!”) and, like Melina did last week, warns Maria against Dolph, for for much different reasons. Apparently, the glorified Oompah Loompah twin is a hot commodity backstage, and Maria may not be hot enough to hold him. And shifting to more important matters, Layla delivers a message to Melina: Michelle will be back next week. It’s kind of funny, though, because it’s a minuscule version of what I suggested they do with Melina/Michelle/Layla earlier this week. Melina seems unenthused at the news, but I’m doing backflips. Melina tells Layla that she has a message for Layla to send back to Michelle, and she’ll give it to her in the ring. OH, IT’S ON NOW!

The match starts off all firey-like, with Layla going right for the attack. She full-on slaps Melina, showing her that even though she’s a heel, she doesn’t need to play the “scardey cat” routine. Oops, never mind, because Layla then turns and hauls ass, escaping from the ring, Melina giving chase. Melina has her by the hair, but Layla takes her down with a clothesline, slamming her down to the mat outside. She tosses Melina back into the ring and goes for a pin, but only gets two. Melina battles back, only for Layla to reverse an armdrag into one of her own, expertly flipping it into a pin attempt. Damn, that was cool.

She barely gets a two-count, and sends Melina to the corner, only for Melina to capture her in a leglock around the neck, topping it off with a chop to the head. She takes Layla by the hair, but Layla gets her right on the nose, causing Melina to fall back but catch herself on the ropes, ending up in a unique bent-over-backwards position. The fans oo-ed and ahh-ed like she was some sort of eccentric wire sculpture.

This sets her up perfectly (probably too perfectly, as it seems contrived, but it’s a pro wrestling match, so hush) for Layla to grab her hair and test her flexibility by pulling her like a rubber band against the ropes. She relents at the referee’s wishes, and Melina gains her bearings, trying to free her tangled boots and probably trying not to pass out from the headrush. Layla doesn’t give her much of a chance to do so, grabbing her by the head and sending her face-first all the way to the mat. Another pin attempt, another two-count.

Layla seems to have taken notes from the woman she’s playing carrier pigeon for, locking Melina into a leg-bending submission and making her tap-dance on her own head. Melina doesn’t just lie there, though, and attempts to free herself by grabbing a handful of Layla’s hair. Layla abandons the move, satisfied to just let Melina’s face eat mat. She grabs Melina’s prone leg and goes for a knee bash, but Melina gets free, going on an offense that’s extremely short-lived, punctuated by Layla laying the boot on Melina’s bum knee. Melina seeks refuge in the ropes, but Layla pounces on her, choking her with them. I’m going to just hazard a guess and say that Melina should steer clear of the ropes for a while–they don’t seem to be doing her much good.

Melina gets Layla off her back (literally), and puts her in a similar position, her throat draped over the second rope. Melina hops out onto the apron, kicking Layla in the head and then leaping to the top rope, taking Layla down with a high-impact facebuster. Surprisingly, this isn’t the end of the match, as Layla gets to her feet and is planted back down with a clothesline. A few bits of offense later, Laya finds herself in the corner, draped over the second rope. Layla’s midsection serves as a makeshift rope, as Melian stands on it to address the crowd before landing on it with both her knees.

Layla recovers a bit and wanders near the center of the ring, where Melina hits a sunset flip that Layla flips out of and nails Melina in the face with a dropkick. The fans seem to be getting into this. Layla goes for more offense, but Melina flapjacks her to the mat, going for a pin that doesn’t quite cut the mustard. Fast on her feet, Melina tricks Layla by hopping outside the ropes, ducking a blow, nailing her midsection, and sliding under her feet, catching her unaware as she traps her into the Primal Scream.
One ear-piercing scream later, Melina has the win in the bag. The three-count seals it. Melina celebrates her win for what seems like a long amount of time, but I can’t complain–the more screen time the Divas get after last week’s 3-second cameo the better.

For what seemed like an impromptu match, Melina and Layla kicked ass. They worked together quite well, and though Melina was clearly going to go over (Layla is only the messenger, after all), Layla put up a great fight. The match allowed Layla to look strong and intimidating, something she doesn’t get to do quite often when she’s stuck playing second fiddle in tag team matches. I can’t say I’d object to seeing more collaborations between Layla and Melina. One thing that struck me with this match was how it had shades of Melina’s matches with Michelle–high impact moves, back-bending submissions, quick footwork–and by the end of it, both looked wiped. That’s not to say they were winded or something, because it’s quite obvious that the intensity of the match simply took a lot out of them. It seems like Melina’s matches always exhaust both her and her opponent, and afterward they just need a good nap. I guess it’s becoming the signature of a Melina match–go for broke or go home.

I’m excited to see what becomes of Michelle’s return next week. We don’t know yet what her return will entail, as it’s possible that they’ll keep her out of in-ring action for the time being. Honestly, though, I wouldn’t mind. As long as Michelle’s there, that means that her feud with Melina is still going, and if they have to continue this rivalry outside the confines of the ring, I’m game. Just no more Dolph gossip, pleaseeeee.