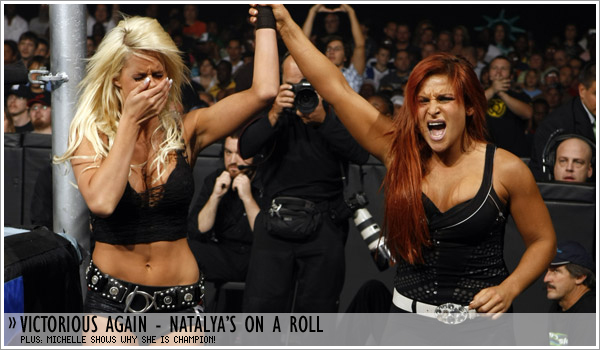 This week on SmackDown: Natalya and Maryse were victorious over Maria and Michelle McCool, with Natalya scoring the win once again.

After last week’s Olympic fiasco, I thoroughly enjoyed this week’s SmackDown match and it really did accomplish a few things… some intentionally and some not. 1) Natalya is still the most dominant Diva on SmackDown and is still being booked strongly as Michelle’s challenger for the Divas Championship. 2) Maryse really came into her own this week, showing all the signs of a truly believable heel. 3) Michelle really displayed her in-ring skills this week, proving just why she is the Divas Champ. As for Maria, well I guess we have yet to solve that problem.

While Maria may be the weak link, the other three Divas really showed a lot of progression and I found myself enjoying this match thoroughly. Seriously, I never ever thought I’d ever like Maryse, but she has grown on me so much and she continues to prove what a fantastic asset she is to SmackDown. I never thought I’d say that, Maryse is slowly becoming a “one to watch” among the WWE Divas, she’s developed at an exponential rate and this week was so much fun to watch with her little heel-ish poses. Maryse is coming into her own, sure she has a long way to go but I am really impressed with our Frenchie so far!

Natalya, ever the trouper, carried this match despite Maria’s slowness and has really been booked strongly over the past couple of weeks. Last week, she rolled up Maria and this week Michelle, proving to us that WWE isn’t done with the Michelle-Natalya programme, but can they please hurry up and give us a rematch or some sort of singles development? I think they’ve been booking all this tag matches of late as a vehicle to get both Maria and Michelle on screen because God forbid we have two Diva segments. While Maria and Maryse seem to be developing a feud, I am still awaiting some sort of development from the Great American Bash – sure Natalya’s won a couple of matches, but there has been no storyline development between Michelle and Natalya.

Meanwhile, I was so impressed with Michelle last night. Michelle has her detractors, but I urge them to watch last night’s match – I know that they will try and fault her anyway, but Michelle really delivered the goods on SmackDown and was a lot of fun in the ring. From the moment she was tagged in, the whole pace of the match sped up and her and Natalya seemed to work really well together. Michelle was just on fire! A lot of great fast paced action between these two and even Maryse a lil bit. Despite a slow start (thanks to Maria) this was a decent match and I appreciated the work of Maryse, Michelle and Natalya.

Maria: How do you solve a problem like Maria? Colour me puzzled!

Maryse: Great stuff from Maryse, she’s slowly becoming one of the best heels in the WWE.

Michelle McCool: This is why she’s Divas Champion, not because of who she’s screwing.

Photos
Below are digitals of the Divas match from SmackDown. Copyright to World Wrestling Entertainment, Inc.