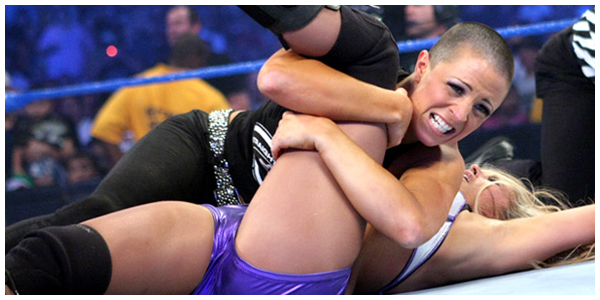 This week’s SmackDown saw the WWE television in-ring debut of one Serena, a Diva who has been much buzzed about ever since she was signed to a developmental contract last year. Why? Because Serena, prior to WWE, was one of the most talented young things on the independent circuit and shot to the top of the card in SHIMMER. The time has finally arrived for Serena to step into the WWE ring in a mixed tag also featuring Kelly Kelly.

As background context to this segment, in an earlier backstage scene, Luke Gallows and Serena were told by their stable leader CM Punk that if they didn’t win tonight, they would be kicked out of the Straight Edge Society. Would Serena and Luke go the way of the dodo and er, Darren Young from Monday night? Let’s find out…

Serena is billed as having trained hard over the past few months under the tutelage of Punk. We’re to believe that she has no previous wrestling experience and is a beginner in the ring.

Say what you will about the Big Show’s in ring work (*cough*), but for Kelly to be teamed up with one of the SmackDown brand’s top stars is a big deal and a huge coup for her. After all, the most that the Raw Divas can muster up is teaming with the Superstars roster.

We kick things off with Show and Gallows but Gallows quickly tags out to Serena which means it’s Diva time! Kelly goes to lock up with Serena but get a kick to the stomach and an elbow across her back. Serena picks up Kelly and begins screaming in her face but K2 uses her legs to kick free of Serena’s hold and hits her with a couple of really flimsy looking forearms. (Need some work on that K2). Kelly whips Serena into the corner, riles up the crowd and goes for her handspring elbow. Serena, meanwhile, sees the move coming and clubs her opponent over the back, knocking her to the ground.

Kelly tries to crawl to her corner to tag into Big Show but Serena kicks her swiftly in the midsection keeping her down. She goes for a pin but no dice. Serena then picks up Kelly only to club her across the back and right back down to the canvas where she then hits her with a couple of knees between her shoulder blades also. Another pin attempt but K2 kicks out. Serena taunts Kelly a little bit before taking the time to do a ‘Straight Edge salute’.

Serena then applies a submission hold as the crowd gets behind Kelly. The blonde rises to her feet and begins fighting her way out of the hold, hitting a jawbreaker on the Anti-Diva. Kelly stumbles to the corner, Serena tries to run at her but Kelly moves and Serena meets the turnbuckles. Kelly hits her with a Thesz Press next before straddling her neck and smashing her head against the canvas — except Serena’s head never actually meets the canvas. Well, this is awkward…

Kelly then hits her whirly-bird head scissors, but again, this one didn’t go well either. Serena didn’t land in the usual forward roll fashion, rather kind of stumbling on her side. Another iffy spot.

Kelly then kicks Serena in the midsection, hits the ‘X Factor’ and goes for a pin. Gallows, however, pulls her off Serena which results in Show getting involved in the match too.

In the midst of a fray outside the ring, Kelly goes for the K2 but Serena counters and hits a modified version of the ‘Go to Sleep’ connecting with Kelly’s midsection instead of her head. Serena wins!

So Luke & Serena live another day under Punk.

If I’m totally honest, I’m excited to see Serena debut in the ring and get the win, but the match didn’t do much for me. The two iffy spots were very noticeable to me — particularly Serena’s head not even touching the mat. The rest of their work together was fine and there were no miscommunications between the two which is a definitely plus — especially when you have two girls who haven’t really worked together before. But what they put together in the ring wasn’t memorable to me save for Serena’s finisher. Having seen her work elsewhere, Serena felt watered down in this match.

However, I have a theory — perhaps Serena’s style and move set were toned down due to the fact that she’s supposed to be portaying this girl who has only been wrestling a few months. Matt Striker noted how she had been training for the past few months since she debuted on SmackDown, so perhaps they wanted her to be more realistic and not have a technical, balls-to-the-wall match that we know she can right off the bat?

Still, it wasn’t a terrible match by any means. It was an acceptable.

Elsewhere, we had Michelle McCool and Layla in a backstage segment. Regardez:

The scene opens with Layla and Michelle boasting about what they did to Melina at SummerSlam. Layla says that Teddy Long is looking to punish them for what they did because he wasn’t happy. Michelle dubs Melina, ‘Lady Wawa’… Get it?

Layla mentions that they have something planned for Melina, because it’s “Flaw…” — oh wait, must check no one’s listening — “… less!”

After they leave, it’s revealed that Hornswoggle has been posing as a plant and has heard everything they said. Someone really should file a sexual harrasment suit against him…

What do Layla and Michelle have planned for Melina? Will we find out on Raw? To be continued in the Raw Redux with Steven…