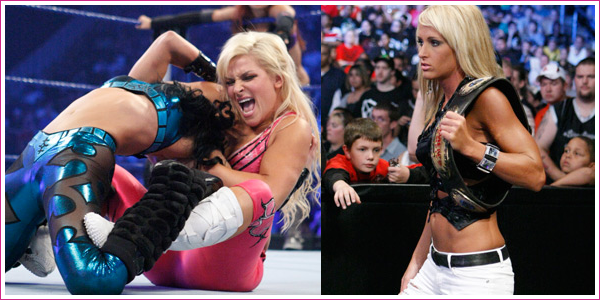 This week, we were promised the return of one Michelle McCool, Women’s Champion and recent victim of a knee injury. The details of her return were kept mum, so in what capacity will we see Michelle, if at all? Let’s watch and see if she turns up:

On the cards is a tag team match, teaming up Melina and her tag team partner (who we can only assume beat Eve in a coin flip) Maria. Going up against them will be Layla, Melina opponent last week, and Natalya, a Diva whom the WWE seemingly can’t decide if they want to wrestle or manage. This week, luckily, she’s on in-ring duty.

But who oh who makes the first entrance? Michelle! She makes her way (Gingerly? I couldn’t tell.) to the announcers’ table and takes a seat next to JR and Todd Grisham. We’ll see if they acknowledge her absence or just ignore the giant blonde hobbling elephant in the room. Melina and Maria then make a tandem entrance, and I wonder if Michelle visits Diva Dirt, because her first words on the duo express my sentiments exactly (“What is Maria wearing?!”). Gotta dig deeper than the obvious with these insults, Michelle.

A few more fashion-based insults pegged at Maria (Seriously, someone check Michelle’s browser history.), and Michelle shows a bit more charisma. Now, she’s not Trish Stratus or anything, but I sense some improvement. She just needs to work of her inflection and not sound dead-bored when speaking on the mic. As Layla and Natalya make their entrance, Michelle expresses some fondness towards who Todd describes as her “message girl”. Michelle refutes that claim, insisting that these past few weeks were just a vacation for her. Okay, so I guess the injury may not be as serious as once thought? You know, since they’re skirting around the issue and all..

But on to more the task at hand.. Maria and Layla start off the match. Layla takes an early advantage, hitting an impressive reversal into and arm drag and a pin attempt. Maria fights back, reversing an irish whip into one of the weakest clotheslines I’ve ever seen. I can’t believe that even knocked Layla over. Maria continues with some stock babyface offense, a clothesline here, a dropkick there.. Maria gets two-count on Layla and goes to tag Melina in, as JR suggests that some of Dolph might have rubbed off on Maria. I know that comment is meant to be a compliment, but after that weak showing, I can’t imagine it as anything other than a major diss to Dolph.

Melina receives the tag, and she and Maria perform some handy double-team work, ending with Melina dropkicking Layla. Layla, like last week, heads for the outside and escapes from the ring. Melina makes her trip a rather short one, tossing her back into the ring in a matter of seconds. This puts her in close range of Michelle, and this is seemingly enough to set Melina off. She shoves Michelle back into her seat, almost as payback for her skipping out on the last few weeks of SmackDown (“Bitch, do you realize that I had to listen Maria babble on for weeks, thanks to your ‘vacation’?”).

Layla comes out nowhere with a sick clothesline, punishing Melina for taking her focus off of the match. A face full of announce table and a toss into the ring later, and Layla attempts to end the match early, but gets only a two-count. Natalya gets tagged in, and pegs Melina with a sick clothesline of her own, turning her into a rag doll of sorts. She follows Melina around the ring a bit, toying with her, before standing on the back of her legs and locking her into a Mexican surfboard submission. After a few moments, she ups the ante and grabs Melina by the neck, craning it back. It’s an amazing-looking hold, but she almost pins herself, and switches the move off her of own back, and now instead of 9:00, Natalya’s head is at 12:00 on our Diva pretzel clock (Coming soon to WWEShop.com!).

Natlaya’s hold looks excruciating, and Melina sells it well, her arm flails slowing, like the blood is being drained from her head. Grisham remarks that Melina’s body must be made entirely of cartilage, and I get a gross Anatomy textbook image in my head. Natalya distract me from this gruesomeness by relinquishing the hold, smashing Melina’s face on that mat. I gotta say, with all this punishment her noggin’s taking, I wouldn’t be surprised if Melina needs a “vacation” of her own pretty soon.

She fights back, frantically trying to tag in Maria, but Natalya will have none of that, knocking her partner off the apron. Melina dodges a blow from Natayla and darts to the corner, coaxing Natalya over and trapping her into the Last Call. She nails it, and the referee counts to three. Glares are exchanged between Michelle and Melina, which we all know means in wrestling language, “You and me ain’t through yet.”

The match took a bit of a backseat to Michelle’s presence at ringside, so we didn’t see much in-ring work from Maria and Layla. From what little we saw, Layla is still improving, and is easing into a decent heel role on SmackDown. I hope she doesn’t get lost in the shuffle. Speaking of getting lost in the shuffle, Natalya seems to drop in and out of the Divas division based on the whims of the creative team, and it’s a shame. As made obvious by this match, Natalya deserves a major spot in the division. Whenever she gets ring time, she impresses me more and more. I really, realllllly hope she gets a proper shot sometime soon. The opposite could be said for Maria, who saw only a few moments in the ring, but managed to shock me with her lack of basic presence. I know we bash her a lot, but you can’t say that she doesn’t deserve *some* negative feedback on her in-ring work. She’s been in the company longer than most of the Divas roster, and yet cannot deliver a convincing clothesline. A CLOTHESLINE, for Christ’s sake. No wonder management seems intent on sticking her in a referee role–she’s got less a chance of embarrassing herself that way. She’s a long lost cause, I’d say.

But as for Michelle and Melina’s feud, I’m sooo happy to see it continuing. It’s still unclear how this will advance, as we can’t tell if Michelle’s 100% just yet. After all, sitting at an announce table and making bitchy remarks isn’t very convincing when it comes to selling her recovery. I guess, like always, we’ll have to wait until next week to see for sure. I just hope we aren’t setting ourselves up for weeks of “intense glares” and non-action. Though, I’d gladly take that over more Maria/Dolph-ness. I swear, the average WWE fan loses an average of 10 brain cells per minute during a Maria backstage segment. Compare that to the average 5 lost during a DX segment, and it’s clear that the WWE has some re-prioritizing to do. Please, WWE, think of the children!!