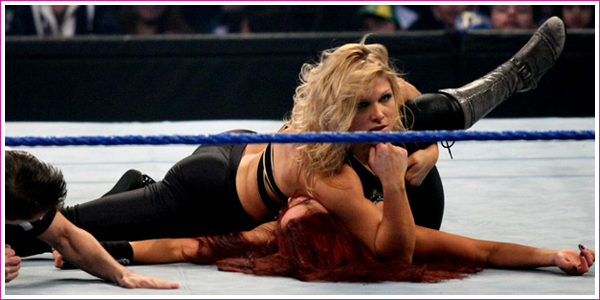 It’s been the biggest week of Maria‘s career with appearances on all three brands but it ended on a sour note on SmackDown, with Beth Phoenix not only defeating her but stealing the show. Things have progressed at rapid speed for the WWE Divas over the past week; this time last week, we were talking about Michelle McCool vs Mickie James at TLC — a match that has now passed and since then, all the talk has been about Maria’s Diva of the Year win at the Slammys and now we see the rise of the Phoenix, Beth Phoenix that is.

The Glamazon was the one constant for the Divas this week on SmackDown, appearing in all three Divas segments and receiving some much needed character progression. One thing was clear from the moment Beth began speaking though — this was not the Beth Phoenix of yore. It seems as though that face turn many of our readers have been hoping for may just happen as Beth came across as more of a tweener than the big bad heel we’re used to seeing her as. Watch a more docile Beth with Maria and Mickie below:

The segment starts with Maria and Mickie playing the latest SmackDown vs Raw game, complete with silly commentary. I loved Maria’s, “We got ’em both. Got ’em both!” Perhaps my heart is beginning to thaw this yuletide but Maria’s slapstick is beginning to grow on me. In comes Beth as the ‘mom’, rather than act like the brash heel we’re used to seeing her as, it was clear that this was a different Beth. A Beth that was less threatening and more nurturing. It reminds me of that rant on America’s Next Top Model when Tyra yelled at that chick. “I was rooting for you, we were all rooting for you.” Rather than get in her former rivals’ faces, she comes across as more of a ‘disappointed friend’. A clear sign that this is a new, tweener Beth. I really liked this segment, I have to say. Beth to me, came across as the voice of the people — the voice of the Diva fan. Sure it’s scripted but the way they’re scripting Beth is what the fans want and it shows that they aren’t out of touch with what the fans want because they have Beth here pretty much saying what’s on our mind. Again Maria cuts in with her humour, and again I’m amused. Damn you, Kanellis! The little ‘congratulations’ and ‘thank you’ between Maria and Mickie was cute too.

Next up, it’s time for ‘Beth goes roaming part two’ as this time she bumps into Layla and Michelle McCool.

Michelle tries to gain Beth’s favour by saying she hopes she and Layla didn’t rub her the wrong way upon her arrival to SmackDown. This then descends into another excuse for WWE to take jibes at Mickie James. Michelle shows some improvement here and there’s more inflection in her voice than ever before, she’s definitely working on adding more personality to her promos. I was quite tickled by Michelle calling Maria ‘underfed’, oh the irony. The “She ain’t getting no food” was just lame. Michelle’s ‘huge proportions’ line was well delivered but outdone by Layla, who was quite funny in her delivery. Anyway, the camera cuts to Beth Phoenix who realises that all the things they’re saying about Mickie could apply to her too and she speaks up. I’m glad they did this because it’s that old age movie convention — bullies never prosper. It puts all the weeks of ‘Piggie James’ crap into context in that eventually, Michelle and Layla will get what they deserve although it seems, not at the hands of Mickie, but rather at the hands of Beth. It definitely seems like this sets the stage for WWE turning Beth and having her feud with Michelle. And as face turns go, I think this is a very logical way to do it. The sensitive subject of a woman’s weight that WWE is exploiting on national television is disgusting and I think that many of the audience members will be waiting to see Michelle & Layla get their just desserts. Having Beth’s turn face coincide with that could be a genius move, because as a result of serving said just desserts, the crowd will be behind Beth and that will give her momentum. But while Michelle and Layla’s characters may have to pay penance for their actions, the WWE higher ups who are pretty much ‘script-bullying’ Mickie, will likely never get their just desserts. But I digress, that’s a story for another day.

Next we have the Maria vs Beth match:

Damn you, Kanellis some more because after last week’s monstrosity of attire choice, I’m feeling this week’s outfit a little more. The top can go, but the pants and the jacket are cute. It’s a little more understated than her usual attire and thus looks better. Maria most certainly looks better when she tones it down.

Anyway, it’s now time for Beth to pretty much beat the crap out of Maria for three minutes. I haven’t been a fan of their past matches on Raw, in fact I try to forget them so I can’t say I was looking forward to this one. Beth shoves Maria to the mat and then shoves her around some more and elbows her. Beth throws Maria into the opposing turnbuckle and charges at her, Maria manages to use the corner to kick Beth. She goes for a crossbody from the middle rope but is caught by Beth who hoists her over her shoulders. Maria whines and hits a few dodgy elbows to Beth’s head. Beth slams her down on the mat rather forcefully.

Fast forward a little bit, Maria goes for a small package but Beth kicks out. Maria hits a knee to the face and then spazzily jumps atop of Beth. Err, this is where the compliments end, Kanellis. Maria tries slapping Beth wildly and it all comes across silly and flat. I don’t think it was for comedic effect but I laughed. Maria manages to get on Beth’s shoulders, I’m guessing for a victory roll but instead Beth drops her right on her behind — ouch. I wonder if she’s got hers insured like J.Lo? Beth hits the Glam Slam and it’s all over.

Notice how after defeating Maria, Beth shakes her head a few times while looking down at the fallen Maria. It suggests that this wasn’t the straight heel-face match but rather, Beth wanted to teach Maria a lesson. She wanted Maria to fight and be worthy of her Diva of the Year award [as mentioned earlier in the show]. It was more of a disappointed look than anything else.

I love how WWE accomplished so much with Beth in just one episode. Going into the show, you wouldn’t expect to feel completely differently about Beth but I do now coming out of it. I think they’re handling a Beth tweener/face turn perfectly and we have an interesting set-up between her and the the babyfaces [through her disappointment in them] and the heels [a tease that she will shut them up]. I can only hope that WWE continue this next week with the same effort they’ve put in here. Going into 2010, the prospects for Beth look increasingly promising and the SmackDown division has a lot of interesting dynamics within it that have been set up. I hope they keep it up because the way they’ve started is gold and if they can continue on in the same direction leading to an eventual Beth-McCool match — WWE could have an epic feud on their hands.