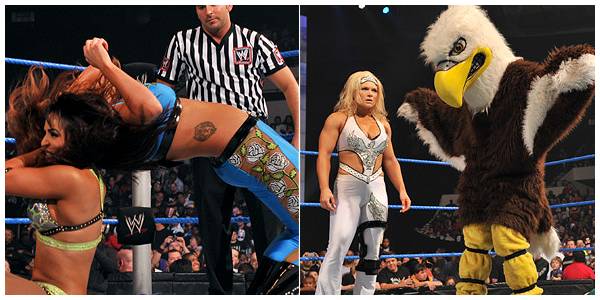 Last week’s SmackDown episode was forgettable especially since I have no clue what it was about. That’s pretty bad seeing as how I wrote about it. This week, we have another one-on-one Diva match featuring the little seen Rosa Mendes against one half of Lay-Cool. Lets take a look at how things went down.

Rosa Mendes is the first Diva to make her way to the ring and boy is her ring entrance a spectacle. From the ballroom dancing music to her little dancing, Rosa does her best to get a reaction from the crowd. She heads for the ring and gets settled, which leads into the Lay-Cool entrance. Layla and Michelle McCool make their way to the ring and Layla is the one who is dressed to wrestle tonight. They mock Rosa’s entrance and rightfully so, and Layla gets ready to get down to business. Of course business for Layla is making fun of someone so she turns to Michelle and starts to mimic Rosa’s salsa moves and jump rope skills. Rosa takes exception to this and kicks Layla right in the derriere. Layla crashes face first into the mat and Rosa picks her up by the hair and tosses her into the corner. A stunned Layla has to pick herself up by using the ropes. Rosa follows her to the corner but Layla is quick to rebound with a nice little kick and stiff clothesline. The Costa Rican is down and Layla goes for the cover.

Rosa makes her way to her feet and Layla levels her with a forearm shot. She starts talking trash which gets Rosa fired up, and Layla ends up getting slapped right across the face. Layla stumbles back towards Rosa, and the spicy Latina blocks a shot to the face and greets Layla with another resounding bitch slap. Michelle hops up on the apron and starts screaming at Rosa. The distraction allows Layla to get up and head for Rosa, who turns around. Layla slams her foot in Rosa’s gut which doubles the brunette over and Layla tries to whip her into the ropes. Rosa reverses it and sends Layla crashing into Michelle. The blond is knocked from the apron and Rosa quickly rolls up Layla.

Layla kicks Rosa right in the temple as both of them are on the mat. Layla picks her up and whirls her around, which puts Rosa in the perfect position for the Lay-Out. Layla’s finisher is beautifully executed and Rosa is pinned for the one…two…three. Michelle jumps in the ring and Lay-Cool celebrate their latest victory. As Rosa is recuperating, Michelle kneels down beside her and starts jaw jacking. Layla gets involved in the action and it seems like Lay-Cool are going to make Rosa their latest victim until someone decides to come to her rescue.

He yells at Layla and Michelle to stop, and like usual they yell back at him. In fact, they look pretty damn disgusted that Hornswoggle would get involved in their business. Layla wants to attack him but Michelle puts a stop to that. Both girls drop to their knees so they can be at eye level with the little creature and they put their fists up ready to fight. Hornswoggle backs away and Michelle and Layla lock arms and begin to dance around.

Dressed in all white, Beth Phoenix rushes the stage. Lay-Cool jump out of the ring and go to greet her. Beth has come to fight and she throws Layla into the guardrail. Layla hits the ground with a thud and Beth turns her attention to Michelle. She tosses the leggy beauty into the ring and jumps in after her. Michelle is quick to get to her feet and she starts backing up, pleading with the Glamazon to just chill out. Hornswoggle is down on the ground and Michelle, of course, falls over him and onto her butt. She scrambles out of the ring, while Layla gets in, and the former British-born Women’s Champion attempts to attack Beth from behind. Beth makes Layla rethink that decision by absolutely nailing her and Layla gets the heck out of dodge. Lay-Cool are out and Hornswoggle and Beth shake hands. New friendship?

The segment isn’t done, however. Jack Swagger’s eagle makes its way onto stage. Apparently it has a bone to pick with Hornswoggle over the leprechaun shooting it last week. The eagle gets into the ring and begins harassing the thing that tried to kill it last week. He does a little dance, picks on ‘Swoggle, and just pisses the little guy off. Hornswoggle wants to attack it, but the bird lays him out with a kick to the face. The bird celebrates its good deed and ends up backing into Beth who isn’t smiling. She picks the bird up and makes it eat a Glam Slam right on the beak and beckons for Hornswoggle to go up top. She gets the crowd going as ‘Swoggle scales the top rope and flies off for a perfect Tadpole Splash.

Stick a fork in the bird. It’s done.

‘Swoggle’s music hits and he hugs Beth. She bats him off but they end up celebrating together. The scene fades to a promo for Edge and Kane.

Random Observations: Well two things I never thought I would do while working for Diva Dirt; recapping a Rosa Mendes match and writing about Beth Phoenix abusing animals. I’m not sure if I have any thoughts on this subject matter but for the sake of this column, I reckon I should come up with some, right? As far as the match goes, it wasn’t bad. It was short, to the point, and Rosa actually looked decent. I’m not exactly a fan, but she’s not exactly awful like she was on Raw way back when. Her entrance was truly the worst thing I had ever seen (then I watched Impact….) but she made up for it with her aggression and sharp offense. You know, once upon a time Rosa Mendes was the OVW Women’s Champion. She’s been doing this for awhile. I find it kind of sad that the WWE has never really used her. She’s been on television for a few years now and we’ve only seen her a handful of times. With Beth back in the fold on SmackDown, maybe the WWE should give serious consideration on re-uniting these two.

The WWE really seems to be going for a Lay-Cool/Beth feud and I’m fine with that. They have the history and Beth deserves revenge. The storyline is that Lay-Cool injured Beth and this feud is just a natural progression in that story. Beth can’t fight off two girls every week, no matter how strong she is. Sooner or later the numbers will get the best of the Glamazon and why not have Rosa as her partner in this? I’m sure Kelly Kelly is the first choice and I’m not stupid enough to feel that Rosa will be favored over the WWE’s favorite smiling face. But Kelly needs a chance to do her own thing and maybe star in her own storyline. Put Naomi on SmackDown and maybe let her and Kelly team or feud. I can’t believe I’m writing this, but I’d like to see Rosa have a chance to show what she can do. It’s time for Rosa to sink or swim. Personally, I hope she swims. She has to love this business or else she wouldn’t have been doing it for this long. OVW and the WWE severed ties awhile ago. Rosa has been with the company since they partnered with OVW.

Of course, this is the WWE. Kelly will likely never get her own storyline and Rosa will go back to jumping rope and burning turkeys. Hornswoggle will end up being Beth’s new tag team partner. Ahhh. Gotta love World Wrestling Entertainment.

In other SmackDown news…

NXT winner, Kaitlyn, made a brief appearance at the beginning of the show. She was backstage when Vickie Guerrero and Dolph Ziggler showed up. Vickie was going on about how glad she was that NXT was done, and how she couldn’t believe that her rookie had actually won the competition. Vickie commented that she was glad herself and Dolph were finally rid of the blonde bombshell.

Of course that’s when they spy Kaitlyn. Vickie demands to know why the NXT winner is on SmackDown and Kaitlyn calmly replies that Teddy Long must not have told Vickie the great news; she is SmackDown’s newest Diva. Vickie is livid and walks off while Dolph lingers for a bit. He congratulates Kaitlyn on her victory and looks like he wants to say more, but Vickie screams at him and he has to rush off.

SmackDown was fun this week. It totally trumped Raw in my humble opinion. The eagle/Hornswoggle crap was silly, and yes, I could have done without it. But oh well. Beth was back in a Glamasuit. Somewhere “Dashing” David is sipping chardonnay and smiling.