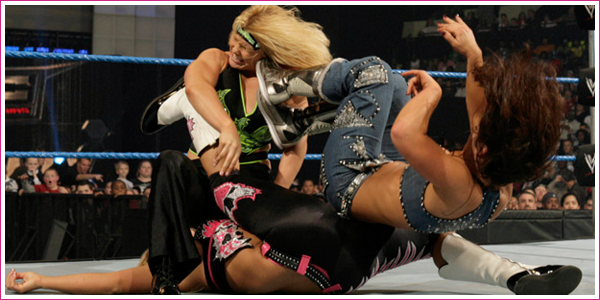 Congratulations are in order for the Divas of SmackDown as I can positively say that this week’s episode was the best Divas action that I’ve seen in quite some time. From the #1 Contenders Match featuring three of the most talented women in the WWE, actual storyline set up afterwards and the return of a Diva — WWE managed to pack a lot into 10 minutes [which is pretty long for a Divas segment on TV] but it all came across as being important. Watch the action below:

On paper, the triple threat match between Beth Phoenix, Mickie James and Natalya seemed full-proof and it was. The work between all three Divas was fantastic, particularly the interaction between the power houses of WWE’s women’s division — Phoenix and Natalya. The way the pair cleared the ring of Mickie James in the early going and then fought among themselves was a great touch. Natalya is probably one of the most talented Divas to ever step foot into the WWE but hasn’t received the same opportunities as Phoenix or James. If we didn’t have spoilers prior, Natalya would be the one I would be rooting for — and to be completely honest, even though I knew the outcome, I still kind of did hope for her to win!

Some beautiful spots in this match including Mickie’s hurricanrana on Natalya, and Natalya’s discus clothesline on Mickie. But perhaps the most impressive is Beth’s effortless Glam Slam on a woman that equals her in stature. A fantastic spot.

The end sees Mickie James dropkick Beth out of the ring and ‘steal’ the victory. I really liked Mickie’s placement in this match, she couldn’t conceivably be considered as physical as Beth or Natalya, so they used her as a scrappy underdog fighting against the larger Divas.

Meanwhile, the real greatness in this match was the work between Beth and Natalya. I’d absolutely love to see a secondary between these two as a result of this week’s show, in addition to Michelle-Mickie. With Beth squashing Divas left, right and center, here she got an opponent that can step toe-to-toe with her and have a knock-down fight with. Perhaps market Natalya as almost an equal to Beth and see which Diva comes out on top.

In addition to the match, we had storyline advancement in the feud between Mickie James and Michelle McCool. I don’t understand why Mickie needed to win a No. 1 Contenders Match to get a shot at the title when she had clearly been the
uncrowned #1 Contender. And surely, beating McCool’s team at Survivor Series could be enough reason to give her a title shot? Nonetheless, I really enjoyed that we got to see some real tension with that post-match promo. Mickie taking the mic really added some personal animosity to this feud and it seems that for the first time in a long time, we may actually get a storyline rather than just a feud between two Divas. While Mickie’s promo skills aren’t the most convincing, I think her intonation was there and she got across the emotion her character was feeling in those words.

The attack after, again, was nicely done and sold the animosity. Meanwhile it also sets up the return of Maria, who has been unofficially on leave. I can’t particularly say I’m looking forward to Maria wrestling in the near future but even I’ll admit, it’s great to see WWE acknowledging her return and having her come back in a meaningful way. She may not be my favourite in-ring performer, but I have something of a soft spot for Maria [as a person] — maybe I’m getting soft? It was kinda nice to see her back. Shock horror. I’m sure I’ll be over it by the time she tags in during next week’s inevitable tag team match!

All in all however, I think WWE ticked all the boxes this week: great match, great storyline set-up and though it is a tried, tested and perhaps cliched return — I much preferred this one to Maryse‘s.