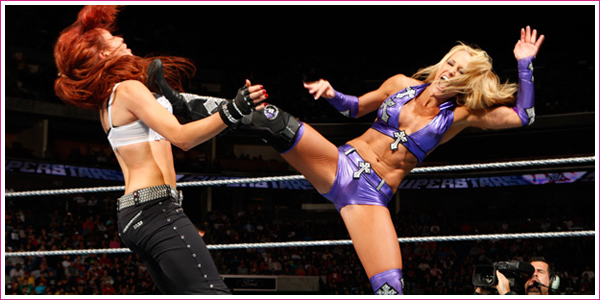 Following a bust-up between Maria and Melina on last week’s Smackdown, one would assume that the two wouldn ‘t be in the same corner from here on out. Not so fast, though, because this week on WWE Superstars, they’re doing just that, teaming up to face Michelle McCool and Layla. Let’s see how these ex-BFFs fare against the fast-forming friendship of Michelle and Layla:

As the match starts, Maria still doesn’t seem too pleased with Melina, shooting her a look as she heads out of the ring (What is she, 12?). Michelle starts out the match for her team, and she and Melina circle each other before meeting with a tie-up, Michelle taking advantage. She locks Melina in a belly-to-back hold before Melina breaks out, but is met with a knee to the stomach, Michelle then slamming the back of her head to the mat. After a braced knee to the face Michelle attempts a pin, but only gets 1.

A few knees and punches later, Michelle irish-whips Melina, and Melina uses her momentum to her advantage, spinning out of an attack and ending by planting Michelle’s face to the mat. It almost looked like a hurricanrana/face plant hybrid of sorts. (A hurrican-face plant?) A stunned Michelle sits up, only to be met with a low dropkick. She scurries to her corner, tagging in Layla.

Layla comes in like a bat out of hell but Melina bends back, avoiding a clothesline. Layla turns around and attempts a kick, but Melina blocks it with one of her own, continuing with this diversion a bit before planting Layla to the mat and tagging in Maria. Maria comes in quick, performing a flipping head plant on seated Layla. She then delivers a fist to her head in a split maneuver, going for the pin but barely getting 2. Layla reverses an irish whip, but Maria stops her momentum with the ropes, kicking her in the face. Maria goes to bounce off the ropes but Michelle makes a grab for her hair. Maria takes the bait, turning and taking a swipe at Michelle. Layla takes advantage of this distraction, booting her in the stomach as soon as she turns around, twisting her into a neckbreaker. A pin attempt, and a 2-count.

Layla tags in Michelle, stretching Maria out like a canvas so Michelle can kick her a few times in the midsection. Michelle continues to use her knee brace as an unofficial weapon, knocking it against Maria’s skull. She attempts a pin, but only gets 2. She mounts Maria, pounding her head against the mat, whic hthe referee takes offense to. (Oh, she can’t grab her hair, but she can use a hard knee brace to strike with? Okay, solid logic..) She keeps messing with Maria, kicking her around and practically stepping on her as she crawls around the ring in a daze. Maria heads to the safe haven of the ropes, but Michelle decides it isn’t a safe zone, choking her against the bottom rope with her knee. Choking Maria some more, she drags her closer to her corner, choking her against the second rope this time. After driving Maria into the corner, Michelle tags in Layla.

As Layla enters the ring Michelle chokes Maria, her boot planted firmly under her chin. Layla takes over, kicking Maria in the stomach and performing a modified snapmare, keeping a grip on Maria’s left hand. As Layla locks Maria into a sleeper, Melina yells from ringside, trying to encourage her teammate.. (Somehow I think Maria’s not conscious enough to her ya, Melina, even with your scream.) After a bit Maria tries to free herself, bumping Layla away, but Layla slams her down to the mat, preventing her from gaining a full escape. She pulls her up by her hair and locks her into the same hold, furiously latching onto Maria. Maria is starting to look drowsy, whipping her arms around frantically and then drooping. She slowly gets to her feet, fighting free by hot-shotting Layla’s chin onto her shoulder.

This gives her enough time to rush to her corner, but her drowsiness gives her the speed and agility of a zombie, so she doesn’t stagger too far before Layla catches her and slams her back onto the mat. Layla looks to improve her odds and goes after Melina, striking her and sending her flying off the apron. This leaves Maria all alone and the referee occupied, and Michelle comes in for the sneak attack. As Maria gets up and turns around, she’s met with a McCool boot to the chin, and it’s lights out. Layla pins Maria, getting the 3-count.

Michelle and Layla celebrate as they make a quick exit, an irate Melina quickly entering the ring. McCool and Layla are buddy-buddy as Melina tries to apologize to Maria. (How many times is it now? 37?) Maria isn’t having any of it, just shaking her head and showing her frustration.

This match was basically a reason for Maria to distrust Melina even more, as she played ragdoll for Michelle and Layla–pretty effectively, I might add. She sold everything well and grew increasingly slow on her feet as the punishment progressed, believably selling the damage throughout the course of her isolation from Melina and her corner. By the time the bell rang, Maria’s bell had been rung plenty of times, taking a sick boot from Michelle and a few knocks from her knee brace. Michelle seems to be wrestling pretty well, all things considered. Her heel act only seems to be improving with her knee injury, as her brace is pretty much a built-in weapon. Layla’s taking to the role of fiery heel pretty well, screaming and fiercely attacking Maria, almost like a wild animal.

Everything gelled pretty well, and they managed to tell enough of a story in the match so that, even though SmackDown will be Diva-less this week, they won’t be worse for the wear. They progressed the story and had some decent action, and they didn’t need a single melodramatic backstage segment to do it. Just the way I like it..