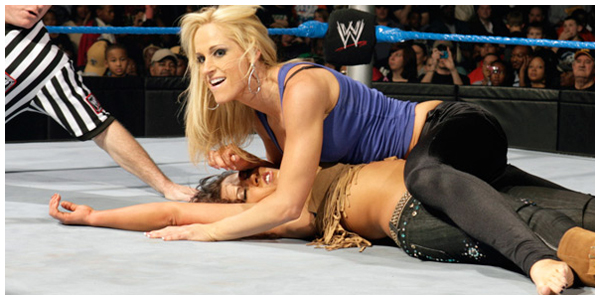 After humiliating Michelle McCool and Layla at the Royal Rumble and snaring the coveted Women’s Championship on the same night, you’d think the jibes and taunts at Mickie James‘ expense would be over by now. Wrong. It’s evident that SmackDown has hit a creative roadblock as we seem to be going around in circles with little to no new storyline progressio — same old story. Watch this week’s action below:

In the ring then, we’re ready for Mickie vs Layla with James getting in a few forearms and a low dropkick before the match is stopped by Guerrero. Looks like Mickie is set to catch hell from Vickie. Guerrero makes the match a handicap match and as if by magic, Michelle is already taking off her hoodie, belt and shoes. As McCool gets in the ring, she’s attacked by Mickie who then fights back with a kick to the stomach as Layla gets her licks in. Mickie is thrown against the ropes but comes back with a kick to Michelle and slams her face first to the canvas. She then follows through with a Thesz Press on Layla. Michelle comes at her, Mickie sweeps her off her feet and goes for a bridged pin but Layla hits her with a low dropkick, breaking up the pin.

Mickie tries to fight back against Lay-Cool but is overpowered by McCool who hits her with a spinning backbreaker. Mickie is thrown into a corner and McCool hits a high knee. Layla then has her turn but is thrown over the top ropes by Mickie who then hits her with a forearm. She hits McCool with an elbow and goes for her patented headscissors from the corner but Layla grabs her hair. Mickie is forced to let go of the hold on Michelle and then kicks Layla off the apron.

Michelle comes charging at her with a huge [barefoot] big boot and a Faith Breaker for the win.

Honestly, there wasn’t much to write home about with SmackDown this week and it doesn’t seem as though the writers know where to go next other than setting up an obvious rematch for Michelle McCool. The inconsistencies that much plague Raw are creeping through to SmackDown with ADD-like booking, not following through on what happened last week. Where the hell was Beth Phoenix? After playing such a huge role last week, taking out both Mickie and Michelle, it served no purpose to drop her this week and not pick up on that. It seems like their priority changed between last week’s taping and this one, with Beth now being dropped in favour of a straight rematch between Mickie and McCool. No doubt that will probably change again soon next week.

I do however like the inclusion of Vickie Guerrero, who now seems to be gunning for Mickie just as much as Lay-Cool. It is about time her evil, villainous character was extended to the Divas division — I mean she is a woman herself. Who better to add heat to a storyline than Vickie Guerrero? I’d love to see her fully align herself with Michelle and Layla, hopefully rubbing some of that heel heat onto those two. There are again inconsistencies here as Vickie is often teased on WWE over her own weight, why would she be siding with Lay-Cool? I guess it’s the old Diva mentality that all babyfaces are BFFs and all heels are BFFs. I’d like to see McCool and Layla sort of ‘butter up’ Vickie to get what they want i.e. to get the Women’s Title back around Michelle’s waist.

In all though, it was an okay effort but it really does seem like we’re going around in circles at this point. The problem is there are no payoffs on the books for the Divas, so they don’t know what they’re gearing towards and they end up throwing away weeks of programming with filler, which is what I think this is storyline wise. If they had a clear end date i.e. WrestleMania, they could plan backwards and know what they want to do every week to build up the storyline. There’s no telling what the Divas match will be at ‘Mania at the moment, so there’s nothing to really plan for.

I’m not holding my breath for any new storyline development until after the Elimination Chamber pay per view when they begin firming up plans for ‘Mania at which point we’ll finally some development or as the case be, the end of this storyline in favour of a new one going into the event. Until then, it’s a waiting game and we’ll likely see more of the same next week.