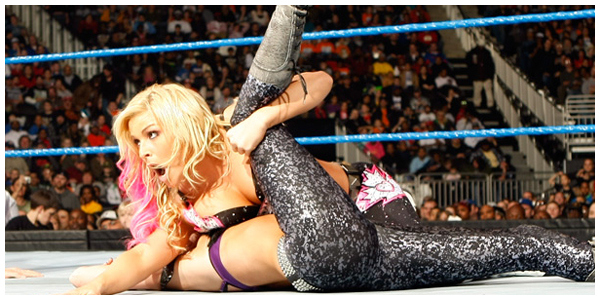 After concentrating on a single storyline for the past few months, this week’s SmackDown felt more in line with the mixed bag that we once saw on SmackDown pre-Diva Trade. There was a little bit of this mixed with a little bit of that and it just felt like WWE were trying to accomplish all too much with the Divas without any real substance to it ala a time when we had Michelle/Melina, Maria/Ziggler and Maria/Melina. It may seem cool to indulge in all of the Divas but after growing accustomed to a single storyline developing over weeks with plenty of effort, it feels like a step back to me.

First of all this week, we have new Women’s Champion Mickie James backstage with Vickie Guerrero apologising for last week’s incident:

Mickie comes into the office to apologise to GM consultant, Guerrero over the splatting incident last week but Vickie isn’t so accepting. She tells Mickie that she’ll face Michelle McCool next week, defending her Women’s Championship and the catch is that Vickie will be special guest referee. As I’ve been mentioning in the past couple of weeks, I really love the use of Vickie in the Divas storylines because she’s a woman herself and is in power, so it’d make sense for her to have a vested interest. It’s also interesting to have a storyline where the heel GM kind of exerts her authority over one of the talents and kind of makes their life hell — if done right, this could be a fun Diva version of Stone Cold vs Vince McMahon. My only fear would be that Vickie overshadows a ‘real’ Divas storyline. I could totally see them going for a gimmick match of Mickie vs Vickie at WrestleMania. While a step up from Santina last year, it would once again cheat us out of our desire to have a competitive, great Divas match on that big event and this year it seemed we were so close with the Mickie/Beth/Michelle storyline.

Speaking of which, once again Beth is noticeably absent from SmackDown despite being part of a big angle at the Royal Rumble and then being part of a big moment in the storyline the week after. I don’t know if there’s a bigger backstage thing going on here but I don’t know what else could explain them dropping the ball like this. There really is no excuse to just stop what was great development for Beth. Such a waste.

Next up, we have six person tag team action:

Wait so… Maria and Matt Hardy are a thing now? And Matt Hardy and Great Khali are a thing now? This has to be the most random looking group WWE has put together in a long while. So after Maria somehow aligned herself with Hardy & Khali last week during a tag team match with the Hart Dynasty, this week it’s the obvious six person match. Watch below:

It’s always great to see Nattie in the ring and she kicks things off with Maria, first with some light taunting and then showing off her sheer dominance with a belly-to-back takedown on the ‘Fantasy’ singer. She then grabs Maria by the hair and kicks her face down to the canvas not dissimilar to a certain Future Legend’s curb stomp. Nattie applies a side headlock but Maria fights out, she throws Maria against the ropes but Maria counters with a kick to the face. Maria then hits a drop-toehold and Nattie falls into the middle rope in a 619 position. Maria then uses Natalya‘s back for a step-up and comes crashing down on her. Meanwhile, Nattie seemingly a step ahead tags out of the match meaning it’s now the guys’ time to wrestle.

Some fast forwarding later, things break down with all four men on the outside. Maria has gotten a tag off Matt Hardy. She’s stood on the apron kind of unsure what to do but again, Natalya is a step ahead, sneaking up on the Diva and bringing her into the ring hair first. Nattie then hits a beautiful discus clothesline, sold just as beautifully by Maria for the 1, 2, 3.

I would have definitely liked to see more of Nattie and Maria in this match. I think they both did a fabulous job — who knew they could find that right chemistry? Maria is so much better when she’s in the role of the underdog, taking punishment from a forceful Diva like Natalya. Natalya beating on her makes her look like a million bucks, moreso than her being on the offensive I think. I’d like to see a full length match between these two and I don’t say that well, ever, about Maria. I think they could have a good singles match. Natalya is just a great powerful wrestler that just makes every move look believeable and that discus clothesline is perfect for her.

Not enough Divas but decent.

Finally this week we have a backstage segment:

Gag! Apparently two of WWE’s most hapless romantics are hooking up — well it makes sense. Neither has really had much like in dating their other co-workers. Just as Matt Hardy is about to kiss Maria, thankfully we’re saved by Layla and Michelle McCool leading to your standard Lay-Cool segment. Frankly, this segment had me rolling my eyes because I’m over the whole ‘mean girls’ gimmick that Michelle and Layla are doing. I think the fact they emphasised the word ‘cooties’ like that just proves it’s time to stick a fork in it. I mean, seriously… they’re grown women. Cooties? Really? The act is beginning to become desperate and needs to go out while it was somewhat entertaining.

I felt there was a lot of different stuff going on this week but I didn’t like it for some reason. It’s nice to have variety and all, but I’d like to see them to pick one angle or one storyline and put all of their effort into that. SmackDown needs to find it’s direction again.