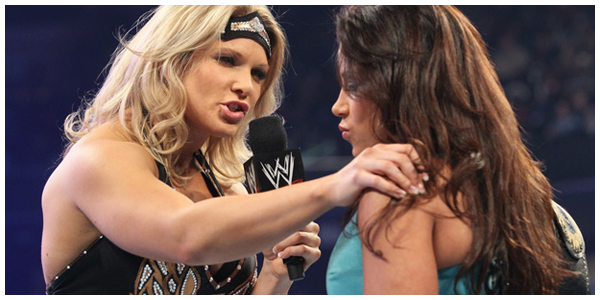 With a new Women’s Champion crowned at the Royal Rumble in Mickie James, it seemed like a new era for the SmackDown Divas division. Not quite. Despite a new champion, we still have the same three-way problem though slightly altered: Beth Phoenix wants the title, Michelle McCool wants the title and Mickie James wants to keep the title. A three-way match between these two had been teased in the early weeks of January but somewhere along the way, the focus shifted back to Mickie and Michelle leading to the Rumble. But now it looks like we’re once again on course for a triple threat scenario. New champion Mickie found out on SmackDown this week that being champ ain’t easy:

Mickie has been Women’s Champion five times now but how many times has she gotten to give a post-win promo? Not many. Already, her fifth run is off to a great start as Mickie gets to do the whole “We did it!” pow-wow that we see from the men. As can be expected from such a paint-by-numbers speech, just as she talks about anyone challenging her to go ahead — she’s interrupted. The Glamazon, Beth Phoenix, fresh from using her feminine wiles~ to eliminate Khali in the Rumble match, is out to boast about doing so. Really, Beth? You’re going to brag how you acted slutty like it’s a good thing? I kid. Kinda. Tangent: I didn’t really comment on the whole Beth-Rumble thing so I’ll do it here. I think it’s great that she was in the Rumble and got a big moment but of course it had to be played out with the most cliched tactic in the world. Somewhere a woman is burning her bra in anger.

Anyhoo, Glamazon says she can take Mickie’s title whenever she wants and as things are about to pop off, out comes Vickie Guerrero. Hey Striker, where are the fat jokes for Vickie? Anyway, Vickie says it’ll be the two of them versus the ‘true number one contender’ Michelle McCool and Layla.

Out come Lay-Cool in cute matching hoodies and for a second there I thought they were gonna emulate the Beautiful People entrance but thankfully, they didn’t bend over and touch their toes. Michelle McCool surprisingly graces the SmackDown ring with her presence this week, her first full-length match on the show it seems in quite some time. And if the prospect of Beth vs Michelle isn’t tantilising, I don’t know what is. Beth shoves Michelle to the mat with great force before picking her up effortlessly and tossing her to the canvas. Beth throws Michelle into the corner and hits her with a butt bump and shoulder blocks. Michelle counters with a low dropkick to Beth’s knee, taking her off her feet and giving McCool some momentum.

McCool is now in control, dropping a few elbows in the knee joint of Phoenix before going for a quick cover. The former Women’s Champ then applies the awfully named ‘Make a Diva Tap’ or ‘MAD T’. For a former school teacher… that’s the best you could do? Beth flicks Michelle off and the two then stumble to their feet at which point Phoenix runs at Layla in the corner, knocking her off the apron.

Back in the ring, an angered Michelle goes for a strike but Beth blocks it and grabs McCool running into her team’s corner and crashing her into the turnbuckles. Mickie tags in and applies an armbar on Michelle but out of no where, her tag team partner Beth clocks her and she falls to the canvas. Beth then follows through and wipes McCool’s clock clean too.

Beth walks off, leaving her partner at Lay-Cool’s mercy. Layla tags in and goes for a pin but Mickie counters into a small package and sneaks a victory at the last second.

After the match, cue questionable facial expressions and lingering death stares between the Divas.

Fresh off her star turn at the Rumble, it seems the focus is once again firmly on Beth Phoenix with her factoring into this feud more than ever. I said last week that I wanted Mickie to win the title, the ‘Piggie’ jokes to be over and for the emphasis to be put on Beth — and that’s exactly what we got. The focus has thankfully shifted from making fun of Mickie to adding the Beth dynamic. She’s not quite Team Mickie, she’s not quite Team Michelle — she’s out for herself and can’t be trusted by either party. This should make for an interesting three-way feud.

The promos from Mickie and Beth were pretty by the numbers and nothing special, though adequate. I would have really loved to see some more Lay-Cool here, especially after what happened to them at the Rumble. A backstage segment with a Superstar making fun of them, maybe Mickie giving them a taste of their own medicine with blown-up pictures of their ‘caking’ — something backstage with those two would have been great.

There’s honestly not too much to take away from this week’s show, we’ll have to see how it develops over the coming weeks. I wouldn’t say this was a standout week for SmackDown as has been the case recently. I think this week was average/adaquete for now.

Food for thought: How long do you think Mickie’s Divas Championship reign will last?