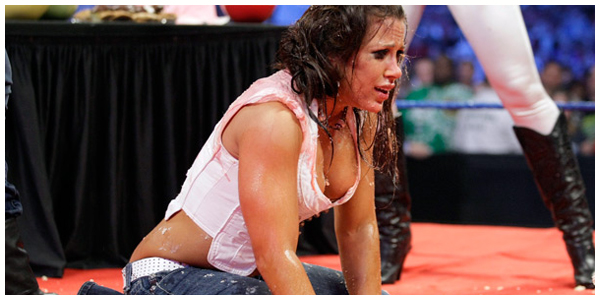 It’s official: this is where women’s wrestling is at. SmackDown, in my humble estimation, is now the premiere series to be watching if you are looking for women’s wrestling on your televisual boxes. That was never more evident than tonight’s episode, where despite not even having a match, SmackDown proved that it is the show that everyone should be watching. Compelling storylines, well written characters and great performances — it’s hard not to do double-take. This is WWE, right? Despite the recent years of fluff and disappointment, WWE have delivered perhaps one of their strongest Divas storylines in quite some time and this week’s show is a seminal moment in what I expect will be a turning of the tide. There’s nothing Diva-y about this week’s SmackDown, to spin the old line used by WCW — this is where the big girls play.

Beginning this week’s Divas action, we saw the debut of Serena Mancini in what may go down as one of the most memorable debuts in Diva history.

Serena appears as a fan jumping the barricade during another scintilating straight edge promo from CM Punk, claiming she needs him. He says she knows he needs him. Honestly, the initial dialogue was as cheesy as a Twilight movie and I was expecting Punk to throw in a “You are my life now” at some point. That said, it did get better and Punk is golden at his whole shtick. We see Serena willing to make the ultimate sacrifice and denounce her life of addiction etc. and has her shaved head in the name of her saviour, Punk.

All in all, I think this was a good segment and Serena played the cult-like psycho very well. It’ll be interesting to see how she’s used from here with her bald head. I hope this works out for her, it’s a great sacrifice to make but she’s in the big leagues now. I hope she didn’t sacrifice this just to be the glorified bald manager for Punk’s Straight Edge Society. The setup of that group doesn’t really suggest to me that it’ll have a typical manager/wrestler dynamic ala Hart Dynasty. I expect we’ll see Serena actually getting nitty-gritty and I look forward to it. Perhaps she herself could target a Diva and try to ‘help’ them?

Next up, Mickie’s ‘going away’ party:

Not since the days of Trish [you know, when WWE actually cared about writing for the Divas] have we seen a promo as elaborate as this. The Divas got to be part of an in-ring segment complete with props with the red carpet and table of food and also received plenty of time for their spot. What the Divas accomplished in this segment, I feel, is much more than what could be accomplished in a standard Divas match that we see every week. As I wrote earlier in the column, I feel this was a seminal moment for this feud but also for the WWE Divas. WWE has shown here that they can write good stuff for the Divas because this was extremely strong.

Michelle & Layla decide that tonight is Mickie James‘ last night on SmackDown and throw her a going away party and we see some funny banter between them before Maria hits the ring. I have to hand it to Maria, I thought this was the promo of her career — she was extremely convincing and didn’t come across as the ditzy girl or the unlucky in love girl, but a strong female.

Mickie then comes out and cuts the promo we have been waiting on for weeks, telling Michelle and Layla that all women of all different shapes and sizes are beautiful. If only WWE believed that. Mickie’s promo, again was well spoken but I have to say, I preferred Maria’s.

Mickie goes after Layla and then Michelle as all hell breaks loose before the Glamazon, Beth Phoenix hits the ring and chooses Team Lay-Cool after weeks of ‘will she turn face?’. Disappointing as I had hoped Beth would move away from being a stoic heel as she has been in the past few years.

The moment when Michelle hit Mickie in the face with the cake and then dumped the bowl of punch on her, this for me was a turning point. In that moment, I felt like I could feel Mickie’s emotions and that kind of empathy is so hard to write in scripted television. It really did give me chills, Mickie in tears so convincingly — broken down and battered by Michelle and Layla finally. It’s hard to believe that a scene like this could have been written by the same people who have shafted us for so many years but they were always capable of it. The connection that WWE has created between Mickie and the viewer after the end of that scene is golden. I’d have to think that after that, even the most casual fan would want to see where this goes next and want to see Mickie get her revenge.

This is perhaps the best written scene WWE has pulled out for it’s Divas in years and it’s not just them, kudos to all the women involved for pulling it off so effectively. All five played their parts well and sold the drama to the viewer. Each of them were convincing and so congrats to them.

All of the topics covered here on SmackDown this week have been a greatly welcomed move away from the stupid storylines based around jealousy or looks as has been the status quo for the past few years. From Serena and Punk’s straight edge cult to Mickie standing up for her femininity, the subject matter here is gritty and it’s intriguing. Easily one of the best nights for the Divas in quite some time.