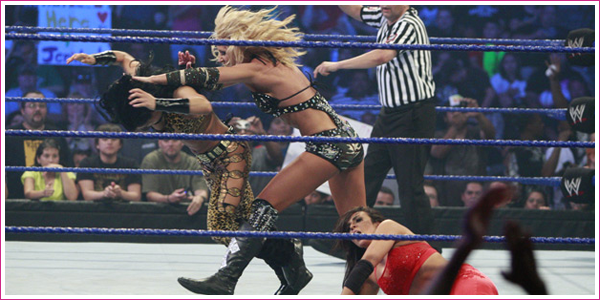 As you can see by now, the SmackDown Redux has been gifted to me by the generous Melanie. As she stated earlier, she’ll be handling the Raw side of things from now on. Hopefully you guys will warm to my style of Reduxin’ just as you did with her. Now with that settled, onto the show!

It seems as though the WWE can’t get enough of tag team matches, because it feels like that’s all we’ve been getting for weeks now. Of course, that’s hyperbole, but it’s clear that they’re using “paint-by-numbers” booking as a means to extend this feud between Michelle McCool and Melina. Melina’s got her third partner in a week, teaming with Eve Torres, who one can only assume gave up her seat on the bench for Maria (Don’t cry for Maria, she had more important things to do, like coming out of closets with Dolph Ziggler. I’m not even joking.). Meanwhile, Michelle teams with her new Alicia, Layla. Let’s see what this slight tweak in the ingredients does this week – watch Melina & Eve take on Michelle & Layla below:

Eve and Layla start off the match. Granted, that sentence probably would’ve scared you a few years ago, but their work wasn’t bad at all. Sure, it feels a little deliberate and calculated, but those two Diva Search alums have come far from strutting for Tom Grisham or whoever the hell hosted that thing. Eve remains in control for much of the beginning, until a sick kick to the head by Michelle takes her out. Michelle must have Inspector Gadget legs, because it’s like she reached Eve from the other corner of the ring. Damn.

Michelle tags herself in and after a failed pin attempt, locks Eve in a leglock. It’s clear that Michelle’s been practicing her submissions, because she’s been busting them out on the regular lately. Her focus on using her legs it a smart move – those babies look powerful – and it practically doubles her move-set. I’m all for it. JR calls the move a “figure-four leglock”, with Eve’s head subbing for her legs, I suppose. It’s a pretty awesome move when you put it in that perspective. Eve struggles a bit but eventually breaks out, flipping over and standing up to do so. It kind of makes Michelle’s move look a bit weak, because for all the sprawling about Eve did on the ground, all she had to do was stand up to get free. I would’ve liked to see them keep the hold a bit in the vertical position – that would’ve elicited a few oos and ahhs from the crowd. It’s all about making the champ look powerful, and making her handy dandy new submissions look easy to break ain’t gonna do it.

Eve takes Michelle down with a modified bulldog and gives the hot tag to Melina, who comes in guns-a-blazing. Layla gets tagged in too, and practices her back-bumping technique, taking some punishment from Melina as she goes on the requisite babyface attack. Melina pauses for a moment to taunt Michelle – a look is all it takes – before returning to Layla. The announcers are quick to sell Michelle’s intimidation, in case the look on her face didn’t do it. It’s a little typical to play the “heel is afraid the the face” card, but whatever. Layla shows a little offense for a about half a second (Catch that irish-whip into the corner? That was it.) before taking a kick to the head and a flying takedown. Melina hits her faceplant, but instead of pinning Layla, she picks her up and carries her to her corner, holding out her hand for Michelle to tag. It makes Layla look extraordinarily weak, but it’s a deviation from your typical passive babyface actions on the part of Melina – maybe shades of her old heel character? I gotta say, kind of miss it.

Michelle doesn’t want to tag, and Layla breaks free (Yay, not as weak as I thought!), only to find herself seconds away from falling prey to the Last Call (Boo, spoke too soon.). Michelle takes this opportunity to interject herself, and that allows Layla to get loose, shoving Melina into a kick from Michelle. Layla lifts Melina into a backbreaker – great display of strength – but Melina gets loose pretty quickly, running straight for Michelle and punching her. I like the focus Melina has on Michelle – it keeps the fire in the feud – but it still kind of makes Layla look like nothing more than an afterthought. Layla tries to catch Melina from behind, but she inadvertently knocks Michelle off the apron. Melina rolls Layla up into a schoolboy pin for the 1, 2, 3.

Seconds after the pin, Michelle takes the moment of distraction to attack Melina. It starts as your typical cowardly heel fare, but once she follows Melina outside the ring to continue the beat-down, it gets interesting. Melina telegraphs a kick, allowing Michelle to run into the barrier. She knocks Michelle over it and into the crowd, and it gets REALLY interesting. Melina drags Michelle back to ringside, pounding on her and grabbing her by the foot when she tries to get away. It’s this type of intensity that adds realness to the feud – you feel as though they truly hate each other – and this kind of pull-apart brawl is something Melina’s perfected over the years. In this instance, Michelle runs away (no pull-apart needed), but it’s still pretty powerful, story-wise. Michelle heads for the hills while the referee has to hold Melina back.

The match itself wasn’t much more than Michelle ducking Melina, but it helped give Layla and Eve a bit of a showcase, if only for a few minutes. Those two girls could benefit from some non-tag team action, that’s for sure. Safe to say, the after-match action was much more interesting. Looking back at it, it’s kind of a cop-out to have Michelle run away, but it’s still much better than the “teasing” we get week-in-week out with Maryse and Mickie. If this feud was fizzling, that little move just reignited it.