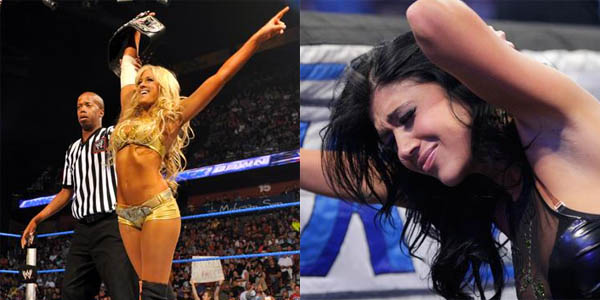 This week on SmackDown, Kelly Kelly brought her shiny new Divas Championship to the blue brand, as she faced Rosa Mendes in a non-title match. Can Kelly build up some more steam going into her very first title defense at Money in the Bank, or will the Freakin’ Costa Rican pull out an upset win over the champ? Check out the match below and find out:

We start off with Rosa in the ring with Alicia Fox, who has seemingly become the leader of this Mean Girls-esque Diva faction on SmackDown. Out next is Kelly Kelly, and the announcers bring our attention to the fact that her elbow is bandaged up. Too bad the Divas don’t get enough time to do things like work an injured body part or anything like that, because a preexisting injury would have been an excellent focal point for the match. But hey, what do I know?

Anyhoo, after some crowd working by Kelly and some trash talking from Rosa, the official signals for the bell and our match is underway.

Right out the gate, Kelly avoids locking up and rolls Rosa up with a victory roll for a one count. Kelly charges after Rosa, but Rosa pulls her into the second rope, neck first and goes for her own pin. Unfortunately for Rosa, Kelly kicks out at two. Frustrated, Rosa lashes out at Kelly with some mounted punches, before slapping on a modified surfboard submission.

After a bit of struggling, Kelly fights out of the submission with a butt bump, followed by an over-the-shoulder throw. Kelly takes advantage by tripping Rosa and smashes her face into the canvas, before giving her a butt slap, adding insult to injury. Rosa tries charging at the champ, but Kelly evades and takes her down with a neckbreaker for a nearfall. Kelly picks up Rosa and whips her into the corner for a stinkface, but when she tries to finish her off with the bulldog, Rosa manages to block it. Seeing her opportunity, Rosa goes for a spinning neckbreaker, but Kelly reverses it into the K2 to pick up the win.

Post-match Alicia Fox and Kelly shoot some dirty looks at each other, as Kelly celebrates her win. I’d like to think that the combination of Kelly’s SmackDown appearance and the looks that her and Alicia were giving each other might mean that the Divas Championship might be defended on both brands again, but that’s most likely not the case.

Very short match this week (as usual), but it served its purpose, just like Kelly’s match against Melina on Raw did: To make Kelly look as strong as possible going into her title defense on Sunday. Both girls looked pretty good in the ring, which is more than what I expected. I would have liked to see more of the AJ/Kaitlyn/Natalya vs Alicia/Rosa/Tamina rivalry, but the champion appearing on SmackDown is hopefully a good sign for the coming weeks.