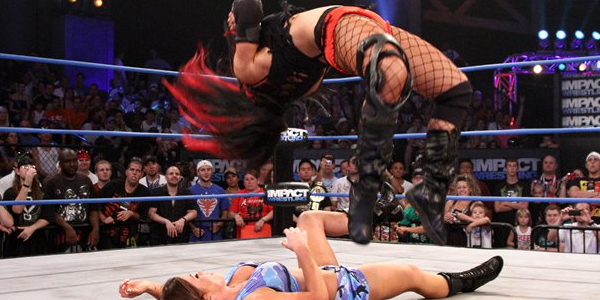 Hola, my little lovies. Nice to see you all again. I do apologize for the extreme lateness of this write-up. I would explain why but I’m not putting my business out there like that. It doesn’t matter anyway. What matters is that this week’s Impact has a match that should have been on a pay-per-view. We should have been given the opportunity to watch these two Knockouts finally come to ahead in a major special event. But, I suppose since this is TNA, we are just going to get a spotlight match. They did it last week and they’re doing it again this week. So if you’re ready for this, it’s been a long time coming. Saddle up!

Before we truly get things started, one thing that this company is definitely good at are the spotlight promos that showcase their matches and feuds. The Knockouts are no strangers to those videos. This time, we get a glimpse into the near past to remind us what brought us here today. Then of course, we pan back to reality where the two women are ready to take it to the mat. Each has their own outlook, one rather obnoxious while the other seems to be going the friendly route, gifts included. Although, knowing this particular femme fatale, she has a trick or two up her elbow brace.

Watch that glorious promo below:

Now it is time for the match and you had better believe it is going to be messy. To the ring first, dressed in cute new ring gear, is Madison Rayne. I believe she’s sporting the US Air Force. Don’t shoot me if I’m wrong. She comes out in her normal fashion, working the sash and crown to her advantage, waving to all her doting community. And Taz just pointed out that it is the Air Force, so go me! Her opponent to the ring next is Tara, dressed in lovely red and black with her hair all did up. I love Tara’s look. I really don’t care what anyone says. If you’ve got it, flaunt it.

Madison, ever so eager for her gift, stretches out her arms for it as Tara gets in the ring but the veteran takes time to pose, much to her distaste. The crowd, however, loves it. Tara picks up the package and Madison looks like a five year old at her birthday party but Mama Tara tells her it has to wait. After the match. This brings on the urge to ring the bell and the referee does so. However, just like old times, Madison tells Tara to come on. Just lay down, count the three and she can win this. I really don’t think so. And neither does Tara because once Madison gets in her face, she knocks the shit out of her. Multiple times Madison gets up and gets taken down by the powerhouse that is her former bodyguard. Love it.

Cue that ever vivacious standing moonsault and Tara is fired up. She decides to forgo the pin attempt and just start slamming Madison’s head into the canvas. “You don’t own me! You are a bitch! I hate you!” I should start writing down these in-ring quotes from the Knockouts so that I can put them in a book. I bet it would sell like hot cakes.

Anyway, Tara stands off of Madison and gets a knee to the face when she tries to go back. This is what happens when you let a wildcat loose. Madison stays on her, screaming that she doesn’t talk to her like that. Then she goes for the RayneDrop but gets a massive clothesline from Tara. She had to check her teeth on that one. Geeze. Add a spinning sideslam to the mix and she is in for one hell of a hangover, no alcohol involved. A grip of the hair and Tara looks to be setting her up for the Widow’s Peak but Madison puts in the reversal, flipping her over to her backside. A run into the ropes and SLAP! goes her foot right against Tara’s chest. Um. Ouch. Thanks for that.

But as painful as it was for Tara, it only boosts Madison’s confidence. She struts back in, slamming Tara’s face against the mat with force, bitching all the way. A rough sling into the corner but the run-in is stopped by Tara’s feet. However, Madison is quick and catches her, tossing her legs through the ropes which leaves her on the apron. Madi goes for a right hand but Tara slaps her down, only to get tripped up and dropped like a bad habit to the outside. Now if that doesn’t bruise the chin, I don’t know what does. To the outside we go and Madison uses the ring for leverage, tossing Tara against the side and finally into the steel steps. Spine first. This leaves Tara down on the floor and Madison is back in, all hyped up about her gift. Oh boy.

Taking her sweet time, she tosses the bow and slowly opens the box, smiling like a court jester as she lifts the object within. Only it isn’t what Madison thought and the minute she sets eyes on the prize, horror sets in. Inside, confined within its gothic cathedral is Poison, Tara’s pet tarantula. Madison literally freaks the hell out. She very slowly puts it down, reaching as far away as possible and starts to back away, screaming like a damn psycho. And then she backs right into Tara, who is ready and waiting. A whirl around, kick to the abdomen and WIDOW’S PEAK! This time she goes for the cover and picks up the win in this match, like a damn boss!

In celebration, she brings out her little friend Poison, telling him how much she’s missed him. Or her. I’m not sure. Madison is slowly crawling her way into the corner and just starts freaking out when Tara starts walking toward her with the spider. She runs all the way around the ring, you know, instead of running out completely. Then tries to get back in the ring but Tara blocks her and chases her ass all the way up the ramp to the back. Arachnophobia. Well, at least it isn’t Acrophobia. I heard that’s really bad.

Thoughts: I am so amused by this week’s show. I didn’t get a chance to watch all of it, because I know there were some clowns involved and well, I’m a fan of the REAL Joker. However, I did watch the Knockouts (of course) and I loved it. Short and sweet but sometimes, it needs to be that way. Tara and Madison are definitely two of my favorites and the match was really good. I love their antics and Madison is a classic heel. Great showing from these two this week and I look forward to seeing if this is the end, or if Tara has more gifts in mind for Madison. I guess we’ll find out next week so until that, my lovies! xoxo