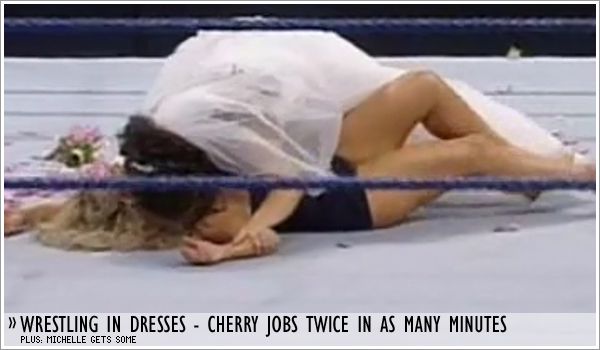 This week on SmackDown: The Divas celebrated Vickie Guerrero‘s wedding by attempting to catch her bouquet. Michelle McCool attacked Natalya, Cherry caught the bouquet and was then beaten by both Natalya and Vickie herself.

Thoughts & Reactions
On paper, I was kinda looking forward to the Divas action on this week’s SmackDown. On screen, I was bitterly disappointed by how things played out. When I read the spoilers that Michelle attacked Natalya during Vickie’s bouquet throwing, I thought this could be a fun way of selling their match this Sunday at the Great American Bash – instead the spot felt uneasy to watch and rather lame. As all the Divas stood together on the outside of the ring, did Michelle not notice that Natalya was standing next to her the entire time until the camera was on her? It looked really stupid when Michelle was happy-go-lucky, waving to the crowd one minute and then the next, she turns and sees Natalya who has evidently been standing next to her through the length of the segment. This just came across as unrealistic and silly, not the way I would have these Divas leave things before their big night at the Bash.

Elsewhere, poor Cherry got to job twice in two minutes – three whole minutes less than the 5 minutes I first predicted in this week’s Diva Dirt Sheet. When I initially read the spoilers, it said something of the lines of “Natalya absolutely killed Cherry”, getting my hopes up for a competetive match in which Natalya really showed some of her great ring presence. Instead, Natalya’s beat down of Cherry consisted of a hair pull and hitting her with a bouquet of flowers before locking in the Sharpshooter. In all, the whole segment lasted less than 3 minutes and that was it – our fill of the Divas for the week. I was lenient on SmackDown last week for it’s shortened use of the Divas, but at least that match and it’s aftermath helped sell the Bash this Sunday. Honestly, I didn’t feel as though this was a segment to write home about and it certainly didn’t help push the first ever Divas Championship match!

Possibly the saving grace of this segment was the other Vicki – Victoria, a welcome return to SmackDown for the Vicious Vixen who displayed her large personality as always. I’m not ashamed to admit that I laughed at Victoria waving her arms around, gotta love this girl! And on another plus note, the Divas did look rather elegant in their gowns though I am not a fan of wrestling in dresses.

Despite being a hellish heel, Vickie Guerrero (as WWE has pointed out on SmackDown) has shown some streaks of brilliance with introducing the Divas Championship and towards the Divas, she’s always been very friendly as “mothersome.” This was a cool aspect to Vickie’s character because the rest of the time she’s a bitch we love to hate, Vickie really makes it seem like she loves and more importantly, respects the Divas on SmackDown and is “friends” with them, even though they may not be friends with each other. I don’t know about you, but I like this quality because it gives SmackDown’s women’s division some importance, some meaning because they can tie it into the GM. Of course, that was somewhat tainted on SmackDown when Vickie virtually pinned Cherry in a matter of seconds, but the interaction beforehand was pretty cool.

Fast forward to the final segment of SmackDown and gosh darnit, what many have speculated would happen, has happened. Edge made his move on wedding planner, Alicia Fox, though I have to say the video footage was really stiff and badly acted. Nonetheless, this gives Alicia some prominence and I cannot wait to see her folded into the mix as it were, in future weeks – hopefully she’ll be joining the women’s division very soon! Let’s not forget, Alicia’s not the only new Diva – I fully expect Maria to make her SmackDown debut next week, I’m glad they have held her off until after the Bash because it puts the spotlight on Michelle vs Natalya.

Alicia Fox: Okay, the acting was stiff between her and Edge but she has the potential to break into the WWE in a storyline many Divas would dream of!

Cherry: Poor Cherry but rather her than a top Diva, well actually, Cherry is the only other face at the moment.

Eve Torres: Nothing to write home about.

Maryse: Nothing to write home about.

Michelle McCool: Michelle’s attack on Natalya looked silly to me!

Natalya: Natalya is becoming the MVP of SmackDown’s women’s division, you don’t need to be a babyface to be the MVP.

Vickie Guerrero: I guess she’s grown into her role, I kinda liked her during the Divas segment.

Fashion Focus
The Good: I thought all the Divas looked good in their dresses, Eve looked gorgeous in hers.