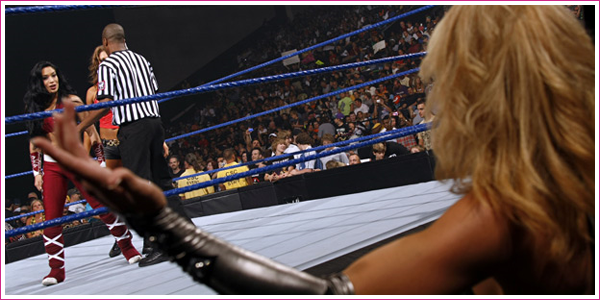 To almost everyone, Melina and Michelle‘s match at Night of Champions exceeded expectations. Realistically, it would be tough to top that, and with the WWE’s tendency to follow up gold with crap, it’s pretty likely that this week’s SmackDown would disappoint. But does it? Are they continuing the Michelle/Melina feud, or are they moving on? Let’s take a look and see for ourselves:

As Melina makes her way to the ring, Michelle hightails it, demonstrating more of that “cowardly heel” shtick that I kind of wish they’d drop. Still, it’s great to see them keep up appearances and showing that things between them are far from over, with Michelle waving her title in Melina’s face like a T-bone to a cartoon pooch. Oh yeah, and Eve and Layla are there too. I couldn’t help but notice during Eve’s entrance that she got a really nice pop. Like, surprisingly good. It could just be canned cheers, but I was pretty impressed.

Layla and Melina start the match, and as they grapple for a moment, it’s clear that Melina has no interest in this opponent. She quickly disposes of Layla and turns for Michelle, who darts away. Layla takes advantage of this distraction to attack her, getting a bit of offense in before Melina takes her drown with an arm drag and tags in Eve. The two do a nice double-team move before Melina runs out of the ring at the referee’s protests (quite a change from her heel days, no?). Eve them performs quite a labored scoop slam (holding for applause?) for a two-count. Eve hits a dropkick, and some awkward exchanges later, Eve ends up on the second rope at the turnbuckle, her back to a standing Layla. Wait, what was she setting up for? Layla seems to be just as perplexed, kicking Eve and sending her to the mat. Layla tags in Michelle, who manhandles Eve a bit, a leg drop earning her a two-count.

Michelle traps Eve in a sleeper hold, turning to smile at Melina as she seethes on the apron. They’re telling a story, and it’s refreshing to see tension being displayed like this. It’s unique, and it helps make the feud feel that much more important. Eve struggles to free herself, sprawling on the mat and eventually getting to her feet, a hotshot to the chin finally loosening Michelle’s grip. Both girls tag out, and not it’s Melina and Layla. Melina takes Layla down with a few clotheslines and a flapjack maneuver. She bounces off the ropes and kicks Layla in the face, landing in a split. Impressive display of flexibility or showboating? You be the judge.

Melina sets Layla up for the Primal Scream when Michelle comes out of NOWHERE, planting a kick to Melina’s chin. With that, the match breaks loose, Eve dropkicking Michelle out the of the ring and Michelle returning the favor with a kick of her own, knocking Eve’s lights out. Layla tags in Michelle, who appears to set Melina up for the Faithbreaker. Melina uses her momentum to reverse the move into the Last Call, flipping them both forward like a pinwheel and planting the back of Michelle’s head on the mat. One, two three! Michelle doesn’t move a muscle, out cold, and Melina looks pretty stunned herself and she and Eve celebrate the win.

The match was as if it was put on fast-forward, with everything accelerated for the take of time (I’m assuming). Still, it wasn’t a poor match by any regard. Layla and Eve seemed a bit uncomfortable at times, but it by no means looked horrible. All the objectives were met, and with the minuscule time given every girl did her part, especially Michelle and Melina, who with a few simple glares extended their feud past its expiration date. The ending was particularly cool, as it came out of nowhere and utilized both Divas’ strengths to combine into a snappy finish. It’s clear that Michelle and Melina bring out the best in each other, so needless to say, I’m happy as a clam that this feud’s still chugging along.