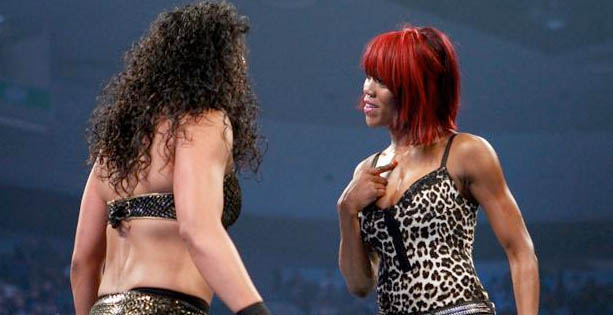 In a land far away, evil tyrant Vince locked out his SmackDown Divas deeming that they would not have “fun, fun, fun” on a Friday. It was a cold, harsh lockout. The Divas wandered aimlessly backstage, their reason for being taken away from them. Some drowned their sorrows in catering. Some tried to dress up as male Superstars to try and get on the show. Some stuck pins in voodoo dolls of the Raw Divas.

But then… The drought eventually ended when AJ, the spunky young newcomer, decided that she had to, in fact, “get down on Friday.”

And so, here we are. The Divas lockout is over! Hurrah!

SmackDown, it seems, is now the tale of womanhood as AJ, a ‘little girl’ (Michael Cole’s words), journeys to become a woman by defeating Tamina: Warrior Princess (Booker T’s words).

It’s AJ, minus her annoying/catchy (delete as applicable) entrance theme, taking on Tamina as the Divas drought ends on SmackDown. As usual, team leaders, Alicia Fox and Natalya are also at ringside.

As the bell rings, AJ and Tamina lock up as AJ tries to go for an armdrag on the much larger Samoan Diva. Tamina, of course, is not budging — Duh! — and uses her strength to hoist AJ off the ground with great ease. The Great Khali Tamina has both of her hands around AJ’s neck and tosses her into the corner. Tamina gets in AJ’s face before the referee pulls her away. AJ looks horrified.

Tamina runs at AJ, but AJ scouts this and kicks Tamina in the face with both feet. AJ with forearms before being pushed into the ropes by Tamina. She uses the momentum to baseball slide through Tamina’s legs. As Tamina turns around, she takes AJ down with a chop.

AJ is whipped into the corner with great force. She slumps into the corner as Tamina hits a running butt-bump, shades of the late Umaga. Tamina grabs AJ by the hair, taunting her. Meanwhile, Michael Cole continues his usual anti-Natalya spiel on commentary. The sky is blue.

Tamina slams AJ back to the canvas and goes for a pin but AJ kicks out.

Tamina with a chinlock on AJ, almost bending her in half. As the crowd tries to cheer on AJ and get her back into the match, Tamina slams AJ face-first back into the canvas. Tamina with a boot to the fallen AJ. She then whips herself off the ropes and goes for a splash but AJ rolls out of the way.

AJ gets back on her feet and hits Tamina with a forearm followed by a spin kick to the midsection. With Tamina down on her knees, AJ runs the rope and hits her patented running knee strike, taking down Tamina. Pin attempt but Tamina shakes AJ off.

AJ with a splash in the corner on Tamina. Tamina whips AJ into the opposite corner and goes for a splash of her own but AJ moves out of the way.

AJ with a roll-up on Tamina for the win.

After the match, team leader Alicia is not happy with Tamina’s loss as the pair come face to face and exchange words. Dissension in the ranks, already? We need Rosa to tie their hands together with her jump rope so they’re forced to make up.

Thoughts: Question: Is Gabrielle supposed to be able to beat Xena? Once again, Tiny Spicy picks up a victory over the much larger Tamina. Sorry Booker T, Warrior Princess she is not.

Decent little match, but unfortunately, after being spoiled with lengthy Superstars matches of late, none of the matches on Raw or SmackDown quite measure up. Timing is everything and these Divas matches are never of a suitable length.

The Tamina/Alicia tension is interesting but I think it’s far too soon in the game to break up these teams they seem to have created. But having said that, at least there’s some sort of storyline here. Perhaps they could build up the Tamina/Alicia situation and do a full-blown storyline. WWE clearly has no long-term plans for the SmackDown Divas with the Divas Championship mostly seen on Raw despite being available to both brands, so they need to do something. I’m not a fan of WWE having a division on SmackDown when there’s nothing to compete for. It makes the matches meaningless, in my opinion. They need something to fight over. Or they need to create storylines like they did back in the days of Torrie Wilson and Dawn Marie which didn’t have a belt involved, but had a continuous storytelling week-to-week. That is something they could do with Alicia and Tamina.