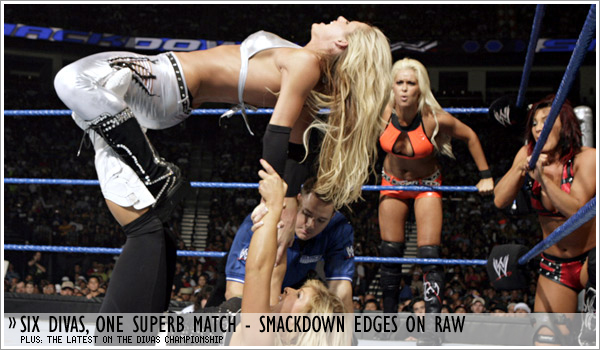 Thoughts & Reactions
This week’s Friday Night SmackDown left me in no doubt that the blue brand is slowly edging in on Raw to co-hold the title as WWE’s top show. And SmackDown’s women’s division possibly had it’s best outing yet last night, in what I think was the single most polished match that the growing division has showcased since it’s inception. I thoroughly enjoyed this match and the work was simply superb, all these Divas worked so cohesively and all the Divas got time to shine. What a fitting match for a night that marked a new era for SmackDown; WWE really went all out during this year’s Draft to establish SmackDown as a top brand to co-headline with Raw. Finally, they have realised that they can’t afford to hold SmackDown down in favour of Raw, finally they realise that both shows need to make bank in order to succeed. Last night, I thought the six Diva tag match was a seminal match for the show and division going forward.

I really don’t have anything bad to say about this match, there wasn’t any obvious botching, all the Divas worked hard and made this a fun, competetive match. On Raw, we’re so used to seeing one Diva be dominant in the ring during tag matches but in this match, all the Divas got ring-time and it really put over all the Divas and that’s a great thing. Natalya and Michelle really went at it and just whet my appetite even more for a singles match, Natalya is so impressive in the ring and I loved her submission hold on Michelle. WWE has really held out on this singles match, I hope they deliver big time when it finally goes down – either have it as a main event of SmackDown or on pay per view.

The other Divas were great too, major props to Kelly Kelly, I was really impressed with her on SmackDown. She showed such confidence in the ring, more than she has ever shown before and really pulled out of the bag, some great moves. In her previous matches with Victoria, the Vicious Vixen had pretty much carried her through the match; however their portion in this match, Kelly was doing a lot more of the work. She really has come a long way! “Cherry Cherry” (haha) and Maryse were fine too, though they didn’t wrestle as much as the others. Victoria, as always, was a consummate professional.

Since JR was drafted to SmackDown, I have been looking forward all week to hearing he and Mick Foley call a Divas match for SmackDown and they didn’t disappoint. I cannot wait for JR to call the eventual moment when the first ever Divas Champion is crowned. That will really make history.

All in all, this was one of the best matches SmackDown has put on in recent months and that’s a bold statement because they really have been on fine form. How will Maria factor into the division when she makes her debut (I’m assuming) next week? It’ll be interesting to see how she fits in, I would love to see a feud with her and Victoria to start out with.

Cherry (Cherry): Cherry didn’t have much to do in this match, though fine for what she did do.

Kelly Kelly: I was truly, truly impressed with Kelly and there’s something I’d never thought I’d say. To see how far she and Layla have come in the recent year, I’m astounded.

Maryse: Maryse was fine for her part of the match, though she and Cherry weren’t as memorable as the other four.

Michelle McCool: Michelle really glued together her team, though Kelly really came through this week. Again, I can’t wait for the eventual Natalya-Michelle match.

Natalya: I just love watching Natalya wrestle, she brings to the ring something that no other Diva can and that’s all the experience and lineage of the Hart family. You can tell she’s a third-generation star because she has that in-ring psychology down pat, something which she must’ve been taught to appreciate by her relatives.

Victoria: It takes one hell of a Diva to lead a match like Natalya, but it takes an even bigger Diva to actually put the match together by putting other people over like Victoria did for Kelly, without her this match wouldn’t have the pace that it did. Victoria is underappreciated because she isn’t always dominating like Natalya or Michelle, but in situations like this you can see that Victoria is actually the one allowing the match to be as good as it is, by taking a lesser role and working with the other Divas to put the match and wrestling over.

The Bad: Cherry, Kelly and Maryse.

The In-Between: Michelle, Natalya and Victoria.

Photos
Below, are digitals of the Divas match from SmackDown Copyright to World Wrestling Entertainment, Inc.