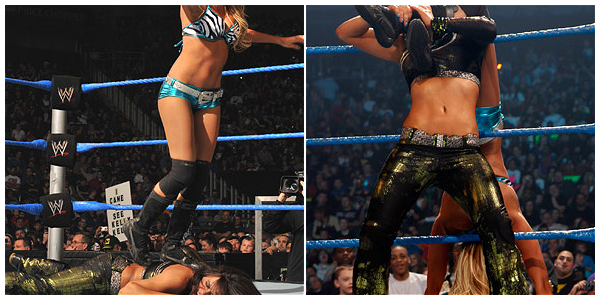 My biggest pet peeve as a wrestling fan is when I read spoilers and the only description the Diva match gets is “it was a typical Diva match.” Well seriously, what in the world does that mean? Is that your polite way of saying the match was crap? An even more polite way of saying that you didn’t even watch it so “a typical Diva match” just sounds good enough to send in? I don’t get wrestling fans. I really don’t. They’re the worst sports fans in the world. They never look outside their specific comfort zone. It’s awful and ridiculous, and before I turn this into a full fledged rant, let me just get back on subject by saying this was NOT a typical Diva match. I don’t know what that means. This match was a chance for Kelly Kelly to showcase how far she’s come and how she’s able to kind of carry matches now. And it was also a chance for Layla, Kelly’s opponent, and Michelle McCool to start building up their characters towards Wrestlemania. The match itself was short and sweet, but the action itself was a lot better than the offerings the past couple of weeks.

Lay-Cool make their way to the ring first. They’re clearly back on the same page and Michelle is back to being a fashion goddess with her amazing grey mini-dress this week. Talk about one flawless looking human being! Layla looks like she always does, in case anyone cares. Unless she’s wearing the wrapping paper ring gear she looks gorgeous. So yes. Anyway, as Lay-Cool make their way to the ring, SmackDown cuts to a commercial break. It returns with Layla in the ring and Michelle sitting at the commentary booth. Josh Matthews and Booker T are hilariously no-selling Michelle, and she doesn’t even care. She takes over the broadcast with Micheal Cole. Brilliant.

Kelly comes out and like always she represents sunshine on a cloudy day. Layla doesn’t look so impressed, and judging from Michelle’s commentary, she’s not impressed either. This should be good. Once Kelly is inside the ring, the former Extreme Expose dance partners begin going at one another. Layla pushes Kelly back, and Kelly retalilates by shoving Layla towards the ropes. She takes her former friend Layla by the hair and starts slamming her head into the turnbuckle, then Kelly adds a few stomps in there. Kelly backs off and when she goes back towards Layla, the ex-champ kicks her back. Kelly is doubled over and gets thrown into the corner, but she rebounds nicely with a stiff looking boot to Layla. Layla goes down and when she’s able to make her way back up, Kelly positions herself on Layla’s shoulders and bends over the top rope. Yes, it’s an illegal choke but Kelly somersaults out of it and onto the floor right before the five count ends. She jerks Layla’s feet from underneath of her and poor Lay faceplants her own self into the mat.

Kelly gets back into the ring and insultingly walks across the back of her fallen opponent. She smirks as she rebounds off the ropes and takes Layla down with a Thesz Press. She throws some nice little punches to Layla’s head and face, and when the two girls get back to their feet, Kelly sends Layla crashing with a clothesline. After a hair-pull takedown, Kelly nails Layla with a facebuster and goes for a cover.

Both girls slowly get back to their feet and Kelly tosses Layla into the corner. She signals for the crowd and launches into her back-handspring/elbow combo, but Layla is game and gets her feet up. Kelly slams the side of her head into the mat. It’s not enough to knock her out because once Layla tries to gain control, Kelly fights back with an elbow to the gut. Layla tries to get into the match once again, but Kelly is just to strong tonight. She kicks Lay and slams her head into the mat several times. That prompts Kelly to try and set up her finisher, but Layla is able to lift Kelly up on her shoulders. Kelly fights back with punches and gets up in the corner. She makes sure Layla is out for the count and she starts to climb up the ropes.

That draws Michelle into the mix. She declares that Kelly is not going to get on those ropes and she jumps to her feet and begins screaming. Kelly turns her attention to Michelle, which gives the savvy Layla the chance to jerk Kelly off the ropes and put her away. Kelly lands with a dull thud and Layla makes the cover, getting the decisive one… two… three. Lay-Cool embrace on the outside of the ring and we cut backstage to a shot of Heath Slater and Justin Gabriel walking around. Snooze.

Personally, I liked this match. Kelly was booked so strong. She basically controlled the match from start to finish and it’s good every now and then to switch things up. Usually the babyfaces always have to pretend to be in peril and it was nice to see the aggressive side of 2K. From a character building stand-point, it seems like Kelly has learned what to expect from Lay-Cool so she came to the ring ready to fight and looking for a win. You always, ALWAYS, have to be on your A-game and it seemed like Kelly recognized that. Lord knows she has enough experience with Lay-Cool to know what they’re about. The distraction ending was typical but I love how subtle it was. Michelle stood up and screamed, which diverted feisty Kelly’s attention just enough for Layla to come up out of nowhere.

This match was short, but it was perfectly put together for both girls.

I look forward to seeing what we get on Raw come Monday!

Highlight of the Night: Kelly walking across Layla’s back which prompted Josh Matthews to talk about how athletic she is. Michelle promptly called him out on it, saying what’s so athletic about walking on someone’s back. Beautiful.