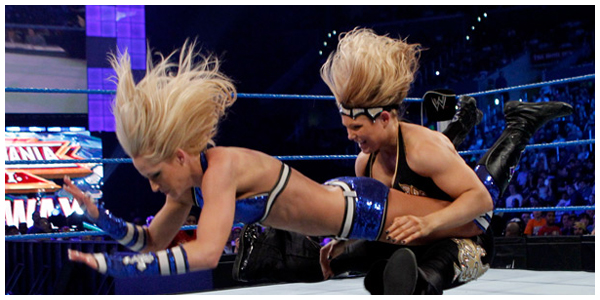 The Glamazon, Beth Phoenix inched ever closer to the coveted Women’s Championship on this week’s Friday Night SmackDown as she delivered an all-mighty Glam Slam on the current champ, Michelle McCool. The Glamazon’s mega momentum was overshadowed, however, by a post-match announcement for next week’s show. Watch below:

We kick off the match with Phoenix and Layla. Layla attempts to fight the powerful Glamazon with some kicks to the legs but Beth picks her up with great ease, hoisting her in the air for an airplane spin and drops her back down to the canvas. This leads to a really funny moment with Layla, who is easily the best comedienne among the Divas, trying to make a tag to her tag team partner [“Ohhhh Michellllllllle”] only to find out that she’s in the wrong corner. As she gathers her surroundings, she walks right into a clothesline from Phoenix who then tags out to Tiffany.

Tiffany hits a really nice crossbody from the middle turnbuckle and goes for a pin but Layla kicks out. She then hits Lay with a rather weak elbow but then hits another one which looks much better. Tiffany then goes for a suplex which to me, looked a little slow and Layla landed awkwardly rather than nice and flat. Another near fall.

Tiffany hits a few forearms, throws Layla into the corner and runs at her but ends up being ‘thrown’ over the top rope by Layla, though honestly it looks more like she just jumped over the top rope. Layla then hits a really beautiful kick which connects to Tiffany’s head. Layla runs at Tiffany but she blocks a forearm and instead hits a hangman on Layla over the top rope. As the referee tends to Lay, on the outside McCool runs and jumps Tiffany from behind. Layla then climbs out of the ring and hits Tiffany’s head against the side of the apron before rolling her back in.

In comes McCool now and Layla throws Tiffany in the champ’s direction and she goes for a clothesline into a spin. McCool grabs Tiffany by the head and begins hitting her with knee strikes before slamming her down to the canvas and smashing her head against it. McCool then goes for a leg drop but Tiffany rolls out of the way and crawls to her corner to tag in Beth, Michelle however grabs her foot but Tiff breaks free and gets the tag.

Beth gets the hot tag with a great crowd reaction and runs right into McCool. She then hits her with an overhead toss and double axe handles. The Glamazon then sets up McCool for a beautiful stalling suplex, then uses the ropes as a slingshot before hitting the suplex. Beth seemingly has the win as she goes for a cover but in comes Layla to break up the count and she again gets hoisted high above Beth’s head in a gorilla press slam position. However, McCool — now up — kicks her.

McCool goes for the Faith Breaker but can’t pick up Beth, instead Beth manages to pick up Beth on her back, hooking her under the arms. McCool then wriggles free and applies a waist lock to Beth. Beth runs at the ropes, ducking between the middle rope as McCool’s throat hits the top rope.

This allows Beth to go for the Glam Slam, with the Women’s Champion screaming ‘no’, the slam is hit to perfection and Beth picks up a win over the champ.

After the match however, before Tiffany and Beth can celebrate out comes Vickie who tells Tiffany to ‘take her cute little skirt’ and hit the bricks. Liking the skirt mockery from Michelle last week and now Vickie.

Vickie comes to the ring and tells Beth she wants an apology. Beth says she apologised to her in her office already, this prompts Vickie to say she wants an apology in front of the crowd. Beth apologises, saying she realises that she shouldn’t have put her hands on an authority figure but Vickie isn’t pleased. Vickie says Beth will regret putting her hands on her and says she’s superior to Beth. She then announces that Beth will face her next week on SmackDown as the segment ends.

All in all, it was another strong week for SmackDown with plenty of ground covered that should pose new questions and storyline progression for next week.

The match was great. with Beth particularly shining, coming into her own as a babyface and something of an anarchist. She comes across as a no nonsense, Stone Cold-like babyface and I think the fans are really responding to that and she got a decent pop when she got the hot tag. Tiffany had a good showing also, as with last week but there’s definitely room for improvement. Seeing her in the ring with Layla was somewhat strange, we’re so used to thinking of Layla as being less experienced in comparison to the likes of Beth and Michelle but then here comes Tiffany, who is less experienced than her. I think Layla has become such a solid, dependable worker who deserves all the success that comes her way. I don’t consider her to be ‘less experienced’ anymore, I see her as being on someone that can be relied upon to have great matches with everyone just as I do the likes of Beth, McCool etc. No one in the Divas division does comedy like her, most are concerned with being ‘sexy’ but she’s not afraid to be fun and goofy and I love it. She’s become such a well rounded worker and character.

Beth picking up a victory over McCool, pinning the champion, is definitely a step in the right direction and can easily be drawn upon should they announce a match between them for the title in the future. Obviously, it looks as though a WrestleMania match which I would have loved to have seen, is off the cards. That’s okay, I tried not to get my hopes too high up and the nature of ‘Mania is so that as many girls can get a payday as possible — quantity over quality. Even then, there was no progression on what happened on Raw on Monday save for a little bit of commentary. Nowhere were the Raw Divas to get their revenge, nowhere was there evidence of Beth maybe backstage on the phone with Eve and/or Gail to hint the obvious six-Diva WrestleMania match. I think we all know now it will be Beth, Eve & Gail vs Layla, Maryse & Michelle but there was no progression on that angle which is a huge waste considering there’s only a week till the show.

I felt the Vickie announcement of Beth versus her for next week overshadowed the fact that Beth had gotten a huge win over the Women’s Champion, which I feel is far more important. Nonetheless, Beth vs Vickie, I’m assuming, is a sort of replacement for what should have been Mickie vs Vickie. If we think about it, Mickie has a whole hell of a lot more to be pissed about with Vickie and I think doing Vickie vs Beth now will stagnate what could be a big match between Mickie and Vickie upon her return. Vickie shouldn’t get in the ring with everyone and it should have been saved for Mickie’s return, after all she was the one who was cost the title at Vickie’s hands.

I’m going to hazard a guess and suggest that Vickie will probably change it to a handicap match next week, with Layla & Michelle teaming with her against Beth, resulting in a beatdown. We may get a save from Eve and Gail if they have Beth come into the mix of that angle on Monday’s Raw and announce the WrestleMania match between Raw and SmackDown next week.