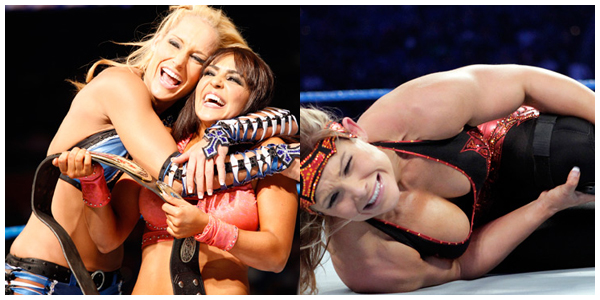 Having followed Layla from the beginning of her WWE career all those years ago during the WWE Diva Search, I always saw a certain something in her — I just felt that this girl was something special. Here at Diva Dirt, we’ve championed her for pretty much all of our existence; from her fashion sense, to her ever-improving in-ring skills and the personality that she easily oozes into her matches and skits. Never however, did I think I’d see the day that she’d hold the same belt that has been held by greats such as Trish, Lita and Victoria — especially not this soon.

It’s been a topsy-turvy week for the SmackDown brand; the Women’s Champion Beth Phoenix injured during last week’s taping and this week, the whole landscape of the brand was turned on its head. Watch below:

The segment opens with Rosa Mendes in the ring for a match with the homecoming queen, the Women’s Champion Beth Phoenix appearing before her hometown crowd in Buffalo, New York. The Glamazon gets an amazing response from the crowd… just wow. I don’t think I’ve heard a response like that for a Diva in years! There is some emphasis put on the fact that Beth was hurt during her match with Rosa last week on WWE Superstars, including a close-up on her Tara-like knee brace. Beth is ready to face Rosa but out comes Vickie Guerrero who reveals two things: A) that she is still the Official Consultant of SmackDown despite being the new Raw General Manager and B) that Beth will have to defend her Women’s Championship right now against Michelle McCool who has invoked her rematch clause — but it will also be a handicap match with Layla also in the match. Err, what was the point in having Rosa on the show in the first place? Surely, Vickie could’ve come out first, made her speech and then Beth could have come out? I guess it’s a case of any excuse to get a pretty face on the show…

Out come Team Lay-Cool who mock Beth’s knee injury as the make their way down the ramp. The match begins and we are told that this will be a tornado rules match with both Layla and Michelle in the ring at the same time. Michelle is the first to go after Beth, going right at Beth’s injured knee with a kick and then clubbing her across the back. Michelle applies a side headlock which Beth soon breaks free of and whips Michelle into the ropes and barges her down to the canvas. Meanwhile from behind, Layla is ready for some action but Beth turns around just in time and Layla walks into a clothesline.

Beth now begins work on Layla but is chop-blocked in the back of the injured knee by McCool. Michelle kicks Beth across the back of the knee but is then shoved down to the mat by Phoenix. Layla then runs into a back elbow. Beth now begins fighting off both Divas with blows but the cunning McCool again goes after the knee taking her down. Lay-Cool begin double teaming Beth, backing her into the corner where Michelle stretches the injured knee out over the middle rope applying pressure to it. Beth then begins to struggle free, hitting Michelle’s head off the turnbuckle but then turns around to deal with Layla. This gives Michelle momentum to climb the ropes, wrap her legs around Beth’s neck and begin choking her. Layla tries to come at Beth but gets a kick in the stomach. Beth then begins to fight free and hoists Layla onto her shoulders and then somehow, miraculously — especially given that she’s injured — piles Michelle on top. What a sight and what a feat from the injured Glamazon. Beth hits a Samoan drop on Lay-Cool before immediately clutching her knee and writhing in pain.

Beth struggles to cover Layla for a pin but she eventually does, however McCool breaks up the count. Michelle begins stomping at the knee before picking up Beth and attempting to whip her into the corner, Beth reverses and Michelle goes into the corner but manages to stop herself by using her leg. She then turns and runs at Beth, the two Divas then end up barging into each other and both end up going down with McCool flying out of the ring.

This leaves the coast clear for Layla to scamper in and pin Beth for the 1, 2, 3 and become the NEW WWE Women’s Champion!

After picking up the win, the new champion begins shrieking at her victory. You know Layla, most girls would cry when they win the belt. Layla’s shrieks of joy as I shall call them, were pretty funny though. Layla celebrates with her Simply Flawless teammates, Vickie and Michelle. Meanwhile in the ring, Beth looks heartbroken as she clutches her knee in the corner having just lost the Women’s Title in her hometown.

Where to begin? Let’s start with the match. Obviously, anytime you have a handicap match, especially with all of the ladies in the ring at the same time, it’s not going to be the most technical match and it’s not going to look that great. This match wasn’t by any means up to the standard that we have become accustomed to for Women’s Championship bouts but it wasn’t the most important thing here. The crowd however, were very into the match due to the hometown girl’s involvement and the stunned silence after Layla won the belt, a disbelief as it were, was just an amazing moment. Shocking your crowd into such a silence is not an easy feat — especially since they were so into the bout and were so vocal for Beth. That really was a DVR moment for me. The crowd were just in disbelief and awe and it just shows what a shocker this was for them to see their hometown girl lose the belt like that. That to me was even more powerful than cheers or boos.

Next, how about a huge round of applause for Beth Phoenix? Wow. The Glamazon just proved her might on SmackDown this week. She’s injured and she still came to work, she hoisted not one, but two women on her shoulders and gave her hometown crowd the best show she physically could. That just shows you the determination, passion and drive that Beth has. What an amazing heart and an admirable performance from her. A fighting champion in the truest sense. The close-up on her face at the end — the heartbroken stare really melted my heart. I truly wish her the speediest of recoveries. Thank you, Beth.

And finally… the new Women’s Champion. There is just so much to be said about Layla that she was entrusted with the Women’s Championship. Even if it is ripped away from her next week, which it could very well be, she can still say she has won that belt. The same championship as the likes of The Fabulous Moolah, Wendi Richter, Trish Stratus, Lita, Victoria, Molly Holly and Mickie James, just to name a few. Those Divas who have come before the current crop that made that title mean something, it suggests to me that WWE realises the talent and depth they have in Layla that she was rewarded with the Women’s Title. She may still be developing as a wrestler and yes, it may have come out of left field — but you’ll get no complaints from me over Layla winning the title.

I say that Layla deserved to have this moment and to have that faith put in her to become the new WWE Women’s Champion. To see her transformation over the last year is a real sight to behold. The evolution of a Diva, a Diva that’s grown before our very eyes in every aspect. She has improved so much in the last year since she was moved to SmackDown in the 2009 WWE Draft. Her feud with Eve Torres upon arriving was pretty shaky but you saw her improve and get better each and every week. Her matches with Melina last summer were really good. Her matches with Mickie James and Beth Phoenix were great too. She has become such a consistent, reliable worker and a great seller; I trust that she can have great matches with whoever she works with. Then there’s her rise as a character — seeing Layla’s personality develop in the last year has completed the package. There are so few Divas on the main roster right now that ooze charisma, charm and personality. Layla is one of those few. The personality and life that she injects into her matches [crying and screaming when she’s about to take the Glam Slam] and into her backstage skits are second to none right now. She is sexy and she is beautiful but she’s not afraid to look goofy or unsexy. She really has become the complete package and while girls like Maryse, Eve Torres and Alicia have been given their moments in the spotlight, Layla has been quietly working in the background to less fanfare to perfect her craft. I wondered when WWE management would sit up and take notice and it looks as though they have. She’s obviously still not a Beth or Michelle-level worker yet, but she’s making great strides and it’s a great thing to reward those that are showing that level of dedication.

WWE is making an effort to push new, younger stars and Layla [although she is 31] is one of those new, younger stars that could really be a big thing for the WWE if given the opportunity. They’ve taken a chance on Eve Torres as the Divas Champ, they’ve taken a chance on Jack Swagger as World Heavyweight Champ and now Layla too. I’m extremely happy for Layla and I think an underdog champion she may be, but her name is up there with all the greats now and no one can take that away from her.