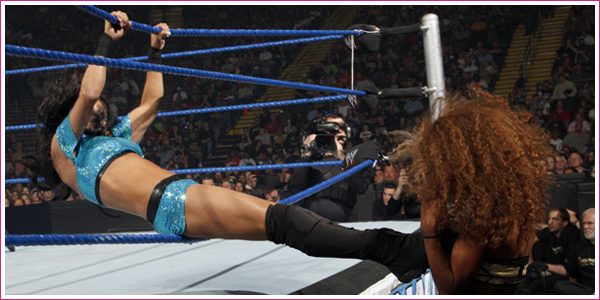 This week, most of our favourite television shows are winding down for the season and it’s usually in the season finales, that show writers go all out. Deaths, weddings, big reveals and plenty of high drama! WTF at Lost? Oh my God at Grey’s Anatomy and so forth… Now if WWE programming ran in seasons, this week’s episode of SmackDown saw the Divas capturing the high drama and excitement that it takes to put on a show-stopping, jaw-dropping finale.

Needless to say, I can’t wait to begin raving about what I thought was an excellent match; when we saw the SmackDown debut of Melina teaming up with Gail Kim to take on Alicia Fox and Michelle McCool. Watch below:

Very rarely do I use the word ‘excellent’ in these Redux posts, but in my humble opinion, I felt the Divas tag team match this week was excellent. Melina’s SmackDown return didn’t disappoint, despite being sidelined for a few weeks she looked absolutely glowing, I have to say. Not that she doesn’t look beautiful usually, but I can’t quite put my finger on it, but I thought she looked ultra-sexy this week. In this match we have three women who I think the SmackDown women’s division will and should be built around; three very different, unique women. All three of these Divas are exceptional in the ring, they all have innovative styles and they all have different looks. We rag on WWE about their ‘cookie cutter blonde’ image, but I think it’s very strong imaging that your top two babyfaces on SmackDown don’t conform to that standard.

This match kicks off straight away, pulling no punches, with what I think is a future pay per view caliber match – Melina vs Michelle. As Todd Grisham points out later on commentary, Melina’s very first match on WWE television was against Michelle on SmackDown in 2005, so it’s great to see just how far these two have come four years later. Starting the match we have what looks to be a very intense scuffle, before Michelle tags out to Alicia ‘Battering Ram’ Fox. Since joining SmackDown, she’s competed in two matches and both of them have seen her get in very little offense on her opponents.

This is a true test for Alicia, can she hang with three of the best female wrestlers on the WWE roster? And the answer is yes. I think Alicia has developed so much, she had some great matches with Natalya and Katie Lea on ECW and while she may not get in much offense, she can work a match believeably and sells very well. Some good work from Melina, who hits a great arm-drag and then we see Gail tag in. Here’s where I think the match really picks up. With the reports last week that WWE is ‘souring’ on Gail, looks like Vince and co. need to take a look at this match because Gail was on-point. I think this is Gail’s breakthrough match with the company during this current run; she was the MVP of this match. We saw more fire and intensity and more innovation, than we’ve ever seen from Gail in the past couple of months. From the hurricanrana, which was sold very nicely by Alicia, to her use of the ropes, she was on fire. Then we have a spot that looked awesome but definitely had me going ‘Ouch’, Michelle pulling Gail off the apron… wow.

Michelle tags back in and we get to see some more work between Gail and Michelle, following their awesome work together in the past few weeks. These two have a good chemistry and as always, worked very well together here, with Gail showing more of her unique style. The way she climbed the ropes into that modified Sliced Bread #2 was fantastic.

An awesome match from start to finish.

Later in the evening, we also saw the continuation of the feud between Eve and Layla. This time Eve gets the upper hand, with a little coercion from Cryme Tyme. Hopefully they’ll go at it in the ring next week and eventually be integrated into the rest of the women’s division, maybe Gail, Melina & Eve vs Michelle, Alicia and Layla? Watch below: