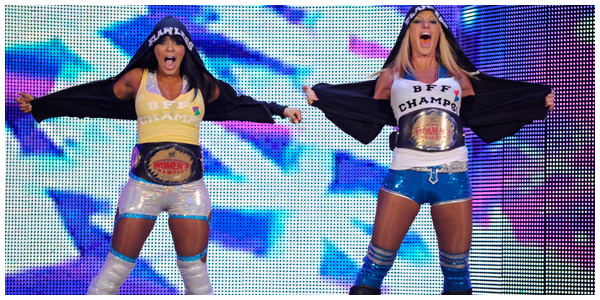 After getting our first glimpse of the new set-up with the Women’s Championship on Raw this past Monday, we got a full explanation on this week’s SmackDown. Team Lay-Cool have decided to share the Women’s Title despite Layla being the one to pick up the victory during last week’s match-up. Ring announcer Tony Chimel was quick to point out that Layla and Michelle McCool are the ‘self professed’ co-Women’s Champions — which, for the record books, means that only Layla is ‘legally’ recognised as Women’s Champ. Watch below:

Confusing as it may be, it’s a pretty cool gimmick to have Lay-Cool acting as though they are co-Women’s Champions. It’s not been done before with either the Women’s or Divas belts, so it’s somewhat refreshing and creative. This sets up lots of possibilities i.e. handicap matches against the likes of Kelly Kelly or Tiffany if they were to receive title shots; or perhaps us never not knowing which Diva may defend the belt and also, perhaps even a Lay-Cool sized implosion. But for the here and now, I guess they’re establishing this new gimmick and we can’t expect any storyline progression just yet.

This week, Lay-Cool once again faced off against Kelly Kelly and Tiffany. Layla and Kelly kick things off with a lock-up which turns into a side headlock by Layla. Kelly whips Layla against the ropes but she manages to counter with a quick counter pin which looked very impressive. Layla begins wrenching Kelly’s arm but K2 fights back with a forearm and then hits a springboard armdrag using the ropes. Kelly kicks Layla and whips her into the corner, Layla manages to stop herself and uses the turnbuckle to jump over Kelly and wrap her legs around Kelly’s head. However, Kelly then tosses her over the top rope, hitting her with a few forearms and then kicks her off the apron. Kelly now on the outside of the ropes is met by McCool who she also kicks off the apron.

Kelly now takes to the middle rope and hits a crossbody to the outside on Michelle with Layla seemingly getting away. Kelly chases her to the other side of the ring where she’s met by Tiffany who hits a clothesline off the apron on the Women’s Champion. Great spots.

Tiffany is now tagged in and jumps from top rope to hit a sunset flip on Layla. She then hits Layla with a low dropkick which doesn’t look very good at all and Layla simply lands on her butt. Layla now back up, walks into a back elbow and is whipped into the corner and hit with a monkey flip. Tiffany goes to lift Layla but she fights back with a knee to the midsection and tags out to Michelle. As she gets in the ring though, Tiffany grabs her by the hair and tosses her across the ring before knocking Layla off the apron.

Tiffany now goes for a monkey flip on Michelle but she manages to counter into a Faith Breaker and take the win for Lay-Cool.

Short, simple but a fun little match that managed to pack some good spots into 2-3 minutes. Obviously, there’s no real storyline progression here and I’m assuming any plans they had were thrown out of the window when Beth was injured. But for this week, their goal was to explain to the audience how this whole co-champions thing came about and establishing Lay-Cool as co-Women’s Champions and I think they did a good job in that. Hopefully now we’ll see more development.