SmackDown Redux (May 7th, 2010): Lady Luck Shines on Layla and Her Name’s Michelle 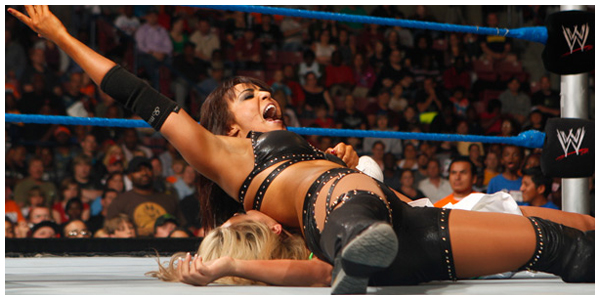 This week on SmackDown, Layla scored yet another very rare victory and like her win over a departing Mickie James two weeks ago, she can thank former Women’s Champion, Michelle McCool for the assistance. Watch this week’s SmackDown match below:

Out first are Kelly Kelly and the Diva who shall now be known as Tiffany Tiffany. The two blondes come out to the ring looking like Gym Barbie and Wrestler Barbie respectively. On the apron, Tiffany shows off her new and exciting~ entrance pose, holding her foot while pointing at the crowd — whatever works for you, Tiffany! Out next are Team Lay-Cool with Vickie Guerrero in tow. Does anyone else find Team Lay-Cool’s entrance on the ramp exhausting? So many turns…

Tiffany kicks off the match with Michelle and I’m excited because I think these two Divas have good chemistry. They lock up rather roughly before Tiffany backs Michelle into the corner and the referee breaks things up. Michelle then face-shoves Tiffany however the former ECW GM counters with a drop toe-hold, followed by an atomic drop. Tiffany then hits McCool with a back elbow before winding her arm and whipping her into the corner. Tiff goes for a monkey flip but Michelle, in a really amazing display of athleticism, lands on her feet and rightfully boasts screaming, ‘Flawless’. Meanwhile from behind, Tiffany has Michelle scouted and hits another monkey flip and this time, McCool lands on her tailbone and flees the ring.

On the outside, Layla and Vickie create a blockade of sorts, not allowing Tiffany to get to Michelle. Meanwhile, McCool gets back in the ring and as Tiffany tries to get up on the apron, she is hit with a low dropkick, sending her crashing to the floor outside. It seems like Tiffany is always taking a bump to the outside and I really admire just how game she is, she’s unafraid of getting physical and getting cosy with the concrete as it were.

McCool rolls Tiffany back into the ring and begins viciously striking her with her knee. Michelle then tags out to Layla who slams Tiffany against the canvas and whips herself off the ropes for a big splash but Tiffany puts her legs up, taking the wind out of Layla.

Tiffany crawls to her corner and tags out to a fresh Kelly Kelly. Layla runs to her corner but Kelly shoulder blocks her through the ropes and then somersaults into the ring over Layla’s back. K2 then hits Layla with a clothesline and two rather awful low drop kicks. Kelly kicks Layla into the corner and riles up the crowd for her handspring elbow — but not before trying to knock McCool off the apron in an un-Kelly like show of aggression. Kelly goes for the handspring elbow but Layla nails her across the back with her knees. Hey, anyone remember that old Kelly/Layla/handspring fail on ECW? How they’ve grown~

Layla now goes for a clothesline but Kelly reverses into a neckbreaker before tagging out to Tiffany who hits a crossbody from the middle ropes. Tiffany goes for the cover but in comes McCool, interfering and breaking up the count. The referee then tries to get Michelle out of the ring followed by Kelly. But while he is distracted with Kelly, McCool kicks Tiffany across the back, allowing Layla to hit her Layout for the 1, 2, 3.

This was a pretty good match that played nicely off last night’s backstage segment on Superstars. I really do like seeing Tiffany in the ring, it’d be great to see her have a longer singles match one of these days. She has great chemistry with Michelle and I see her as someone, minus the awful ring attire, that could conceivably challenge Michelle McCool in a feud in future. For some reason, I just can’t take Kelly seriously as a title contender and I just can’t quite picture her feuding or having great matches with McCool. Just looking at Tiffany, she looks like a Glamazon in the making. She’s a little more built than Kelly, she has some height — she really does remind me of Beth Phoenix. She has a great figure and looks intimidating in the ring.

Again, it’s nice to see Layla get a win because it doesn’t happen often but she still looks weak as McCool is always there to ensure the win. I’d really love to see Layla be given the opportunity to win a match of her own accord one of these days.