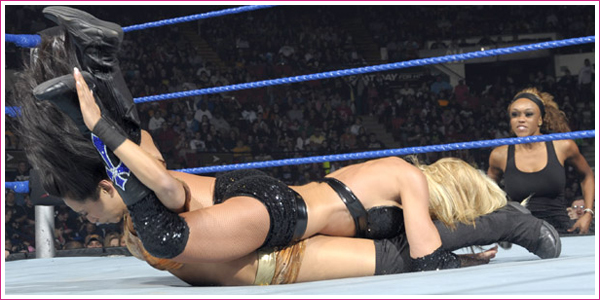 This week’s SmackDown sees a double dose of Diva action, as Gail Kim and Michelle McCool do battle in the ring while Layla and Eve battle in an arm wrestling challenge.

Let’s look at Gail vs Michelle first, watch below:

A few weeks ago when it was suggested that SmackDown got the upper hand in the WWE Draft, many of us nodded our heads in agreement. Three weeks later, that fact is a bold understatement. As with the rest of the SmackDown brand, the show’s writers have utilised their talent – Divas included – and maximised their potential and in my humble estimation, made SmackDown a must-watch show every week. The Divas of Friday nights, this week in particular, are shining in the wake of the Draft and we haven’t even seen the debut of the Women’s Champion, Melina yet. To say the best is yet to come would again, be an understatement. But if the best is still yet to come, I gotta say, I’m loving the hors d’ourves we’re sampling right now.

Allow me to sidetrack a bit, but in my estimation, the entire SmackDown show since the Draft has been on-point with stars such as Jericho, Edge, Punk, Morrison and so forth. And the Divas so far, have been in line with that. With the top-tier stars moved to beef up Raw, SmackDown has more time to allocate to our Divas and in the process, I think, is creating future stars – Divas included. Following from their great match a few weeks ago, I think Gail and Michelle have outdone themselves this week. Top to bottom, I felt their work on this week’s SmackDown was great and certainly in line with the rest of what is becoming, a great product.

My only nitpick in this match would be Michelle’s insistence on rehashing that old ‘pushup-into-bow’ trick she first tried to use when she turned heel. Honey, it looked stupid then and it looks stupid now. Other than that, we got some good technicality and aggressiveness. Michelle really took it to Gail, who countered with her fast style of assault.

We’re still unsure of the relationship between Alicia Fox (or A-Fox as JR calls her) and Michelle, but me likey the utilisation of Alicia in this match. The way Michelle used her as a shield was a whole lot more than Beth’s done with Rosa in what, the past five months?

Michelle really took the lead on the offense in this match, rather than relying on the more experienced Gail, which I felt was a great touch. Michelle definitely has got the skills and doesn’t need to rely on Gail and shouldn’t. The guilotine on the top rope looked very effective and with Michelle’s height advantage over Gail (and most of the other Divas) is the type of offense she should be pulling off along with her now patented big boot. Michelle then continues to use those long legs of hers to wrap around Gail’s head in a unique submission move.

Then just as Gail manages to regain herself and come back in the match, we see Alicia get involved again, putting Michelle’s foot on the rope. Thus leading to the finish, which was excellent if you ask me. Gail’s hurricanrana countered effectively into the Faith Breaker and for the first time ever, I think, Michelle hits the move with great poise and presentation.

Next up we have a followup to last week’s Brooklyn Break-Down. Check it out:

After Eve and Layla become the first Divas to successfully pull off a WWE dance-off, this week they try and work their magic on the old arm wrestling contest. Once again Layla looks absolutely gorgeous, making most women feel inadaquete, I would think. Eve’s not too bad herself but JR dug himself a big ole hole, bringing up Eve’s size. Sure she is a little more chunkier than the other Divas, but that doesn’t make her ‘fat’ nor does it mean she’s unhealthy, she’s beautiful.

Playing into her heel nature, Layla fakes injury… go figure, but pulls it off pretty good. But she eventually loses anyway. Then we see even more of that aggression we saw from Layla last week, this time going for some sort of neckbreaker on Eve. I wonder if that move is the ‘Layout’ finisher that Layla talked about creating in Flex magazine earlier this year? If so, it looked pretty cool on Eve. Layla has the look, the charisma and personality it takes to be a Diva, I just hope she can measure up in the ring because I really want to see her wrestle more.

All in all, it seems the Draft has been very kind to SmackDown and we have a well balanced Divas roster. Five Divas were utilised in roles that contributed to the product and allowed them to be used in a meaningful way, whereas on Raw, the writers can’t seem to book any Diva consistently. Gail and Michelle have been set up as the top tier Divas and had a great match, with Alicia Fox serving a lesser role – well I wouldn’t call it ‘lesser’. I’d say Alicia is ‘bubbling’, as in she’s on the verge of breaking the bigtime. It’s a great spot for her to be in, but I won’t lie, I would have preferred Layla to take that #2 heel spot. Meanwhile, Eve is brought back into the fold of the Divas division and is teamed with Layla, making a sort of ‘lower card’ sub-division for the Divas on SmackDown. And then we have Maria, who has rightfully been removed from the mix altogether and is now something of a backstage personality. I think they should consider finding other uses for Maria, perhaps as a backstage interviewer or move her into the broadcasting side of things (i.e. hosting a WWE recap show) because I don’t really see her moving forward in the Divas division. The fact that WWE has put Eve in a storyline over her, kinda suggests that the writers also aren’t really looking to put her in the Divas mix either.