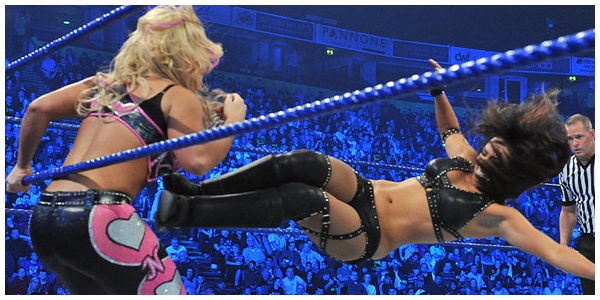 With Survivor Series just on the horizon, and a 2-on-1 Handicap Match for the Diva’s Championship looming, the Lay-Cool/Natalya saga once again continues on Smackdown. Layla rides solo this week as she takes on Natalya in a rematch of sorts from Bragging Rights. Can the two Divas recapture the magic they created at last month’s pay-per-view? Lets take a look…

A smiling Natalya makes her way to the ring first and she gets quite the warm reception. She looks gorgeous, like usual, and once she climbs into the ring and gets set, Lay-Cool’s theme song begins to play. Layla is riding solo tonight and she walks out in her all black attire. Despite the fact she’s British, her welcome is less than friendly. She doesn’t seem to mind, to be honest. Michael Cole explains Michelle’s absence by letting us know that Michelle is basically disgusted by all things British, among some other comments.

The match begins with Natalya locking her arms around Layla’s waist, sliding down, and dropping Layla face first into the mat. Natalya follows it up by rolling over her opponent and attempting a headlock, but the savvy Layla reverses it into a wristlock. Both girls make their way up to their feet and Natalya manages to wrench Layla’s arm around, get her in a good position, and scoop her up for a powerslam. While she holds Layla in the air, Natalya bends slightly at the knee and treats us to a few squats before planting the self-professed co-Diva’s Champion into the canvas. Natalya went for the cover but Layla powers out after the two.

Natalya pulls Layla to her feet by the hair and nails her in the face with a forearm. She tosses Layla into the corner and charges. Layla attempts to jump over the on-coming Natalya, but Nattie catches the first ever British-born Women’s Champion. Layla wiggles until she’s able to slide out of the hold and she shoves Natalya into the ropes. Nattie bounces off and Layla connects with a kick that sends Natalya onto the outside of the ring. Layla stomps away on Nattie’s face for a bit until the referee pulls her off and sends her back. Layla screams at him and goes back to Natalya, but the Canadian Diva is able to drive her shoulder in Layla’s mid-section. Layla stumbles back but has enough presence of mind to throw up a kick. It connects with Natalya’s forehead and Layla drags her opponent to the center of the ring and goes for a pin.

Layla gets to her feet and lumbers towards Natalya. She grabs her by the hair and slams her face into the mat. With Nattie grounded, and seemingly out of it, Layla uses the chance she’s created for herself to lock her legs around Nattie’s neck and try to finish her off. This goes on for several seconds until Natalya starts to fight through it. Natalya eventually makes her way back to her feet, with Layla wrapped around her body, and she backs them up to the corner. Despite the blow, Layla manages to hang on so Natalya twists her around and lays her out across her knee, ribs first. Layla is in pain but when Nattie goes for a follow-up, Layla is able to connect with her foot to Natalya’s forehead. Layla picks herself up and hits a clothesline, and now it’s Natalya’s turn to wither on the mat in pain.

Layla taunts her rival and goes for a leg drop, but Nattie is able to move. She heads for the corner and Layla attempts a splash, but once again she comes up short. Layla’s face bounces off the turnbuckle and Nattie takes over. She hits her spinning clothesline and then a double underhook suplex, which leaves Layla in a world of pain. Nattie goes for a cover but Layla gets her shoulder up at the last possible minute. Layla also has some fight left in her because she manages to drop Natalya down onto the turnbuckles. Nattie grips her jaw in pain while Layla sets up for a huge kick to the skull. Nattie grabs Layla’s leg and immediately the “Lay” of “Lay-Cool” begins to scream. Nattie doesn’t even tease it this time. She drops Lay like a bad habit and throws her into the Sharpshooter. Layla wastes no time in tapping out and Natalya is one step closer to becoming the new Diva’s Champion.

To bad her match at Survivor Series is going to be a handicap match.

Random Observations: LOVE IT! Wow. Natalya just brings the best out of Layla every single time it seems. I don’t exactly think this match was as amazing as Bragging Rights but it came pretty darn close. It was pretty even in terms of offense and defense. I loved the opening sequence. It just goes to show how comfortable Layla and Nattie are with each other.

SmackDown this week made up for the debacle that it was last week. As much of a fan as I am of Kaitlyn/Dolph/Vickie, I will take Lay-Cool/Natalya over them any day. I wonder if we’ll get anything on Raw between them???