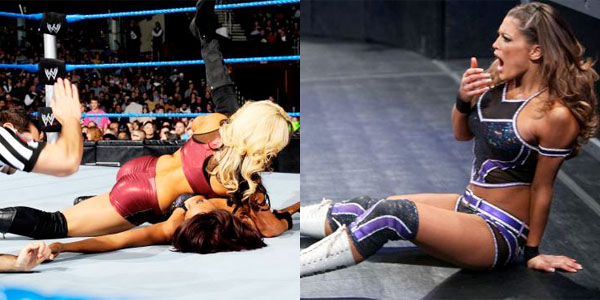 Alright, everybody! Welcome to this week’s SmackDown Redux. Steven has been booked as a D-Lo Brown lookalike again for a bar mitzvah (also available for Attitude Era themed weddings and christenings), so I’ll be stepping in his shoes this week – let’s hope they fit okay!

This week’s blue-roped bonanza for us all to enjoy was a super six Diva tag team match pitting Aksana, Alicia Fox and Divas Champion Eve Torres against Layla, Natalya and the #1 Contender for the Divas Title, Kaitlyn. This show will serve as the final stepping stone before Survivor Series so who will come out on top? Will Eve be looking good to me or will Kaitlyn be celebrating by spinning a couple of bottles? Let’s have a look!

It appears that entrances aren’t necessary as all six girls are immediately in or around the ring as the bell sounds. Before the action ensues, our decadent Divas Champion waves to her loyal subjects whilst Alicia growls at the crowd and the face team all mock the current champ just like how they did in the WWE.com exclusive segment from earlier that day.

Our resident Dungeon Diva and Lithuanian Lovely start things off with a feisty grapple before the break is forced at Nattie rebounds into the ropes. Antonio Cesaro’s former lady friend then delivers a knee to the stomach, followed by a wristlock, which Nat reverses it in the oh-so awesome way that we’ve come to love. The last graduate from the legendary Hart Dungeon then goes for a quick schoolgirl before tagging in Layla.

Our Little English Muffin rocks Aksana with a cheeky spank which is followed by a double clothesline from her and Natalya. Ms El then hits a dropkick and a butt bump to get a two count. The former Diva Search Winner then whips Aksana off the ropes, who is blindly tagged by A. Fox. The woman who only managed to best Maxine and Jamie Keyes in NXT Season 3 then nails a knee to Layla’s temple before thrusting her head to the mat courtesy of some help from the most fierce WWE Diva.

The Hungry Pirahna goes for a pin attempt before utilizing a picture perfect northern lights suplex. The former wedding planner only gets a two so goes right back on the attack with a hair-grab takeover. Fox then tags in the Champion who introduces her back into Layla’s stomach in the form of a flipping senton. The three-time Divas Champion continues her assault by pushing Layla’s throat into the ropes before going for a cover. After a near fall, the final Diva Search winner delivers a snapmare/kick to the face combo that still can only manage at 2 count.

Foxy then comes back into the ring and jolts one half of the former LayCool with a thrust kick to the midsection. Layla tried to fit out of her predicament and crawls to her corner to make a tag, but Alicia has nabbed her prey once again. The last ever Women’s Champion uses her last ounce of strength and kicks Alicia right in the kneecaps allowing her to make the tag to Kaitlyn.

The Hybrid Diva hits a clothesline, then an elbow before finishing her sequence with a spinning elbow. Alicia tries to make a comeback with a sharp kick to the head, but the NXT Season 3 winner shrugs it off and hits a flapjack. A shoulder tackle and a near fall later and all hell is breaking loose! Aksana and Natalya tussle to the outside whilst Eve tries to distract Kaitlyn on the apron. Kaitlyn reverse Alicia’s offense and whips Foxy towards the champion but the Bipolar Beauty manages to stop herself from hitting Eve. Unfortunately for the heels, Kaitlyn is having none of that and dropkicks Alicia, sending her flying into Eve. A reverse DDT later and Kaitlyn has picked up the win for her team!

My Thoughts: Well, wasn’t this a nifty little tag match? Whilst I don’t have enough fingers to count out how many Diva tags there are better than this one, this one served its purpose perfectly and I liked it. Although nothing really stood out to me as epic, all the girls involved are meshing together better. Aksana’s potential weaknesses were covered thanks to her working with Natalya and Kaitlyn continues to show her potential. However, whether that potential can translate to championship pink and silver remains to be seen!