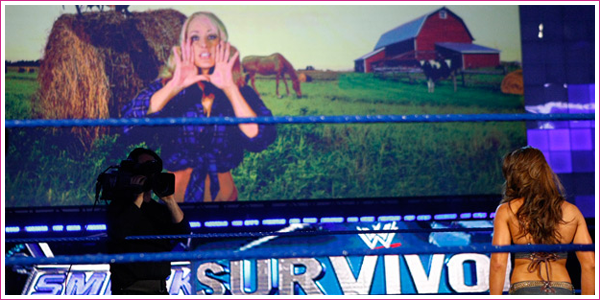 This week’s edition of SmackDown moves away from the juvenile high school pranks of last week and if it’s even possible, regresses to kindergarten, sandbox-esque bullshit. I don’t enjoy seeing any Diva berated and being called ‘Piggy James’, whether it’s ‘acting’ or not. We all know that unlike real scripted television shows, there’s a fine line between reality and constructed television when it comes to WWE.

But before we get into dissecting that, prior to the skit we saw a Divas match between Mickie James and Layla:

For the second time in the past month, we get Mickie vs Layla and already, I get the sense we’re going to be seeing this match at least a couple more times as with the Melina-Layla series. Layla, who this week was sporting a questionable new outfit, has shown much progression in the ring in recent months. Her work with Melina was superb and while I didn’t necessarily feel the chemistry in her match with Mickie a few weeks back, it was an okay match. Mickie is a Diva that either has chemistry with someone or she doesn’t, it doesn’t seem as though she can adapt to that person. I would say she works better with Layla than she does with some ring veterans but it still doesn’t measure up to Layla’s earlier matches with Melina.

Anyway, we kick off with the Layla pointing a finger in Mickie’s direction but the former Women’s Champion fights back with forearms and throws Layla into the ropes for a Thesz Press. In the corner, Mickie begins stomping at Layla seeking retribution for the clothes-cutting incident last week but the referee tries to back her off. Layla kicks Mickie straight in the knee which takes her off her feet. Layla then clubs at Mickie’s head and hits a rather nice low dropkick on her. Mickie begins to fight back, jumps over Layla in the corner and rolls up her up with a bridge for a quick win.

Hardly a competitive match, far too short to be anything substantial. Layla, as always, shows some ring prowess and an aggression that helps her mask the fact that she’s still a rookie in the ring. Being confident and assertive in the ring can go a long way to cover your flaws. Honestly, not much to say about this match beyond that.

Layla gets on the microphone and diverts Mickie’s attention to the screen where Women’s Champion, Michelle McCool sings “Old MacDonald,” calling Mickie ‘Piggy James’. As I wrote earlier, this was incredibly tasteless and if you think about it in terms of storyline, it’s hardly an exciting route to go. Fat jokes, clothes cutting… it’s all very ‘Mean Girls’ and not what you’d expect from grown women. Hardly realistic. You’d think that Michelle McCool, who is often billed as being a former school teacher and a graduate, would be a little more advanced in her taunting of Mickie. This just comes across as WWE stereotyping woman-on-woman hate as having to be about weight etc. and it’s ridiculous. If children are your target audience, then congratulations — but this was just stupid to everyone above the age of 10.

No doubt this segment will be yet another illogical reason to hate Michelle for some, but rather than waste my time explaining that it’s scripted, I’ll just say how sorry I feel for those of you.

With the Survivor Series on Sunday, what exactly does it say about Mickie James as a team captain given the fact she’s been reduced to tears by McCool two weeks in a row now? It seems to suggest to me that the wrestling is unnecessary despite being a wrestling show — why beat the girl up when you can just cut her clothes and reduce her to tears? Flawed logic.

I don’t quite see how this pushes the agenda for the Divas match on Sunday, it seems to be more of a self-contained build for next week’s SmackDown rather than a build towards the pay per view. A waste of a show if you ask me.