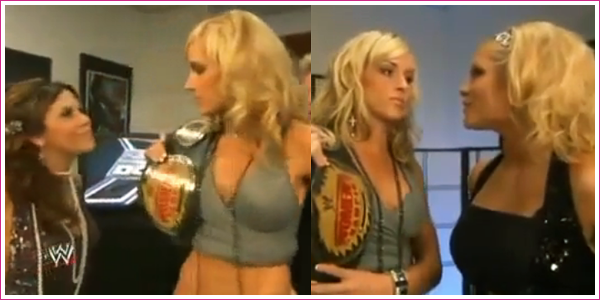 Last time on SmackDown: Michelle and Eve did battle, with the Women’s Champion coming out on top. Meanwhile, Maria’s untimely chair stealing cost Dolph a match and the both of them their relationship.

This week: To say that Monday’s “Diva Draft” put a different spin on things would be an understatement. How will SmackDown two newest Divas–Beth and Mickie–fare on their new show?

I usually won’t do a Redux unless there is a match, but this backstage segment was interesting enough to cover on its own. For one, it features Mickie James and Beth Phoenix‘s SmackDown debuts, but it also features Chris Jericho interacting with Michelle McCool and hinting towards a possible match at Bragging Rights:

Backstage, Team Smackdown co-captain Chris Jericho is talking to Michelle, expressing to her how important Bragging Rights is for their brand. Teddy Long stands nearby, listening in. Jericho says that there will be 3 SmackDown vs. Raw matches, and he has faith in himself to lead his team to victory, but has no faith in John Morrison to defeat the Miz in his match. He asks Michelle if she is capable of getting SmackDown that crucial 2nd win. Michelle tells him that he can count on her, and she realizes that he is the best at what he does, but what she does is make history. She can beat any Diva on any show at any given time.

Mickie pops in and wants to tell Teddy how excited she is that he chose to draft her to SmackDown. She tells Chris that if he wants a Diva who can win at Bragging Rights, maybe he should choose someone who has already beaten every Diva on Raw. Michelle isn’t pleased with Mickie deflating her ego balloon, so she departs.

But, before the can exit the room, she runs into Beth Phoenix–literally. Beth eyes Michelle’s Women’s Title and tells her that she shouldn’t plan on holding that it very long. Showing a wee bit of intimidation, Michelle leaves.

Now, this whole scene was pretty much just a sloppy way for Mickie and Beth to make their debuts, but I liked that they both got to interact with Michelle. It wasn’t much, but I liked their interaction with Chris Jericho. I’d love to see an inter gender storyline that wasn’t based on melodramatic relationships, but that’s another matter.. I’d say they’re definitely planting the seeds for an upcoming feud, but what will it be? Heel (Michelle) vs. Face (Mickie) or Heel (Michelle) vs. Heel (Beth)? Who will wrestle at Bragging Rights? I suppose we’ll get a hint at both of those questions next week. And hey, maybe we’ll get an actual match too..

What do you guys think? Will Mickie get the first shot at Michelle’s title, or will they go for a more unique heel vs. heel feud? Perhaps a triple threat? Sound off in the comments!