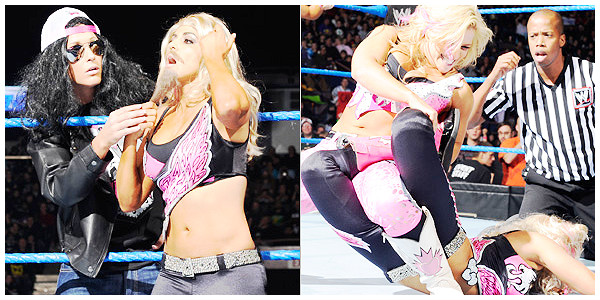 The road to Bragging Rights heats up for the Diva’s tonight as Michelle McCool and Layla take on their opponent for Sunday, Natalya, with her partner, Kelly Kelly, in a tag team match. Since the anti-climatic conclusion of Hell In A Cell earlier this month, the rivalry between Nattie and delicious co-Unified Divas Champions has been picking up steam. For the past few weeks, we’ve watched Nattie come ever so close to locking Layla in the Sharpshooter, only to have Michelle jump in at the last moment and save her BFF. Will the same thing happen tonight? Dun dun duuuuuuuun!

When SmackDown returns from commercial break, Lay-Cool are already in the ring. Despite the fact Halloween is only a week away, Lay-Cool have decided to wrestle in costume tonight. Michelle has donned some nice yet ill-fitting jeans, a Hart T-shirt, and leather jacket. She’s dressed as Bret Hart complete with dark hair and baseball cap. Layla has morphed into a pink and blond haired Natalya. She’s wearing the third-generation Diva’s ring gear and to cap it all off, Layla has added a Jim “The Anvil” Neidhart goatee to the mix.

Random Thoughts: At this point, all I can say is wow. These costumes are pretty hilarious and Lay-Cool are probably the only Divas who would pull off something so evil. I would love to see someone dress up and imitate them one week. Now that would be amazing.

Layla grabs the microphone before Tony Chimmel can introduce the match. She says that she wants to introduce WWE legend and her uncle, Bret “The Hitman” Hart. Then she screams in a man voice “YEAH BABY” and strokes her goatee. Good God. Michelle steps up and even does the Bret Hart gesture. Not sure what to even call it, but she does it. No words. Michelle, in a very uninspired and very monotone voice, says that since we probably have no clue who she (Natalya) even is she wants to introduce us to the third generation Diva and Hart family disgrace, Natalya “The Anvil” Neidhart.

Random Thoughts: Say what you will about Lay-Cool, but this is pretty epic. Michelle’s horrible Bret imitation has me cracking up. I love this duo so much. They’re so brilliantly annoying that the pay off of them getting their asses beat is well worth the wait and shenanigans.

Layla takes the microphone and turns to Michelle, and in character, she asks Michelle, “Uncle Bret they like worship us here, eh?” Michelle shakes her head. “Not you kid. They worship me.” Michelle then says that she worships Lay-Cool because they’re flawless. She even gives a little fist pump.

The Hart Dynasty music hits and the real Natalya makes her way to the ring with Kelly Kelly. As always, Natalya is looking great and Kelly looks nice as well. The smiling faces make their way to the ring as the commentators reveal that it will be Layla defending the championship this Sunday at Bragging Rights. A graphic for the match is shown and once that’s all said and done, Natalya and Layla start the match.

Natalya locks her arms around Layla’s waist, but the Diva Search winner is able to fight out of the hold with a few elbows to the face and a nice looking backwards kick to Natalya’s stomach. Layla forces Natalya into the ropes, which she uses for leverage, and begins choking the Canadian. Layla backs off before the referee reaches the five count and she distracts him long enough for Michelle to plant her foot in Natalya’s face. Layla goes back to work but slamming Natalya’s face off the mat, then levels her with a drop kick to the back. Layla goes for a cover but Natalya manages to kick out after the two. Layla forces Natalya towards the Lay-Cool corner and Michelle makes the tag.

Michelle enters the right with a stiff kick to Natalya’s abdomen. Michelle drops her down with a few elbows to the back of the neck, then follows it up with a knee to the face. Natalya is down and Lay-Cool have the match firmly in control. Michelle gestures towards Natalya and then throws her into the turnbuckle headfirst. Layla makes the tag.

Layla comes back in the ring and Natalya is abused some more. Layla snaps her over onto the mat and starts to play to the crowd. This allows Natalya time to recover and when Layla spins around to attempt a fancy clothesline, Nattie catches her and sends her crashing to the mat. She’s unable to immediately capitalize, so Layla gets up first. She whips Natalya into the ropes but whatever Layla is planning horribly backfires on her. Nattie is able to hook both of Layla’s arms and send her to the mat with a beautiful double underhook butterfly suplex. Natalya goes for a cover but Layla is able to kick out.

Michelle comes into the ring but Nattie sends her out. She screams at her to stay on the outside and mind her own business. The distraction allows Layla to sneak up on Natalya and she tries to set her up for the Layout. Natalya slides through it and grabs Layla by the legs. Layla starts screaming bloody murder and Michelle comes to the rescue. She locks her hands around Layla’s and tries to pull her out of the ring but Natalya is far to strong. She pulls Michelle into the ring as well and the referee intervenes by breaking the grip and sending Michelle to the outside. Natalya locks the Sharpshooter in on Layla and it doesn’t take long for the self-professed co-champ to start tapping out. Nattie lets go of the hold as the referee calls for the bell. Kelly jumps in the ring for the first time tonight and she starts to celebrate. Michelle tries to pull Layla from the ring but Natalya stops it and she finally rips that beard right off Layla’s face.

Natalya puts the beard on, does the Bret Hart, and the crowd eats it up.

How can you not love Natalya? She has played this storyline perfectly. She’s not gotten upset nor has she cried over the fact Lay-Cool has been making fun of her. She’s taken it all in stride, added to the jokes, and she looks like a million bucks going into Sunday’s pay-per-view. I absolutely can not wait to see Natalya versus Layla. These are the type of matches Layla needs to take that next step. She worked the majority of the match tonight and she came off looking great. We talk all the time about how much Layla has improved inside the ring and it bears repeating; Layla is the most improved girl on the roster. She had great chemistry with Natalya and believe it or not, the comedic antics of the match didn’t overshadow the actual match. The costumes didn’t hinder any offense. They didn’t really distract. Lay-Cool got to be bitches and they got what they deserved in the end. Neither member of Flawless is going to be happy going into Sunday and that can only make for one mouth watering match-up.

I think my favorite moments of the match were Michelle’s Bret Hart. She had me dying. I don’t care if the storyline tonight was stupid or childish, it was hilarious. Another favorite moment is the fact Kelly didn’t have to get in the ring. As well as she’s done lately, I think she fit perfectly on the outside tonight. Lets face it, she’s not really involved in this and Natalya definitely doesn’t need back-up. And finally, Nattie winning has given me hope for Sunday. My pre-match prediction will explain this in full detail!

If tonight’s little match is anything to go on, then Natalya versus Layla on Sunday could very well be one of the better matches we’ve seen in awhile. I’m positively optimistic. Will it blow up in my face?