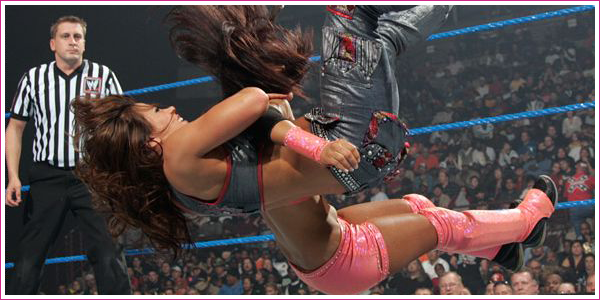 Last time on SmackDown: Mickie and Beth made their SmackDown debuts, both confronting Michelle backstage. Mickie wants to wrestle at Bragging Rights, while Beth wants the Women’s Championship.

This week: Will we finally see SmackDown’s newest Divas in action? How about any buildup for Bragging Rights? Will SmackDown’s team, despite the fact that they seem to be gunning for each other, be able to band together and beat Raw on Sunday?

We start the night, as is usual with SmackDown, with a backstage segment. Mickie James is speaking with WWE legend Mae Young, having a friendly conversation. Things, however, get messy when Michelle McCool shows up (Skip to 1:45):

Michelle tells Mae that it’s nice to see her. Mickie? Not so much. Michelle expresses her sympathies that Mickie didn’t make the team for Bragging Rights and says that there’s always next year. Mickie says she knows why she didn’t make the team–Michelle says it’s because Beth Phoenix and Natalya are way more talented than she is. This high school-level tête à tête continues until Mickie tells Michelle to “break a leg” this Sunday, leaving the scene.

Michelle can barely take a breath before Beth appears behind her, pretty much reiterating what she said last week, threatening to take her title. She tells her she’ll see her Sunday and heads off, leaving Michelle with Mae who says, “She told you!” (Burn!). Michelle tells Mae to shut up, and gets a slap in the face for her rudeness.

Later, it looks like we have a match, as Mickie makes her way to the ring. She’s followed by Layla, and we get started:

They start with a tie-up, Mickie getting control with a side headlock. Layla fights free, shoving Mickie into the ropes. On the return, Mickie knocks Layla down with a shoulder blast. She goes to the ropes for momentum, and Layla flattens herself to the mat to avoid her. Mickie cartwheels over her, dropkicking her the moment they both get to their feet. She attempts a pin, but Layla kicks out, and she drags her back to her feet.

Layla fights and gets control, tossing Mickie out of the ring. Mickie lands on her feet and when Layla makes a move, she sweeps her off her feet, climbing the apron up to the turnbuckle. Layla attempts to knock her off, but is met with a boot to the face. Her second attempt is successful, though, as she hits one giant snapmare, sending Mickie flying off the top turnbuckle. She attempts a pin, but is unsuccessful.

Seating Mickie up, she plants a few knees into her back. We then see that Michelle is watching from backstage. Scouting for her next title defense, perhaps? I don’t know what Beth would say about that.. Layla attempts another pin, but Mickie kicks out and immediately goes for a roll-up of her own. Layla kicks out as well, and Mickie pulls Layla into a headlock, punching her in the head and heading for the ropes. On the return, Layla take up Mickie and plants her with a sidewalk slam, going for a pin that doesn’t even get a 1-count. (Shoulders down, Mickie?)

Layla slams Mickie’s face to the mat, taking the opportunity to taunt the crowd. As Mickie slowly gets to her feet, Layla plays with her, shoving her in the face. Mickie responds with a slap, going on a stream of offense that ends with a neckbreaker. She goes for the pin, getting a 2-count. Layla gets to her feet and knees Mickie in the stomach, going for a head kick that Mickie ducks. She then takes Layla down with a Lou Thesz press, pounding her in the face for good measure. She whips Layla int othe corner but she stops herself, turning around to be met with Mickie’s patented kick to the head. Mickie drags Layla to the center of the ring and gets the pin and the win.

That match seemed pretty short, as is usual with SmackDown. But it was nice to see Mickie taking on a new opponent. There was a certain fire to her that we haven’t seen in a while, and Layla proved to be a nice foe for her. It still isn’t up to Mickie’s former greatness, but we’re headed in the right direction. I think this change of scenery will be the best thing for Mickie, as she was simply spinning her wheels on Raw. Maybe this is the kick in the butt she needs to clean up her in-ring act. Let’s hope they give her room to grow on Friday nights..

Bragging Rights seems to be a bit of an afterthought, Diva-wise, with side mentions being all the buildup we’re getting. Though, Beth’s threats towards Michelle seem to put an interesting dynamic into the match. Will Beth be able to coexist with her new target? We shall see..

And speaking of which, I suppose the upcoming Women’s Championship feud will be a triple threat, as Michelle’s fending off both Beth and Mickie at the same time. I’d like to see that, but I can’t help but think that may spoil two possible feuds too quickly. It would be exciting but sort of pulling the trigger too soon, you know? I’d like for them to keep both Mickie and Beth fresh as long as possible, and this wouldn’t exactly help that. I’d say they should go for Mickie/Michelle first, and keep Beth as a wild card. I know, if wishes were fishes, right?