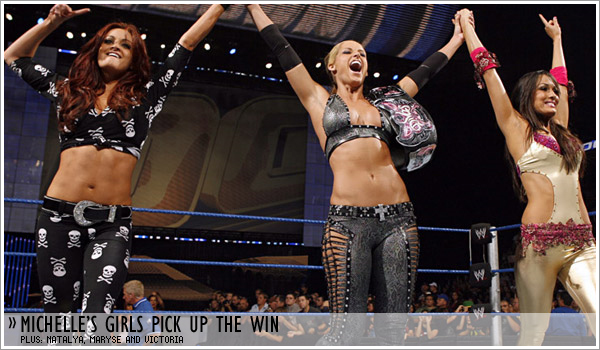 This week on SmackDown: Michelle McCool and team mates, Brie Bella and Maria picked up a pin fall victory over Maryse, Natalya and Victoria in six Diva action.

Thoughts & Reactions
A few weeks ago when I said Natalya is being treated as the new Victoria, boy was I right. Despite all the hype surrounding her arrival and an initial push, Natalya has been pushed behind Maryse and Victoria behind Natalya. There was a time when during entrances, the heel Divas would come out to Natalya’s music and she’d be the centre Diva with Victoria and Maryse on either side of her – it’s evident that Maryse is now being pushed as the top Diva on SmackDown. As beautiful and talented as she may be, there is no stronger heel on among the SmackDown Divas – hell, there isn’t a stronger heel among any of the WWE Divas – than Natalya. Natalya excels at every part of the Diva package; she’s hot, has a great entrance, is comfortable on the microphone, oozes confidence and above all else – is an amazing wrestler. Natalya’s skills not only undermine most of the Divas, but most of the men too. I dare say, Natalya has been a more effective heel than Beth Phoenix in her short time in the company. It’s sad to see her being pushed aside, WWE doesn’t know what it’s missing.

After seeing Brie so impressive in the ring against Victoria, it was time to truly bring her into the ‘Diva fold’, by having her team up with Michelle and Maria. Not only did she team up with them, but scored the win for her team. Since Brie joined SmackDown, she seemed to fit like hand to glove and I am really enjoying the gimmick WWE is doing. It’s not very often the Divas get a gimmick or an actual storyline, so Brie is definitely one of the luckier Divas of the pack. Against Victoria, she had two great matches and I think it’s a definite admission to Victoria’s extraordinary in-ring ability because this week, against Maryse, Brie faltered. Both of these Divas are still learning and growing, so putting them in the ring together isn’t effective. The work between these two felt sloppy, whereas Brie seemed to work great with Victoria and performed a great monkey flip on Natalya. Perhaps Brie needs to be led in her matches?

Michelle and Natalya have great chemistry and I love seeing them in the ring together (minus that awful Great American Bash match), I liked their start to the match. Michelle seems really polished in the ring and has ring presence and to me, that’s what sets her apart and makes her the best wrestler to come out of the Diva Search. I think Erin pointed out something about how it looks odd when Michelle does the “big boot”, personally I love it. It’s such an un-Diva thing to do which is why it stands out to me, not to mention Michelle has the height to pull it off.

As for our Maria? She wanted to pull off a few complicated moves this week, but Maria has yet to work the basics. Maria really should concentrate on those first and not try to mask her lack of basic wrestling skills by pulling off flashy moves. It didn’t work for Kelly Kelly and it doesn’t work for Maria. Maria’s timing is slow, I felt like I was waiting ages for her to pull off an inside cradle on Natalya.

Here’s a thought: How about one of these days, when Brie and Nicole switch places, Nicole actually wrestles for a little bit before getting the win? I’d love to see Brie and Nicole switch mid-match, so Nicole can wrestle a bit too. Maybe they chose Brie to run the angle because she’s a better worker? We’ll see. I don’t know why Michelle’s music played at the end, it’s usually the person who got the pin fall whose music plays. Decent effort by all, I liked the match.

Brie Bella: Not as impressive as her previous matches with Victoria.

Maria: She delivered a surprisingly good bout with Maryse last week, but this week she went straight back to what she usually does… not being very good.

Victoria: Not much to report here, but I do love Victoria.

The Bad: I have looked past Brie and Nicole’s outfits the past two weeks, but there’s no forgiving this. Maria looked like a dalmation.