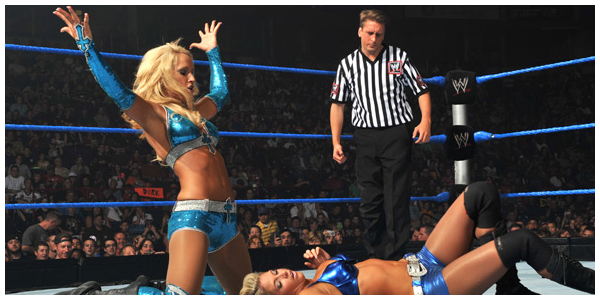 After weeks of little to no direction for the SmackDown Divas, we finally have a storyline — albeit an interpromotional one — with Lay-Cool set to challenge Melina at Night of Champions to unify the Divas and Women’s Championships. If the objective for tonight’s SmackDown segment was to push that match, well, they did a good job. If the objective was for Layla‘s commentary to overshadow and seem more important than the match in the ring, well, they also accomplished that too.

In a video that is 5 minutes long, you actually have to skip to the 2 minute mark for the match between Kelly Kelly and Michelle McCool to begin. 3 minutes for the match? Don’t expect a mat classic. However, as I said above, it looks like the match itself is second to the commentary so it’s not as though we’re expecting an in-ring spectacular.

As the bell rings, Kelly begins stomping at Michelle and then hitting a few forearms but before we can even see 10 seconds of action, the camera cuts to Layla at ringside. Granted, being a big fan of Layla’s mic work, I appreciate the opportunity to see her ramble endlessly but come on, there’s a match in the ring!

Back in the ring, McCool grabs Kelly and hits her with a beautiful belly to belly backbreaker across her knee much to the adornment of Layla. Michelle goes for the pin but no dice and instead begins kneeing Kelly in the back. But our attention is again diverted to Layla on commentary.

Michelle then hits a belly to belly suplex on Kelly but again, we cut to Layla as Michelle goes for a pin. Michelle begins doing press-ups around Kelly’s fallen body and wait… what’s that? Layla again. This time we find out why her skin looks so great…

McCool continues to dominate Kelly in the ring with knees to the stomach, and after yet another cut to Layla, we find Kelly now on her feet and ready to fight back. Kelly goes for the tilt-a-whirl headscissors and connects. She hits a few more moves including a nice drop toe-hold. Kelly then sets up Michelle for a hurricanrana, jumping onto her shoulders but McCool counters with a Faith Breaker and it’s all over.

Anyone else feel like they were watching a tennis match? I was trying to pay attention to the match and trying to pay attention to Layla on commentary but it seemed one definitely overpowered the other tonight. I love Layla’s comedic relief and quite frankly, that is all I took away from tonight’s match. It seems the only reason they put on a match tonight was to put Layla on commentary, evident by the continuous camera cuts to her.

That makes two wasteful matches this week in WWE.