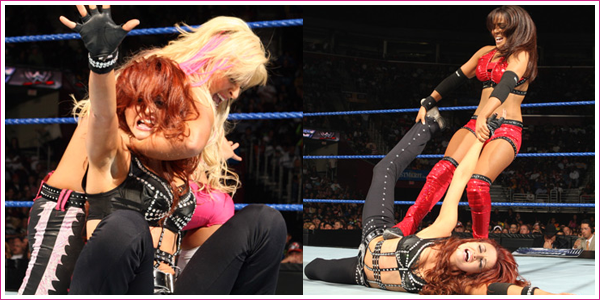 Last time on SmackDown: Melina and Layla went toe-to-toe with Michelle again standing at ringside, this time with crutches and a knee brace. Another rough shove by Melina leaves Michelle writhing in agony.

This week: Is there retribution in the cards for Michelle? Or will she let her “understudy” do the talking/walking? What about Maria–will she continue to play the damsel in distress?

Once again we start this week’s action with a backstage segment pilfered from the daytime soaps. And what else could it be about but Maria‘s woes? I personally can’t wait to see what epic twist the story takes this week! Fake pregnancy? Evil twin? Elaborately orchestrated death? Well, at the very least, I hope someone wears an eye patch..

We see Maria and Eve in the locker room, discussing tonight’s match. Maria tells Eve that all they need to do is go in there with a lot of confidence and passion, because when you don’t have talent, a whole mess o’ confidence will solve all your problems. (Though maybe having a scheme of selling broke-ass calendars with self-indulgent and hokey slogans for $25 wouldn’t hurt either..) Michelle takes the layup that Maria tosses her way, and shows up to remark, “..and you’ll still be losers.” Michelle tears down Maria’s makeup and passion for rhinestones, saying that no matter what she does, Dolph won’t keep his eyes off of other women, like her. (OMG, is that a hint of a twist? Probably not.) She says that Maria is nothing but his “flavor of the week”. (Damn, this has been the longest week of my life..) Maria counters, calling Michelle the most egotistical Diva on the roster.

Melina appears out of nowhere (Seriously, was there a door over there?), but Maria tells her that she’s got in under control. But one insult later, Melina gets in Michelle’s face, and Michelle threatens legal action if she even lays a finger on her. Obviously not interested in filing legal papers just yet, Michelle leaves before things can unravel. Melina apologizes on her behalf, but Maria tells her to stay out of her business. I couldn’t agree more with that sentiment–let’s all stay out of her business! No? Okay..

On the wrestling side of things, Maria and Eve are joined in the ring by Natalya and Layla for that match they mentioned earlier. They reference back to last night’s episode of WWE Superstars, where Nattie clotheslined Eve to hell. Apparently, Eve wants a quick turnover on revenge. Though, we always have to build up to that, so Maria starts out the match. Nattie gets her into an arm wrench and irish whips her in to the ropes. Maria ducks a clothesline and looks to take her down with a body splash, but Nattie catches her, slamming her to the mat. One missed elbow drop later, and Maria takes the advantage, nailing her with a low dropkick.

Natalya backs herself into the corner, and tells the ref to keep Maria back. Apparently one sloppy dropkick is more than she can take. Maria charges into the corner, smashing her with her butt in a Rikishi-like move. Girl, I think you need a little more back there to make that move work. God, that looked awkward.. Maria sets up for what looks like the bronco buster (Oh Lord..), but modifies it into a standing double foot choke. Layla complains to the referee for the blatant choke, but this is wrestling! The babyfaces can get away with anything. This brings Maria over, and Layla sweeps her legs, pulling her out of the ring. Maria takes a swing at her, but Layla decides to split, running away with Maria giving chase. Maria turns a corner, and is met with Nattie’s clothesline. Needless to say, she’s been stopped in her tracks.

Natalya plays with Maria a bit more outside the ring, and Eve seems ready to attack her. Natalya brings the action back into the ring, literally walking all over Maria. She attempts a pin, but only gets 2. She locks her into a back-bending headlock, eventually slamming her back onto the mat. She rams Maria into the corner and tags in Layla, who hops up onto the second rope, locking her legs around Maria’s neck and bending back over the ropes, choking her. Gee, I wonder where I’ve seen that move before.. I know Candice didn’t invent the move, but she’s the first person I though of when I saw Layla bust it out.

She eventually relents, but climbs to the top rope this time, pounding Maria with a flying double-axe handle to the back. She attempts a pin, but no dice, and she tags in Natalya. The two collaborate on a double-team head slam, driving the back of Maria’s head onto the mat. Another failed pin attempt, and Natalya plants Maria with a snap suplex, trying once again for a 3-count. Nope. Opting to isolate Maria from her corner, she tags in Layla, and the Brit goes to work, kicking Maria in the stomach and flipping her to the mat. She focuses on Maria’s back, putting her boots to it and tweaking it with a stretching hold. She keeps the hold locked, switching it to a seated hold. I must say, in this move, Maria’s bondage-y outfit looks more appropriate than ever.

Maria breaks free and tries to get to Eve, but Layla stops her. Maria manages to get away, tagging in Eve. Eve, still on the apron, delivers a shoulder to Layla’s stomach, hoisting herself over the ropes and kicking her in the face at the same time. She goes on a offensive rampage, taking Layla down and even going after Natalya on the apron. She turns her attentions back to Layla, dropkicking her and attempted an irish whip, which Layla reverses and Eve reverses into a sunset flip which Laya reverses (I’m getting dizzy..) into a low dropkick to the face. Layla gets a 2-count on Eve and gets visibly frustrated, yelling all crazy-like.

She forearms Eve and misses a wild kick. Eve scoops Layla up, slamming her and performing that funky front flip we saw last night on WWE Superstars. She attempts a pin, but Natalya breaks it up. Maria comes out of nowhere with a Lou Thesz press, taking her to the outside. JR makes a funny remark suggesting that Maria doesn’t even know who Lous Thesz is (Ouch.. Surely she does.), and Eve takes advantage of Layla’s still-prone body, performing her handspring bodysplash maneuver (She really needs to find a name for that..) and getting the pin and win for her team.

The pre-match vignette was enough to continue the Michelle/Melina feud for another week, with Michelle threatening legal action. With this looming over her head, how is Melina going to handle her frustration? Perhaps go a little Stone Cold Steve Austin on her? You know, hurt her in other ways and just be an all-around badass babyface. We’ll see if it goes in that direction, but having the feud revolve around Maria’s troubles kind of puts a damper on it. Let’s hope it distances itself in the coming weeks.

As for the match, it was pretty entertaining for your standard tag team match. It certainly helped that it featured a different combination of girls than we usually see. Eve barely got any interaction with Natalya, which will only serve to build tension between the two. I can’t wait to see where they go with it–hopefully not another mixed tag match, though. Eve’s performance was a lot like hers on Superstars–lots of flash. I’m still worrying that she’s focusing too much on the flashy stuff, but this match was taped on the same night as that match, so it’s unreasonable to see much of a change between them. Layla is developing into a great heel, working prone body parts pretty well. Her yelling will probably get old quick, though.. Natalya was her usual dependable self. Maria was as awkward as ever. I just don’t see her growing beyond her shoddy presence and dainty maneuvers–she’s stuck in this form, and I have a feeling this is the best we’re gonna get out of her. Just because this is her best doesn’t mean I’m going to sit back and be satisfied with it–she has had so many opportunities to progress and grow in the ring, and she’s just not doing it. Maybe she shares her character’s philosophy–confidence and passion are the key to success! I’m sure you can find plenty of flowery language about them for a few ~inspiring~ tweets, but last time I checked, confidence and passion aren’t miracle cures.