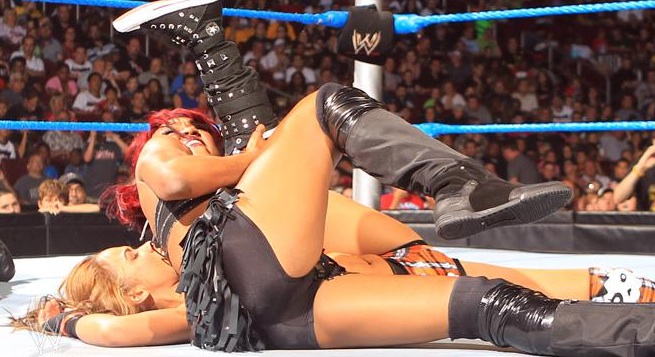 SmackDown is starting to become hit or miss when it comes to Diva matches, but this week we were lucky enough to get one… even if it was the same match we’ve seen several times in the the past. This week. Alicia Fox, who has been on quite the winning streak as of late, leads her team of Tamina and Rosa Mendes into battle against Natalya and her proteges, AJ and Kaitlyn. Can Alicia and co. pull out a win this week or will Team Natalya (finally) be victorious? Check out the match below and find out:

We kick things off with Natayla already in the ring working out their strategy for the match. Alicia, Tamina and Rosa are out next and Alicia is rocking pigtails yet again. I guess having her weave ripped out once was enough for her, huh? Natalya and Tamina get into position to start the match and the official signals for the bell.

Nattie starts things off by getting right in Tamina’s face and talking some trash. Not intimidated in the slightest, Tamina piefaces Natalya and goes for a slap. Natalya blocks the slap and dishes out one of her own, before charging at a stunned Tamina full speed. Tamina tries to cut off Natalya’s momentum, but Nattie slides between her legs and goes for a crucifix pin. Unfortunately for Nattie, she can’t manage to get the Polynesian Princess’ shoulders to the mat. Natalya quickly converts into a sunset flip for a quick one count.

Tamina tries to take Natalya down with a kick, but it’s blocked and Natalya takes her down and goes for the Sharpshooter. Tamina quickly fights out before Nattie can lock it in and hits her signature Samoan drop, nearly sending Natalya through the ring. Instead of going for the pin after her finisher like most people would, Tamina drags Natalya over to her corner and tags in Alicia, who goes right to work, slamming Natalya into the mat, before going into the pin for the nearfall.

Not giving her opponent any time to breathe, Alicia whips her legs around and locks in a leg-scissors. Unfortunately for Fox, Natalya easily overpowers her and hangs her in the “Tree of Joey Lawrence” (Thanks Prazak and Danger) and levels her with a dropkick to the gut. Nattie crawls over to her corner and manages to tag AJ, who speeds up the pace considerably.

Right out the gate AJ evades a charging Alicia and retaliates with a flying clothesline/tilt-a-whirl headscissors/Shining Wizard combination and goes for the pin, which prompts Rosa and Tamina to rush the ring, saving their leader from defeat. Nattie and Kaitlyn come to AJ’s rescue, and the Divas take the fight to ringside, leaving AJ and Alicia in the ring.

Alicia whips a dazed AJ across the ring and charges, but AJ counters with an elbow to the face and goes to the high risk district. AJ comes flying off the second rope with a crossbody, but Alicia dodges and hits her scissors kick to pick up the win for her team.

A pretty good showing for the Smackdown Divas going into the battle royal on Monday. It’s so rare that the SmackDown Divas get included in these Raw battle royals, so I think it was important to make the blue brand Divas look like credible contenders going in, which I think was achieved.

As for the actual match, with the exception of the slightly botched scissors kick ending, it was really good, even if it was a bit predictable. Definitely the best tag match these Divas have had against each other.

Last, but certainly not least, we have to discuss Alicia’s dominance on SmackDown and what it means for the upcoming battle royal. With the recent string of wins lately and the lack of challengers on Raw, it seems almost certain that Alicia Fox is being groomed to have a feud with Kelly Kelly and possibly even a second reign as Divas Champion. Believe it or not, I would actually like to see this feud happen. I’ve enjoyed most of the matches that Alicia and Kelly have had together and I think they could put together something decent at SummerSlam. Also, if Alicia does win at SmmerSlam, it would bring the butterfly belt back to it’s home on SmackDown and give Divas like Nattie and AJ an opportunity to work in a championship program.

Anyhoo, great week for the SmackDown Divas. Hopefully, one of them can be the last Diva standing on Monday Night Raw and make their way to SummerSlam. GO TEAM SMACKDOWN!!!