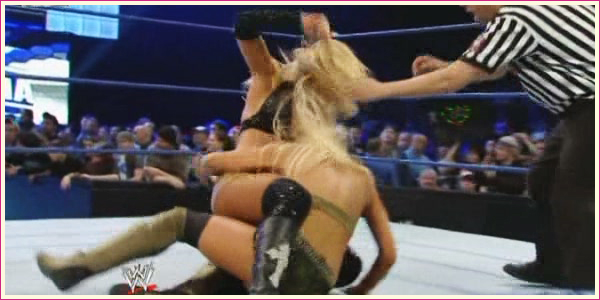 This week’s SmackDown sees Divas tag team action, as Raw’s Women’s Champion, Melina stops by for a visit to team up with Maria and take on Divas Champ, Maryse and Michelle McCool.

A return to form for Friday Night SmackDown following last week’s lackluster Eve-Maryse match. Plus a visit from the Women’s Champion certainly didn’t harm this match! For the second month in a row, the 13th falls on a Friday. And for the second month in a row, Friday the 13th has an opposite reaction for Maria. Last month, she faced off against Michelle McCool in a match that wasn’t half bad and once again here, she isn’t half bad.

I thought this match was good and in line with the effort that Maryse and Melina gave us on Monday night. There wasn’t anything too bad to report about this match. Michelle did a good job of carrying Maria for the first half of the match before both Divas were tagged out. Then we have the champions going at it in shades of their match on Raw.

A lot of people were complaining on Monday night after Melina did a clean job to Maryse but this match was likely the reason why. It was confusing since this episode was taped before this week’s Raw, but obviously since they had Melina win here, they had Maryse win on Raw. My only qualm would be there’s some discrepancy in the two finishes: Maryse pins Melina clean, but all Melina can muster up is a rollup following a distraction? I would have had Melina hit one of her two finishers here, I mean this isn’t Beth Phoenix, Maryse can be jobbed out clean.

The post-match bust up felt a little schizophrenic considering Michelle tagged in Maryse earlier in the match and now Michelle wouldn’t tag back in? Would it not be easier to have them not exchange a single tag during the match until the end and then book this? It just came across silly. But the brawl was nicely done and we get the feeling that even though they’re both bad now, they still hate each other. I don’t know how compelling that will be for the audience though, since we’re not supposed to be rooting for either one. Though I must admit, it’s nice to see a break from the face-heel norm. I expect we’ll be seeing these two renew their rivalry and hopefully a Divas Championship match too. With the 500th episode of SmackDown next week, I think that’d be a good time to book a Divas title match between these two.