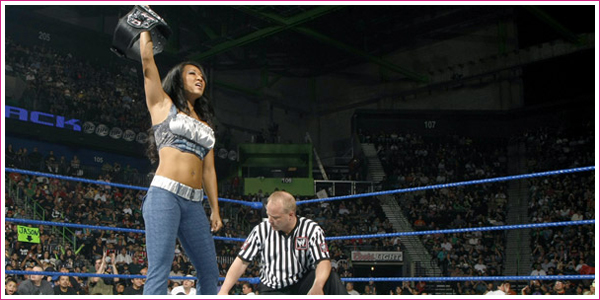 In case you’ve been living under a rock, you’d know that tonight is the night. Making her first television appearance since August of last year, she’s backkkkkk!

In the main event of this week’s SmackDown, it was Maryse defending her Divas Championship against Michelle McCool. Watch below for this week’s Divas action from SmackDown.

So the big news here is that Gail Kim is back! Knowing she would appear at the end of the match, personally, overshadowed the action for me which is not good given this is meant to be a Divas Championship match. Given the Divas involved, this week’s SmackDown in my humble opinion, actually came off a little lackluster.

Given Maryse and Michelle’s electric chemistry in past matches, this match was slow and plodding and hardly befitting of a championship match. It seems as though the new dynamic of Michelle being a heel has ruined the in-ring chemistry between these two; the match just dragged and wasn’t all that entertaining. There were no “wow” moments, no clear offense, no signature moves. As far as I can remember, they just rolled around the ring for a bit. The fire and intensity from their past rivalry was gone.

Then enter Gail Kim. I liked the idea of having her interfering and laying out the competition, but the execution didn’t come off too great. I felt there should, again, have been more fire and intensity in Gail’s assault on her new rivals. A missile dropkick and a neckbreaker and she was done? I thought there should have been a little more assault from Gail to make her really stand out. Maybe clear the ring of Michelle and Maryse, show them that it’s now ‘her ring’, holding the Divas Championship.

I don’t hold anything against Gail or WWE though, return angles are hard to do. I think Gail will go onto do some big things on SmackDown but her return wasn’t 100% perfect, however it was effective. I’m sure she will shine more in future shows.