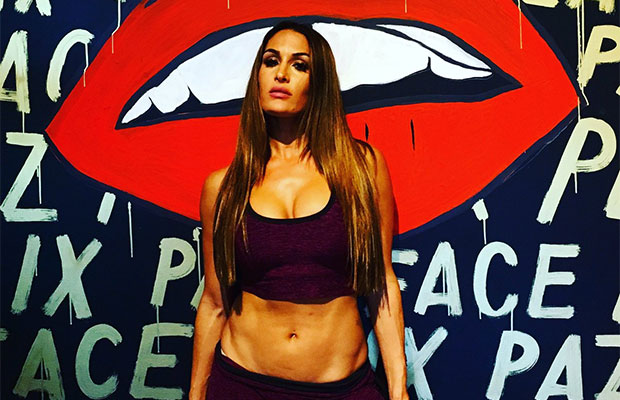 4 incredibly years with this man. No one makes me feel happier, smarter & sexier than you @JohnCena I??U Forever pic.twitter.com/DRQrXGAhyX

Rosa Mendes’ baby Jordan was seen in this adorable Instagram video this week:

We bought her a new car today. I told her to honk the horn and she did! #babygenius @realjordanschubenski

Jade posted a throwback of herself and Eddie Kingston:

Alexa Bliss celebrated her birthday this week and received some well wishes from her co-workers:

Congrats on your big win tonight on #smackdownlive @AlexaBliss_WWE AND happy birthday to you! ????? … pic.twitter.com/lJUYJowVh7

…and the other for Muscle & Fitness:

Kay Lee Ray celebrated her birthday this week, and received a wish from her friend from TNA:

Bayley and Sasha Banks met a big fan this week:

Whilst in Sydney, Sasha Banks took advantage of her time off to catch some Pokémon:

Natalya and her husband Tyson Kidd had a big, heated debate on Instagram this week:

Big debate on who our favorite cat is………. (When It comes to @2pawz, my voice dramatically changes… Thanks for bashing him, TJ)

After receiving new lunch boxes for merchandise, Bayley and Sasha Banks promoted them the best way they knew how:

Who wants to have lunch with me? Get your hugger lunch box now @WWEShop! ??????? pic.twitter.com/qNPR3uiRAr

Thanks for putting me over @wweshop

An exciting announcement on the air date of Maryse’s new movie was announced by the Total Diva:

Dana Brooke, Charlotte and Seth Rollins had some fun promoting WWE during their Australian tour:

Naomi sent out a throwback of her time in developmental (she’s had a great glow up, I must say):

Attention all haters! … i was doing shades way back in 09' I'm to creative to have to copy any one so "glow me"?? pic.twitter.com/78nz3VG9Wp

Despite what we may have thought beforehand, Natalya revealed that it was Brie Bella who’d come up with the name for her famous cat 2Pawz:

Funny story…. Brie Bella came up with it @BellaTwins ?? https://t.co/Qvi9RLNZMn

Total Divas Lana, Naomi and Renee Young had some fun together:

Summer Rae spent some time with Natalya at a WWE live event to teach her some evil ways:

Summer is teaching me how to be as evil as her……… ?????? #WWEHidalgo @daniellemoinet

Rosa Mendes showed her support for the musical genius 2Pawz:

All the cool kids are wearing my cats shirt! …??????? @2pawz #ThugKitty @wwerosamendes

Sasha has worked hard & deserves every praise, I wish people would stop comparing we support each other https://t.co/AUzeLecryh

All Red Everything Eva Marie hit the red carpet for Foxwoods LiquidSundays in this stunning outfit:

It is goin off right now @foxwoods #LiquidSundays #AllRedEverything is in the building ???

Here is beautiful @LaRosaMendes and I backstage at #Raw 2 years ago giving a very serious look about something. pic.twitter.com/khj9NU9KAM

After much anticipation, AJ Brooks received some news about her book:

Got a peek at my book cover & I don’t want to oversell it or anything, but it’s good enough to be the picture the news uses whenever I die.

As Naomi made her return at a live event, a fan shared a video of her new entrance:

And finally, Nina Samuels ran with her family in the first ever Hart 4 race: