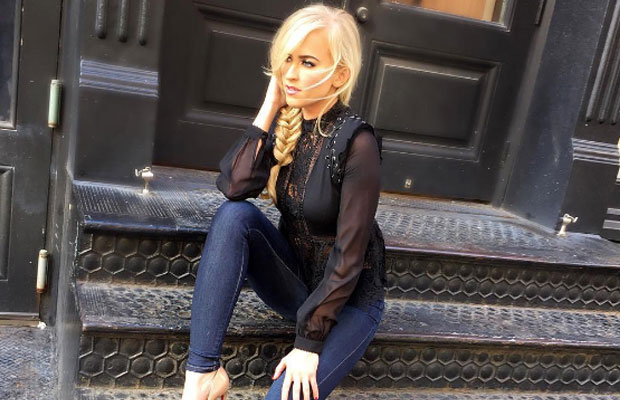 Natalya shared her love for her husband Tyson Kidd:

My motivation to keep fighting, working hard and above all else, staying strong ?? pic.twitter.com/NKGPe5PRRO

Nikki Bella celebrated the 1 year anniversary of her breaking the reign to become the longest reigning Divas champion:

Becky Lynch has been having some pun as the champ:

Got stopped going through TSA today. My bag was apparently detected for explosives. It must be because my new title is da bomb!!!

Rosa Mendes shared this adorable picture of her baby girl Jordan on Instagram, with a great caption:

Going to raise this beautiful baby girl to be strong, hard working, and to live life to the fullest. She's my best friend, she drives me, she motivates me to work harder than ever. The world is our oyster @realjordanschubenski. #motherdaughter #wwesuperstar #wwesuperstarmom #wwemoms #womensempowerment #motivation #happiness #strength

Torrie Wilson shared her enthusiasm on being the cover girl for Fitness Girls magazine:

There's some serious #Fitspo in this new mag! Get your copy if you know what's good for you. ? #Fitness #Workout pic.twitter.com/JJqOhyHqnz

Michelle McCool shared this adorable photo of her daughter:

Ten years ago today I took my final bow at the @aircanadacentre in front of my hometown crowd in #the6ix. A bittersweet day as I was closing the chapter on my @wwe career but I was about to embark on the next chapters of the rest of my life. I couldn't have asked for a more perfect setting to say good-bye.. To have my retirement match in Toronto, against my arch rival (and bestie) @machetegirl and to do something that had never been done before, to enter the history books as a seven-time @wwe Women's Champion, well, it was something dreams are made of. Even too amazing for an ambitious, athletic wrestling fan girl to dream of… Who would have thought that the opportunity to be a part of the WWE family I was presented with in 1999 would have led to this! All I knew in 1999 was that I was capable athletically and I had a passion for wrestling that was fuelled by a drive and ambition that had pushed me to try to be the best in every other area in my life. I knew that if I was given the chance, I would take that ball and run. I knew I wanted to change the perception of how women were viewed in the wrestling world. I knew I wanted to be remembered as one of the best. I'm thankful for the opportunities @wwe gave me and for having Fit Finlay be my partner in crime to help navigate them. I'm thankful for all the hard working, athletic, kick ass ladies I got to work with, and I'm thankful to have had the support of you guys for the whole ride, watching me fall down and then dust myself off and get up, watching me grow up before your very eyes. And, to have you guys still here by my side is everything. It's been 10 years since I retired, 16 years since I started wrestling and here we still stand. I've still got some Stratusfaction to deliver if ya want it! Here's to another decade of Stratusfaction! #thankyouwweuniverse #decadeofstratusfaction #seventimewomenschampion

The tag team we never knew we needed so much took over WWE Live:

Natalya, Alexa Bliss and Carmella were feeling the glow in Springfield:

Santana Garrett was extremely happy to have made it into LA Times:

Maryse spent her weekend at Vegas at her friend’s Bachelorette Party:

Vegas was too much fun!!!! Lets do it again soon!!!! #amandasbachelorette #vegas #sincitykitties

Brie Bella and her husband Daniel Bryan had fun with E! on the red carpet of the Emmys:

Mandy Rose shared this Go Fund Me link to aid her young cousin that is recovering from multiple surgeries:

My cousin Lucas is in recovery from multiple surgeries, any help would be so greatly appreciated!???

Its official! The first lady to represent RHODES as an in-ring competitor. Thanks @IMPACTWRESTLING CANNOT WAIT! ?? https://t.co/WW12zcmQmB

And her new co-workers were excited to welcome her to the show:

So excited to have @TheBrandiRhodes on the @IMPACTWRESTLING #Knockouts roster! pic.twitter.com/XJnsE07pmd

And to end the week, Eva Marie and Renee Young celebrated their birthdays today and got a lot of well wishes from their friends:

HAPPY BIRTHDAY to my Queen, my ride or die @natalieevamarie!! Love you! #PowerAlliance for life ???? pic.twitter.com/kACHPTuTmB

Happy birthday to @natalieevamarie biggest heel in the bizz. Love it. ;) love ya girl! #AllRedEverything

Happy birthday to the blondie to my Joan Jett @ReneeYoungWWE here's a flash back pic of us. pic.twitter.com/vl80XrkBWu