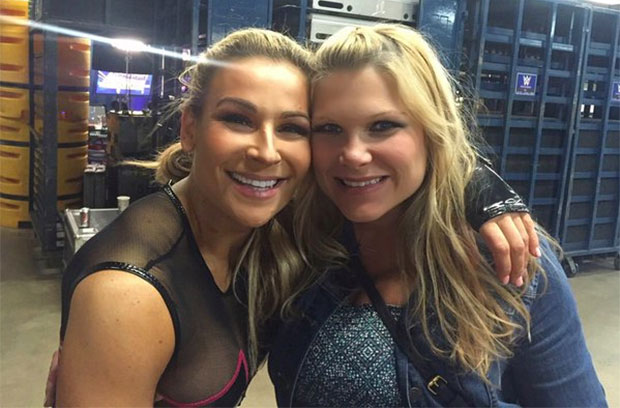 Brie Bella took to Twitter to announce that once she is officially #MamaBella, the Women’s Championship will be hers:

WWE took a stop at Raleigh, also known as the home of Charlotte’s college graduation. To celebrate the moment, the Women’s Champion posted a selfie at the location alongside a throwback picture of her graduating with her brother by her side:

NXT’s Tye Dillinger complimented WWE Superstar Emma on Twitter, stating that she’s the most underrated competitor in the women’s division:

As NXT stopped off at Portland, we got an adorable live chat on Facebook from none other than Nia Jax and Alexa Bliss:

WWE’s very own Renee Young managed to upload a brand new Q&A on her blog:

The leader of the #HugNation, Bayley, shared a pretty cool version of her entrance, as seen from her point of view:

Former Divas Champion Paige had some fun with teammates Sasha Banks and Becky Lynch as she gave her best attempt at a Nae-Nae during a house show on the weekend:

WWE Chief Brand Officer Stephanie McMahon surprised us all as she announced her new book that she is currently working on:

Excited to share the news: I’m writing a memoir of my life growing up in @WWE! #StayTuned for more info. @ReganArts pic.twitter.com/SYAXhxfEyl

Brie and Nikki Bella attended the annual FOX Upfronts for John Cena’s show American Grit and to discuss their new show Total Bellas. Other posts include a Nikki and Cena kiss and some red carpet photos.

Brie Bella’s husband and former WWE Superstar Daniel Bryan upped his social media game a little as he posted a tweet about a surprise he has in store for his wife:

After her first ever main event on Monday Night RAW, Natalya posted this adorable picture alongside the wonderful Shane McMahon:

The Divas of Doom reunited in this backstage photo posted on Natalya’s Twitter:

My twin. ??? (She taught me how to be UNBREAKABLE…) @TheBethPhoenix pic.twitter.com/2H6phnNnUC

Renee Young decided to tease us with two potential episodes of Unfiltered. One of which may be featuring our favorite Brit, Paige:

Former NXT Women’s Champions Sasha Banks and Bayley decided to pose with WWE’s “Greatest 100 matches” book as their Takeover: Brooklyn match made the list and the cover (the book is available to purchase now):

Greatest 100 matches @WWE on sale now! Go get it pic.twitter.com/1WQJWZW0nw

Make sure to pick up your copy of @WWE 100 greatest matches! So many classics, so many legends. What an honor ? pic.twitter.com/q7JrGuLMTt

NXT rookies Liv Morgan and Aliyah hosted a Q&A on the NXT Facebook page so that fans could get to know them a little better:

After a shocking announcement regarding her back surgery, Emma thanked fans for their support. Her fellow female Superstars also joined in on the love.

Thank you all so much again for the support and keeping me in your thoughts! Surgery went well today! Just resting up now! ??

New Sasha Banks merch was released in the WWE Shop:

New Tanks and Muscle Tee are now available @WWEShop buy and put me over! #legitBOSS pic.twitter.com/atDl7si9f3

At 67, my mother has started a new company @WLeadershipLIVE. Talk about a role model! I'm so proud of you Mom! pic.twitter.com/1sljIm4MWF

The Queen of Harts Natalya and the Swiss Superman Cesaro had some fun in the gym and were more than excited to share their time with us: