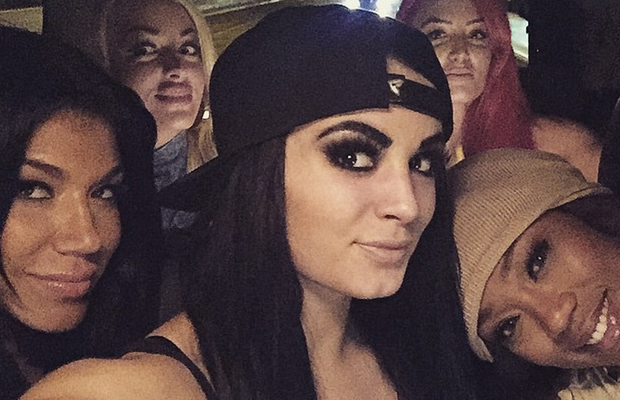 Lana and Dolph Ziggler may not be a real life couple, but kudos to these two crazy kids for keeping kayfabe alive. Lana posted several adorable photos of the “couple” at Disney World this week, but this sweet smooch has to be our favorite. The Archer reference doesn’t hurt, either:

#DisneyWorld ? with the boo @heelziggler he surprised ? me ??

TNA Knockout Gail Kim shared an adorable pic of her getting a big smooch from an equally adorable pup. It looks like the wrestling community aren’t the only ones who adore the former Knockouts Champion:

We got caught in a kiss! Hahaha I love her ?

Revenge is sweet, though, as evidenced by the shiner Lana gave Summer on SmackDown. Summer tweeted a photo of her black eye sans caption, proving that a picture really is worth a thousand words:

Leva Bates (or, as NXT fans know her, Blue Pants) posted this tribute to Scream director Wes Craven who passed away earlier this week. Leva is known on the indies for her cosplay ring attires and this is definitely one of her most memorable:

"(Life) is all a movie. It's all a great big movie. Only you can pick your genre."-Billy {Scream} #throwback #RIPWesCraven

Nothing is cooler than getting a sneak peek at the latest gear the Divas will be wearing. Charlotte revealed stunning new ring gear that she debuted on this week’s SmackDown. It goes with her shirt colors and logo perfectly:

What good is a road trip without a group selfie? Paige posted this pic that would send any Diva fan into a frenzy. She’s riding down to Miami along with Alicia Fox, Eva Marie, Rosa Mendes and what appears to be Tough Enough finalist Amanda. Hmmm….

Road trip to Miami. Got some real creepers in the back.

Amanda fueled speculation in an Instagram post of her own, musing, “Everything happens for a reason.” Fans have taken the ball and run with it, wondering if the Tough Enough runner up has already been signed by the WWE:

Everything happens for a reason? #FeelingGrateful ?

Brie Bella showed Mama Bella and Grandma Bella some birthday love this week by sharing this gorgeous family photo. Three generations in one photo, great sight and a sweet sentiment:

Happy birthday to the two most important women in my life… My mom @kathycolace and my Nana. ???? #family #love #birthday

Fans have been speculating for a while, but Natalya made it official this week: the next season of Total Divas filming is officially underway. WWE’s resident cat lady shared this photo of her family watching Total Divas while being filmed for Total Divas. Reality meets reality. Insert your Inception references here:

Knockouts Champion Brooke shared a stunning photo from a recent photoshoot. Brooke, who many know to be an ardent animal lover, is pictured with two prized possessions here: a fierce dog and the Knockouts Title. Beauty and the beast:

Beauty and the Beast.

Contrary to how stunning they all look, it takes some work to make a Diva look absolutely flawless. Eden let us in on her secret to her stunning beauty, her make up artist, who is apparently her husband Stardust:

He is serious about this.

Naturally, Eden returned the favor, helping Stardust get his own look camera-ready:

What you're actually missing. pic.twitter.com/ZdfiXTL193

The Divas Champion is usually killing it in front of the camera, but Nikki Bella showed a new side of herself this week, sharing this photo of herself snapping away with some heavy duty camera equipment backstage. No word on what she was taking pictures of, though; possibly the Bella Clock counting down to 296?:

Ready for your close up? ? #TotalDivas is on 40 mins! Only on E! @enews @eonline @wwe @totaldivas @wowcouture_usa

How fabulous is Torrie Wilson looking 8 years after her WWE departure? The former Playboy covergirl posted this photo of her laughing in a relaxed tank top and shorts:

Laughing = Happy ??. Especially if it's at yourself. ?

Fellow former Diva Anya was also spotted on social media this week, soaking up the sun alongside none other than The Boss, Sasha Banks:

Tough Enough may be wrapped up for the season, but what’s wrong with reminiscing? Lita posted this photo of the women of Tough Enough: herself, Renee Young and Paige:

This may be the first @wwetoughenough -less Tuesday, but you can't keep this trio apart! #bros

Last, but not least: Mama Bella is making a second appearance on our first social media wrap-up. She may not be a wrestler, but she birthed Nikki and Brie Bella, so we felt her post was worthy of inclusion. The Total Divas scene-stealer announced her engagement to none other than former Raw General Manager John Laurinitis! Who would have guessed the two were an item? Hmmm….looks like the Bellas may be the newest family of wrestling royalty: