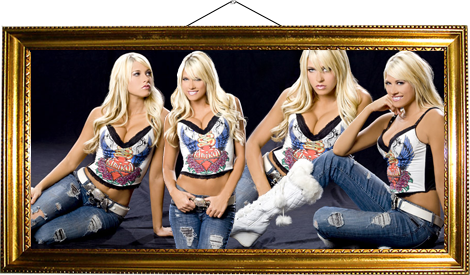 Kelly Kelly in “All Heart”

We’re debuting a new format for our Eye Candy posts – complete with more detailed critiques and “graded” categories. View the photoshoot we’ve “hung” on our wall, read our critique, vote, and last but not least – sound off in the comments!

The Look: This look has a decidedly rock n’ roll theme, with the destroyed jeans and “winged heart” cropped top. It works well for Kelly, though you wouldn’t suspect someone like her to be the type to adopt such a style. The belt buckle, for instance, a winged skull, is almost too tough-looking for the sweet Kelly, but I can’t say it looks bad on her. It’s edgy enough without heading into “Rock of Love” territory (and believe me, Kelly’s about 20 years off from that, thank God). The boots, though, look like ones Mickie would wear back in the beginning of her WWE tenure, and I pretty much hated them back then. The cuffed furriness is and will always be hideous to me. Give them back to Mickie, Kelly! Or better yet, burn them. Grade: B

The Poses: Kelly’s adopted a few new facial expressions, and they’re on display here. I’m glad she’s developed to doing more than just smiling in every single picture (though I’ll miss the “Kelly’s a statue” jokes), though I wonder if the Divas have had some coaching on poses. It seems like all of them have adopted the “look off-camera” pose as of late. Don’t get me wrong – I like it, I just find it curious that everyone seems to be doing it all of a sudden. But back to Kelly: she keeps her poses casual, sitting and letting her legs do the talking so to speak. It befits the more casual look. Frankly, I’m just glad we’ve graduated from merely alternating “hand on hips” and “hands on head”. Grade: A-

Uniqueness: It’s definitely not your typical Kelly fare, and for a Diva that’s known to be rather lacking in variety, that’s enough for me to deem it “unique”. Grade: A

Overall: It’s not Kelly’s best shoot, but it definitely caught my eye. She’s coming into her own on the photoshoot front, and hopefully it won’t be long until we anticipate hers like we do Layla or Maryse. Grade: B+