Sunny: “These Girls Wouldn’t Have Jobs If It Wasn’t For Me” 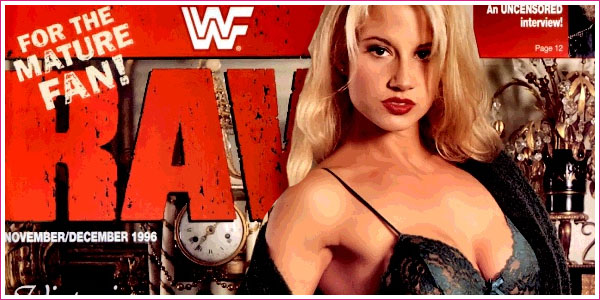 Seriously, someone needs to lay off whatever prescription pills she’s popping and sit the fuck down. Yes, Sunny, I’m looking at you girl. This isn’t exactly news – well recent news anyway – but run with me on this one. I just uncovered a couple of interviews that Sunny recorded earlier this year, I’m not sure if they’re pre or post-WrestleMania. And let’s just say homegirl is sipping from the same cup as Paula Abdul. Long story short, bitch is crazy!

In such interviews, you shall hear such hilarities as:

After insulting fellow former Diva, Sable by saying she looks 60 years old, Sunny says: “I’m 36 and I get told I look 28 everyday.”

On the emergence of Divas: “I consider myself the first total package as far as females go in the wrestling business.” In the process, she can’t help but make a pitstop and spit on Miss Elizabeth and Sherri Martel‘s graves, insulting the both. Sunny continues that apparently VinceÂ  realised that women could be successful and marketable too, from using her. Okay there, sport… To hear that clip, click here.

It don’t stop there boys and girls! The “Sunny: Self Wank” tour continues in a second interview clip which can be heard by clicking here. And here’s where we think that Sunny, real name Tammy Lynn Sytch, overdosed on her meds. When regaling us with a delightful story of an independent show she worked, Sunny refers to a girl who was founded in one of WWE’s talent searches (i.e. Tough Enough, Diva Search) that *Gasp* dared ‘disrespect’ the almighty pioneer and founding mother of all things Diva. Sunny explains:

– She walked into the lockerroom and started getting ready like she owned the place. Like she was this queen diva. And the first thing she should’ve done was was come to me and introduce herself to me and basically thank me for, you know, the possibility of her having a job because I opened the doors for all these women.

– She definitely did not have the respect that she should have, especially like I said I did open the doors for all these girls. These girls would not have jobs if Vince didn’t learn how to use a girl correctly and that’s what he did, he used me as the mould. He learned how to use a girl and market a girl correctly, through me and these girls wouldn’t have jobs if it wasn’t for me.

*Blink* Has her head exploded yet? ‘Fraid not. So basically we’ve learned that all the great females we’ve seen pass through our lives in the past 15 years or so are all because of Sunny. But of course! I’ve always thought Sunny was a tad *cough* outspoken but this is beyond outspoken, she must have neck and shoulder pain from carrying around that big ole head.

It seems to me that homegirl seems to have some grandiose, distorted memory of the past because she wasn’t all that and a bag o’ peanuts, as she seems to think. Not even by a long shot. Divas like Trish, Lita, Victoria, Mickie, Gail and so many more wouldn’t have jobs if it wasn’t for her?

All those years of interviewers kissing her ass calling her ‘the original Diva’ seem to have gone to her head as Sunny thinks she can rewrite history, saying she took great photoshoots, knew how to work a microphone and even get in the ring. Hold the fuck up…. “I could get in the ring if I had to?” Really? Girl, you never competed in a match in your entire WWE career until three weeks ago, WrestleMania 25 was Sunny’s first official wrestling match in WWE. Honestly, she’s worked up such an inflated ego and such a deluded legacy of her time in the industry, it’s pitiful but laughable at the same time.

Say what you will about Sable – and trust me Sunny has – but she is the true pioneer of the Divas. Sure she, too, got in on the prima donna act but at least she accomplished things. I credit Sable 100% for the Divas roster we see today, I wouldn’t even spit shine on Sunny’s shoes. It seems everything Sable accomplished, Sunny seems to take credit for herself; Sable was truly the first Diva to cash in on being as marketable as her male counterparts. Sable was a bonafide draw for the company and eventually learned the in-ring aspect of it too and of course, became a Women’s Champion. She wasn’t the best wrestler granted, but she paved the way a hell of a lot more than Sytch ever did.

KMT ’bout “They should be thanking me.” Girl, you should be the one thanking. Thanking the industry, thanking WWE and thanking Sable for giving you the ‘high school stories’ you keep spouting to anyone who’ll listen to this effin’ day. I wash my hands of this haggard, nasty piece of work. Sunny, you and Diva Dirt are done professionally! (Unless you do something of note)