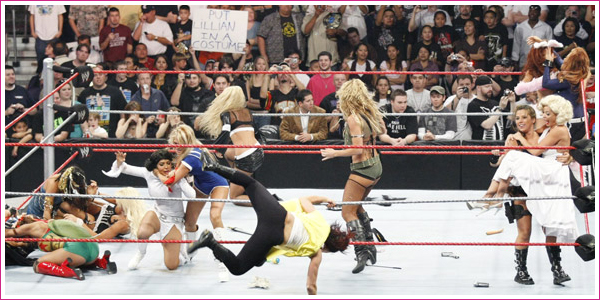 Anyway, this month’s column is kind of hard to write so I’m going to add my opinions on costumes seperately. As for the segments and the catfight, it all just seemed a little sloppy and I couldn’t help but roll my eyes at all the shenanigans. While I liked some costumes, this doesn’t make up for a lack of match. The catfight at the end was ridiculous and as you can see from the picture above, why on earth was MickieÂ  holding Candice? It just looked like a silly routine from a bad comedy double-act. Did anyone else notice Mickie fall over at the end of the segment too? I lol’d. Anyway, it was great to see Mickie pick up the win here, I really thought it would be between her and Kelly and I’m glad it was Mickie over Kelly. What does this prove? That Mickie, no matter how much WWE tries to push Candice and Kelly on us, is still the most popular Diva in WWE today and deservedly so.

Now onto the costumes:

The Good
I thought Beth’s costume really suited her as the Glamazon, it looked great and so did she. Brie Bella‘s Cleopatra costume was perfect for her, she definitely has the right look to pull it off and did so. Eve’s very original and outside-the-box Ninja Turtle costume was a lot of fun to see, I really liked it – it showed personality. Lena Yada looked mighty fierce in her ninja outfit, this was my favourite outfit of the entire night. Who’d have thought it? Lena Yada winning my vote! Mickie pulled off her Tomb Raider outfit very well also, I’m not sure how it compares to Angelina Jolie, but I thought Mickie had the right look to pull off Lara Croft. And last but not least – Victoria! God, is there anything to really say here other than LMFAO!

Best of the Best: Lena Yada as a ninja.

The Bad
Candice’s Marilyn Monroe costume was just so cliched. And dear God woman, a little warning before you try to sing. Kelly Kelly as a sailor hmm, there was nothing fun or original about this costume. It just looked like Kelly Kelly in a slutty sailor outfit trying to look sexy. Layla‘s Princess Leia outfit wasn’t flattering on her, neither were the buns. But I do give Layla points, because she really showed some acting chops in her little segment, I thought it was pretty cool. Maryse‘s French maid costume was again, cliched. It actually doesn’t look too different to something she’d wear in the ring either. Natalya‘s cop costume was just unoriginal. And Tiffany’s skanky nun was offensive to some apparently and just looked tacky and cheap.

Baddest of the Bad: Kelly Kelly as a sailor

The Ugly
Jillian‘s Batgirl just didn’t work for me, it looked odd to say the least. Katie Lea‘s vampire hmm… when I heard she was going to be a vampire I thought it could go one of two ways: a cool sleek vampire or an over the top mess. Unfortunately, Katie went for the latter. It’s nice to know she’s not afraid to fug it up but this is a WWE Divas contest, let us not forget. Just like most Maria outfits, the bunny costume was too over-accessorised with fur flying everywhere. But apparently she made it herself, so go figure. The outfit was cliched also, like so original, Maria. Michelle McCool‘s army costume was just one big ole tranny hot mess! Everything looked like it had just been thrown together, it didn’t look like a costume you could just purchase at Wal-Mart. The coat didn’t even fit her and the tights were kinda skanky and Michelle is not skanky.

Ugliest of the Ugly: Michelle McCool as an army brat.