Systematic Breakdown of Night of Champions 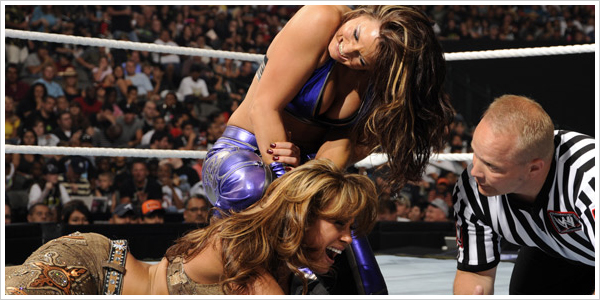 We are dusting off our monthly systematic breakdown, looking back at last night’s Night of Champions pay per view. With the Women’s Championship on the line, it was Mickie James defending against Katie Lea. This is a match I have been looking forward to, but it seems almost thrown together at the last minute – this match could definitely have benefited from a storyline behind it. Nonetheless, both Divas worked hard and delivered a decent match – if a little disappointing. This match to me, was average, it wasn’t bad but it hardly lit me alight in the same way as the iconic “I Quit” match at One Night Stand. Couple the average match with the lack of story history and again, average.

I give the girls credit, they did the best with what they had to deliver a good match and both Katie and Mickie worked hard to tell some sort of story during the match. The plot with Katie working over Mickie’s shoulder was nicely done and for a moment there I was even left thinking if Mickie was legimately injured when she was thrown into the ring post. However as I write this post 24 hours later, there’s not much that really stands out to me about this match – would it be any different on Raw? I definitely think the lack of storyline going into Night of Champions hurt this match, I wasn’t expecting a five-star classic and knew beforehand that the match would be just “okay” but I could have easily been enticed into the match with good plotting on Raw in the weeks leading to the event. Unfortunately, WWE’s schizophrenic booking leaves a lot to be desired, go figure…

As for the ring work, this match seemed a little sloppy to me, Katie didn’t look as technically sound as you’d expect an experienced wrestler to be. I think while she is a fine wrestler, she just doesn’t seem polished in the ring, meanwhile Mickie was on fine form last night. Perhaps giving Katie more matches at house shows and on Raw will help her, she’s not a bad wrestler at all but these two didn’t seem to mesh which is a shame given their red hot mixed tag team match on Raw a while back.

Fashion wise, I was feeling both of their outfits. It’s nice to see Katie in something new and that shade of blue definitely complements her. Meanwhile, Mickie looked much better than usual, I think the understated look works for her.

In all, this match was fine for what it was. Coming off the One Night Stand match earlier in the match, it is somewhat anti-climactic however. Match Rating: 5/10