Systematic Breakdown of No Mercy 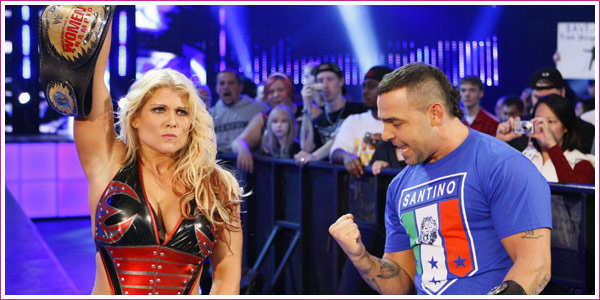 The history books for the 2008 edition of No Mercy will read exactly like the 2007 edition: Beth Phoenix def. Candice Michelle. The Glamazon retained the title against the former Women’s Champion and her longtime rival. I’ll be completely honest (when am I not?), this feud hasn’t interested me in the slightest bit and I wasn’t very anxious to see this match. However, now with the dust settled I can say that the match and both Divas were competent. This match wasn’t a complete snooze-fest nor did it set my world on fire; the work was fine and actually, I’d prefer to think of this match as a ‘building block’ to a second match between these two, one which I hope will be far more enticing.

Given the lack of storyline going into this match, I wasn’t really expecting much but both Divas performed well and the match told a story which is what I enjoyed the most about it. Beth working over Candice’s repaired clavicle added some in-ring psychology, meanwhile the interaction between the two was good also. The two Divas really worked with what they had and tried to make their feud seem ‘epic’, which it could have been had WWE actually invested some time into writing it correctly. Alas, they didn’t, but both Beth and Candice tried to convey a sense of epicness to us nonetheless, drawing on their history with Beth going after Candice’s shoulder and almost taunting her at the start of the match.

For me, No Mercy was a real test for Candice. As I wrote in my prediction, this was the match that counts and this would determine if she can really cut the mustard amongst the likes of Michelle McCool, Kelly Kelly and Maryse who’ve all applied themselves and become good wrestlers while Candice was injured. This was the best Candice looked in the ring since her return, I’d say. I wasn’t sold on her match with Jillian a couple of weeks ago on Raw but No Mercy was a much better fare for the Go Daddy Girl. That said, Candice still has a long way to go and still shows signs of ring rust. I felt her moves were slow, there was no fluidity from one move to the next – you could tell she was thinking about what she was going to do next. The work was sufficient, but if Candice is going to be Women’s Champion again, she needs to up her game. Some people have ring presence and some just don’t, Candice is awkward in the ring; from the way she puts up her fists to her lack of fluidity in the ring. Like I say however, this match is fine for now but a month or so down the line when we see Beth vs Candice Part 2, I’d expect more from Candice if she’s going to win the title.

The end of the match was great stuff, I think it was a solid end and really ended this match nicely. No silly roll-up but a nice, definitive ending. From Santino pulling Beth out of the ring completely (that looked like it hurt) to Beth shoving down Candice (that looked like it hurt too) and then the Candy Wrapper into the Glam Slam was a befitting end. All in all, the work was sufficient and both Divas held it together from bell to bell.