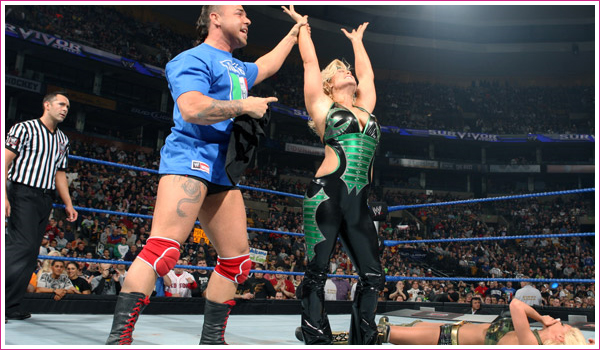 The phrase ‘match of the year candidate’ has been thrown around in regards to last night’s Divas traditional Survivor Series elimination match. But it’s time for Diva Dirt to weigh in… was the Raw vs SmackDown match really that good? I would say while it was not the most technical match, it was a lot of fun to watch and for that reason I too, would consider this a potential match of the year candidate.

This match has been a dream match for me for a while now, I really wanted to see the Divas get the traditional elimination treatment and finally that became a reality. I didn’t think it would happen, I never thought WWE would give the Divas enough time on the card to have an elimination match but they finally did. And my verdict is that it turned out really well, it was fun, fast-paced and the fans were into it. I would definitely like to see this become a permanent fixture to Survivor Series each and every year. It doesn’t need to be Raw vs SmackDown every year (maybe heels vs faces or team captains picking their Divas), but I definitely think that the risk paid off and WWE should treat this as a guinea pig for future Survivor Series pay per views.

Anyway, the match got a good 10 minutes which is about the most I thought the Divas would get. I feel it could have benefited from more time, as eliminations occured far too often whereas with the men’s matches, they are sporadic. However, given the time they had that was to be expected. The real shocker here is some of the Divas who were eliminated early on: Kelly Kelly was the second Diva to be eliminated and SmackDown’s team captain, Michelle McCool was third. I’m not sure what happened there given their strong, prominent roles on television. Meanwhile Jillian lasts almost the entire match? Okay!

The match started out very strongly, Beth vs Michelle was good stuff, they had great chemistry and were really going at it. Beth then did some good moves with Maria but here’s where things began to go downhill for a moment: Kelly got tagged in. Kelly vs Maria? The next minute or so seemed to plod along as Kelly and Maria stumbled around the ring, sure they’ve improved but pitting them against each other showed just how green they really are. Thankfully, Victoria tagged in and order was restored. The match livened up as Mickie tagged in and here came one of my favourite parts of the match: Michelle and Mickie. They shared a really great chemistry, great athleticism and it really whet my appetite to one day see them go at it one-on-one. The prospect of that match is very appealing to me now.

If you ask me, Candice was the weakest link of either teams last night during her part of the match with Natalya. She looked hesitant and slow in the ring. Natalya got a great reaction from locking in the Sharpshooter, that was fun to see. The MVP of the night has to go to Maryse, her cockiness and arrogance really made this match. From fighting with her own team mate to standing up to Beth Phoenix, Maryse was on fine form and I really hope that come Tuesday night’s SmackDown tapings she’s put back in the forefront of the Divas Championship picture. She really shone in this match. Beth wins to the shock of no one…

I think it’s a real testament to SmackDown that there was interplay between their Divas, even though they lost the match. They managed to play up on storylines such as the hate between Michelle and Maryse as well as the ‘rivalry’ between Michelle and Maria. Meanwhile Raw had no story to tell except shock horror, Beth is the strong, dominant Glamazon. SmackDown are the real winners here, they have come out of this pay per view with fuel to add to storylines come this week’s SmackDown.

I definitely think this was a risk worth taking, it showed that the elimination match for the Divas can work and I hope this is the start of a yearly tradition. The crowd seemed as into the end of this match as they did the men’s matches, which is surely a good sign.