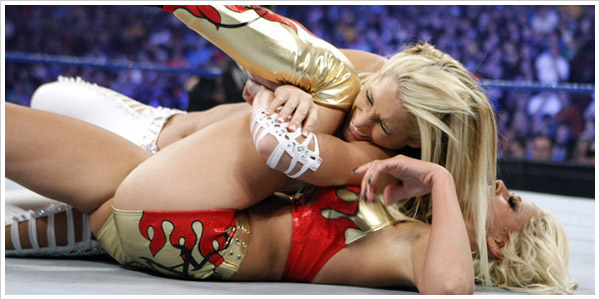 The first ever Divas Championship match at Unforgiven – and the first ever Divas Championship title defence – is in the books. The All American Girl, Michelle McCool retained her title against the French-Canadian hottie who just happened to dress like Iron Man, Maryse. What’s the verdict? I’d say it was positive. In SmackDown’s second pay per view outing, the stars aligned for our Divas at Unforgiven, making up for the lack of time and excitement at Great American Bash when Michelle first won her title by defeating Natalya. This time around, the two Divas involved really worked it out, using their surroundings well to make a fun match up, plus they were afforded more time than the Divas are usually given on pay per view. The result was a good match from the SmackDown blondes – if a lot sloppy at times.

All in all, I think the work was strong, there was a lot of movement and a lot of story told in this match with Maryse going after Michelle’s leg and such. Neither Michelle or Maryse are at Mickie James or Beth Phoenix level so I definitely expected some sloppiness, but I think these two overcame the odds and by the time the final bell rang, they delivered a good match. The action was fast paced which I did not expect from these two, they both showed a lot of athleticism and I think it’s a true testament to how SmackDown has developed. Anyone who reads my Raw or SmackDown Redux, knows that I think it’s great when the Divas go on the outside and get a little rough and this was Raw calibre right here. Given they are not the most experienced Divas on the roster, I think it was great that they took the risk and Maryse throwing Michelle over the barricade and then Michelle clotheslining Maryse jumping off the barricade. I don’t think I’ve seen the Divas really do that, sure they brawl on the outside and stuff but this took it to the next level.

The second half of the match told more of a story, which I appreciated, with Maryse working on Michelle’s knee and her more on the offensive. We’re used to see Michelle dominating matches, so it was a nice change of pace and we got to see some great work from Maryse. I knew from the outset that Michelle would win, but I feel both Divas got some equal time to show off their moves and even though Maryse lost, she got to work it out. As I was talking about in the live blog last night, seems as though Michelle has changed her “Wings of Love” from an Awesome Kong “Implant Buster” to a simple front suplex, it doesn’t look as good or as effective.

It could have used a little more crowd injection, I don’t think they were into the match. I have a feeling because not as many people watch SmackDown as Raw, maybe the audience isn’t as familiar with the SmackDown Divas? Or maybe they just straight up don’t like what they saw? But in all, I enjoyed the match and the work from both Divas.

Watch the match & see the photos after the cut: 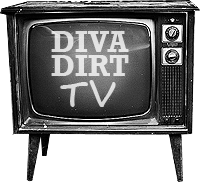